Another scandalous tale from the Down family

In previous Untold Lives stories, we met two of Major William Down’s children, Arabella and Charles.  Now, for the final instalment of this scandalous tale, we have their sister Eva Magdalene Crompton Down.

Eva was born in St John’s Wood, London on 18 December 1856, the fifth daughter and seventh of the ten children of Major William Down and his wife Christian.

In 1876 Eva was called as a witness in the trial of her brother Charles and Joshua Keith Hilton.  During the trial Hilton had referred to Eva Down as his wife and claimed to have a marriage certificate which he could produce as evidence.  Several other people called as witnesses also stated in their testimony that they believed Eva to be Hilton’s wife.

Eva was called as a witness regarding the claims which she vehemently refuted, her testimony suggesting she was unimpressed at the allegations and that she only knew Hilton as an acquaintance of her brother.  She even demanded to see the marriage certificate which Hilton claimed to have, but it never materialised. 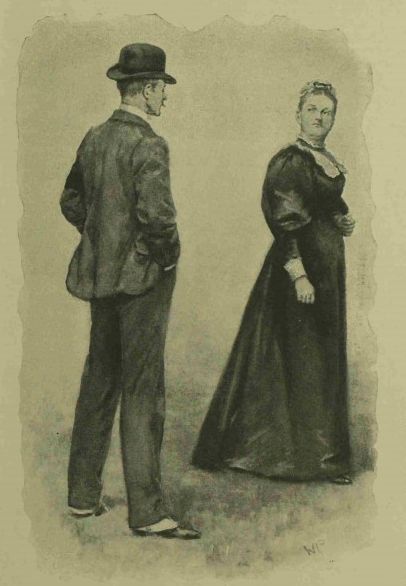 Eva may not however have been as innocent as her court testimony suggested.  In 1877 Mrs Margaret Ann Redhead, née Thirkell filed for divorce from her husband of seven  years, Joshua William Readhead, on the grounds of adultery and desertion, citing Eva Down as the mistress.  Mrs Redhead had met her husband while visiting London in 1870 and they had married there in secret on 23 November 1870.  She had returned home to Sunderland shortly afterwards but her new husband did not accompany her and she at first attempted to conceal the marriage before admitting everything to her parents.  She never saw her husband again and her correspondence with him ceased after he attempted to extort money from her mother.  In 1876 Mrs Redhead learned that her husband had been living under the alias Joshua Keith Hilton and had been having an affair with Miss Eva Down, who he had been pretending was his wife. She filed for divorce shortly after.

Eva Down clearly cared about her lover as the couple married in Carlisle in 1881 following his release from prison.  The marriage does not appear to have lasted long however as by 1900 Eva had emigrated to the USA with her husband William Robert Tymms and their daughter Salome.  US immigration records suggest the couple married in England in 1885, however there is no record of that marriage.  Eva died in Benton, New Hampshire on 29 January 1926.

William Joshua Redhead assumed another alias, this time the stage name of Howard Reed, and he became manager of the Ilma Norina Opera Company.  He was romantically involved with its star Ilma Norina (real name Josephine Genese) who herself had divorced in 1888.

Howard Reed, aka Joshua Keith Hilton, aka William Joshua Redhead died in Southend on 23 February 1899.   According to his obituary he was ‘deeply lamented by his sorrowing wife and children’ although which wife and whose children is another mystery.

A 19th century tale of adultery