The names of the leading proponents of Indian independence from British rule are well known, but the fight was carried on by many thousands of campaigners and activists who devoted their lives to this important cause.  One such campaigner was Bhicoo Batlivala. 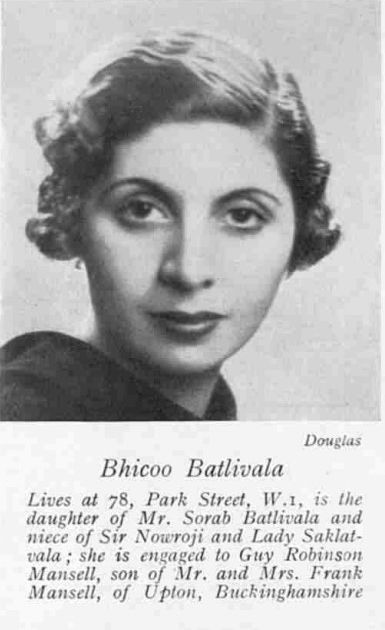 Bhicoo Batlivala was born in Bombay on 1 January 1911.  Her father, Sorabji Batlivala, was a successful mill owner.  When she was only ten years old she was sent to Britain for her education, where she attended the Cheltenham Ladies College, before studying law and becoming a Barrister of the Inner Temple in 1932.  In July that year, the Dundee Courier listed her in its piece on ‘Men and Women of Today’, describing her as ‘dark, slender, and with dark auburn hair and regular features’.  Intelligent with an adventurous spirit, Batlivala was also a pilot, and a keen player of polo and tennis. 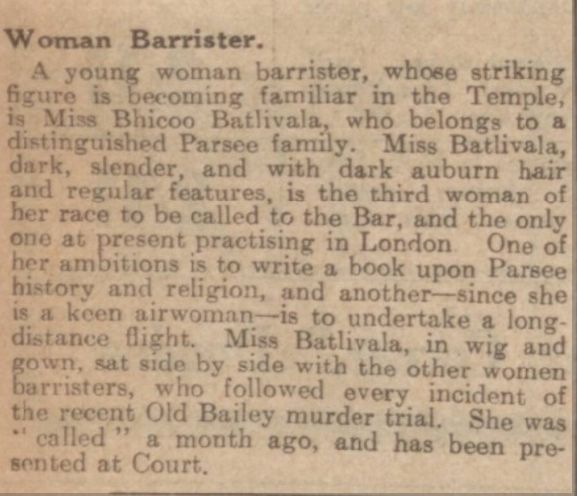 After practising as a barrister in the UK for a few years, she returned to India.  It was reported in British newspapers that she was the first woman to be admitted to the State Service of Baroda, where she held a variety of Government positions, including Inspector of Schools.  On returning to England, she married Guy Mansell in London in 1939.  They set up home in Cobham, Surrey.

Batlivala was an active member of the India League, an organisation founded in 1916 to promote the cause of Indian independence.  She regularly attended meetings throughout the 1940s, often as a speaker, a fact noted in Government intelligence reports.  She also became associated with Jawaharlal Nehru, at one point acting as his secretary, and campaigning for his release from prison.  In 1940, she embarked on a six month lecture tour in America causing the British Government considerable anxiety.

On 24 February 1943, Batlivala led a delegation of Indian women to the Central lobby of the House of Commons.  Once there they met several women M.P.s, and put their case for the release of Gandhi who had been imprisoned in India at the start of the Quit India Campaign.  The Derby Daily Telegraph reported that the Indian women wore ‘beautiful native robes’, and quoted Batlivala as saying ‘We are urging that the release of Gandhi should be put before the Government as a very urgent matter.  It is not a question only of Hindus or of one particular community.  Indians of all communities here are very deeply concerned about the present drift of the situation as it is being handled by the Government’.

In an article for International Woman Suffrage News, Batlivala highlighted the hypocrisy of Britain using India’s resources to fight the threat of Nazism, while denying India her own freedom.  She concluded; ‘The Indian people have repeatedly declared that they have no quarrel with the British people, but they will no longer tolerate a system of Imperialism.  If the British Government declares that its fight is for the liberation of all nations then it must liberate India.  The world is watching’.