Henri’s April Fool and other recipes

In 1950 the Manchester Evening News published ‘Henri’s April Calendar’, a selection of recipes for Easter by the newspaper’s cookery columnist.  Henri had put a pot of primroses on his book shelf, shed a top coat and muffler, and was thinking of cold meals to prepare until autumn.  Food was still being rationed in Britain, and Henri comments on some items being in short supply, for example ice cream.

One of the recipes was Henri’s April Fool.  Make and set an orange jelly, beat it until foaming, then beat again adding three tablespoons of top of the milk.  Split a plain sponge cake and spread one half with raspberry jam and a thick layer of sweetened apple purée.  Pile the jelly on top, decorate with sliced bananas or cherries.  Cut the other half of the sponge into fingers and spike round the dish.   Serve very cold.  Et voilà!

To make an Easter salad, Henri suggested a bed of greens, lettuce, cress, shredded cabbage heart and spring onions, with hard-boiled eggs laid in as if in a nest.  A yellow fluffy chick standing on guard ‘will amuse even grown-ups’. 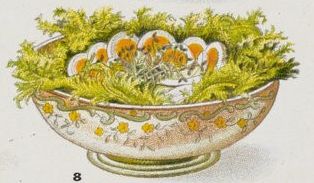 Children would be delighted with inch-sized bread cubes coated with cream cheese or honey, then rolled in crushed cornflakes and arranged in a nest of salad greens.

For Easter breakfast, prepare half a toasted hot cross bun with the centre slightly scooped out to form a nest for a poached egg sprinkled with chopped parsley.

Ice cream wafers were available again so Henri sandwiched them together with creamed or sliced cheese, sandwich spread, paté de fois gras, or simply butter seasoned with celery salt.   These could be served as an Easter appetiser with coffee or a ‘special drink’.

Henri thought that the man of the house might demand a hot meal at Easter,  so he recommended cooking the meat ration the day before. Slices then could be dipped in batter and breadcrumbs, fried quickly in dripping. and  served on a dish surrounded by roasted onions, grilled tomatoes, boiled new potatoes, and sprigs of cauliflower smothered in white sauce.  ‘Add a tin of peas if it’s an occasion.’

Sausages could be made ‘festive’.  Simply slit them and stuff with gherkins, mango, or mixed pickles.

Henri told his readers to cool off by eating cold tripe with boiled sliced beetroot, celery salt, mayonnaise, and lots of vinegar.  ‘It’s delicious, you know!’