In the late eighteenth and early nineteenth centuries Bath Hospital published the names, ages and places of residence for patients who had undergone mineral water treatments, and listed their maladies.  The Bath Chronicle and Weekly Gazette carried lists from the 1820s to the 1840s of discharged patients who were cured or ‘much better’.  A book published in 1787  described the case histories of 52 named patients suffering from a variety of ‘paralytic disorders’. 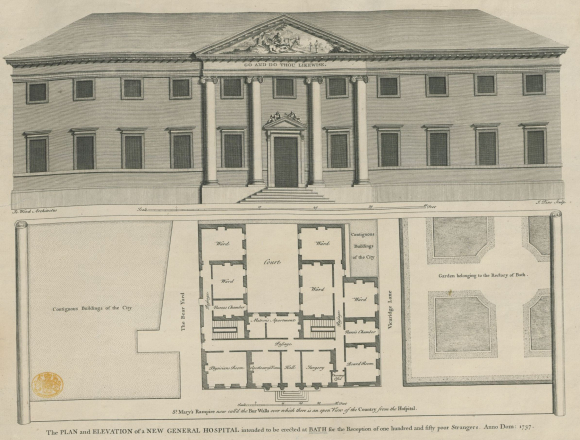 John Pine, 'The plan and elevation of a new General Hospital intended to be erected at Bath for the Reception of one hundred and fifty poor strangers Anno Dom: 1737' Maps K.Top.37.26.m

Bath Hospital was a charitable institution incorporated in 1739, established principally to extend the benefits of the mineral waters to poorer people.  The apothecary kept an accurate register of each patient’s name, age, place of residence, disease, date of admission, length of stay, date of discharge, and state of health on discharge.  Treatment was usually limited to a maximum period of six months, although extensions and readmissions were sometimes granted.  The majority of patients came from south-west England but there were some from further afield – for example London, Wales, Oxford, Shropshire, Kent, Hampshire, and Hertfordshire. From the title page of Bath Hospital Annual Statement 1858

The Hospital also aimed to publish its ‘experimental observations’ so that other physicians could gain knowledge of the use of medicinal waters.  Success in treating paralytic complaints encouraged the Hospital to compile a book of cases selected from its medical records, detailing the treatments given.  From January 1776 to December 1785, 1102 patients with paralysis were admitted.  Of these, 237 were cured; 454 were discharged much better; 142 better; 233 no better; and 36 had died.  It was noted that the waters were not very effective in treating ‘shaking palsies’.

William Toop of Frome suffered from paralysis after going into cold water to gather watercress.  David House, a cooper from Bristol, developed palsy after spending several hours bottling wine in a cold, damp cellar.  Both men were cured in a month.

John Evans from Salisbury was reported to have lost the use of his hands and arms from colic after drinking stale small beer in hot weather.  Evans spent thirteen months in Bath Hospital and was eventually discharged much better, but not cured.

Industrial injuries from contact with noxious substances were recognised and treated.  Several patients affected by working in brass foundries were cured.  Samuel Smith, servant to Mr Wedgwood in Greek Street, Soho, suffered from ‘dropt hands’ paralysis resulting from lead or copper in paint.  William Hinton from Gloucester was employed in pointing pins and the dust was said to have caused weakness in his hands and wrists.  James Lewis Markes of Stratford- le-Bow Middlesex was a house painter whose hands were paralysed by white lead poisoning.  After 50 weeks at Bath, he was able to dress himself, cut his food, write, and use scissors, but he could no longer undertake hard labour.

The Narrative also reports cases of paralysis caused by accidental poisoning, falls, being struck by lightning, hard drinking, fever, strokes, and sciatica.  Digitised versions of the book are available, so why not dip into the world of eighteenth century health and medicine?