William George Sibley was baptised in 1733 in Whitechapel, the son of George and Mary.  His father worked for the East India Company and rose to be keeper of the Bengal Warehouse in New Street.  This was a very responsible post, having care of the receipt, storage, sale and delivery of vast quantities of Indian textiles.  The Sibley family had accommodation near the warehouses provided by the Company.   George was a member of the Mercers’ Company and owned property in London and Wanstead in Essex. Both William Sibley and his younger brother George followed their father into the East India Company’s home establishment.  William joined the East India Company in February 1745/46 in his early teens as a writer (or copyist) in the Leadenhall warehouse where his father was keeper at the time.  In 1756 William was appointed 5th clerk in the Company Treasury at a salary of £60 per annum.  He then worked his way up the departmental hierarchy by virtue of deaths and resignations and was appointed Treasurer in 1788.  His salary leapt from £200 as a senior clerk in 1785 to over £1,000 in 1801 once his gratuity and perquisites were added to his basic pay. 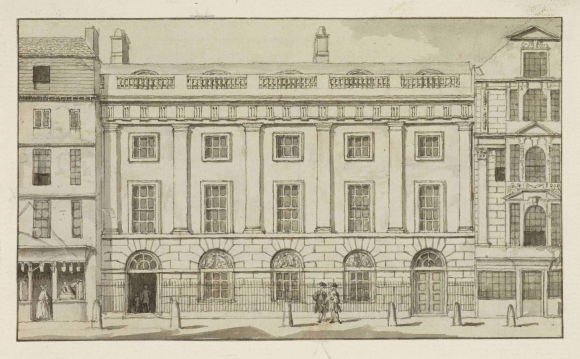 His brother George became a warehouse-keeper like their father.  The Sibley brothers also followed their father into the Mercers’ Company.  William was Governor in 1790 and George in 1791.

William married Abigail Scott at Wanstead in August 1771 and they had two daughters Mary and Susannah who both died as small babies.  In 1775 Abigail also died.  William remained a widower until March 1790 when he married Jane Amphillis Berthon, the daughter of a City merchant.  In the same year he was elected as Governor to the Foundling Hospital.  He was also a Governor of Christ’s Hospital and a fellow of the Antiquarian Society.

When Jane’s mother Amphillis Berthon made her will in 1791 she shared her property between two sons and two daughters and excluded Jane. William and Jane Sibley were simply each left a ring. Mrs Berthon explained in the will that her reason for excluding her daughter Sibley was not a want of regard – it was clear to see that she loved and esteemed Jane equally with her other children. But Jane was ‘very happily provided for and married to a worthy good man’.

William George Sibley died in March 1807 at his house at 7 Queen Square, Bloomsbury, not far from the Foundling Hospital.  He still held the post of Treasurer at East India House, having worked for the Company for 61 years.  His obituary in The Monthly Magazine echoed the sentiments of his mother-in-law: ‘In his official department he invariably discharged his duty with fidelity and assiduity, and in all respects with satisfaction to the company and honour to himself… In private life, a tender and affectionate husband, a steady friend to the deserving, kind to the poor, and benevolent to all… a truly good and upright man’. 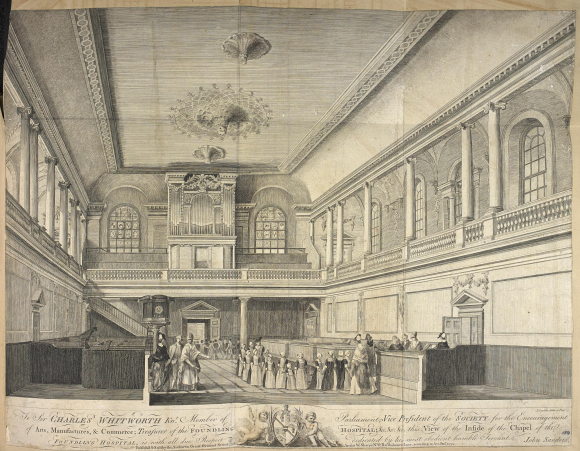 A view of the interior of the Foundling Hospital Chapel 1774 British Library Crach.1.Tab.4.b.3 Images Online