In 1786 tragedy struck the village of Badgeworth in Gloucestershire.  William Benfield, a labourer of ‘exemplary industry and sobriety’, bought a sack of wheat and took it to be ground at Bubb’s Mill near Alstone.  A ratcatcher had mixed meal with white arsenic to poison vermin and some of this was put by mistake into William’s sack. 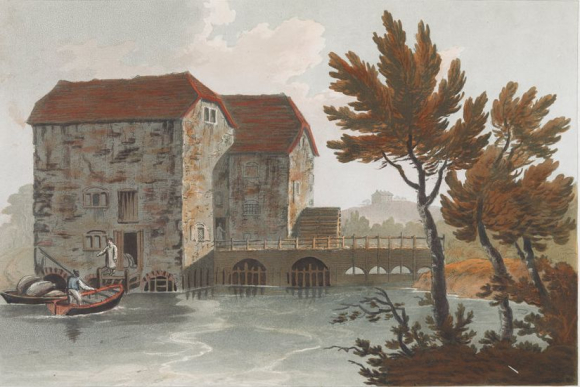 The flour was used for three weeks to make bread for William, his wife Esther and their children.  The family soon began to feel unwell, but had no reason to suspect that the bread was the cause.  When neighbours were taken ill after borrowing a loaf from the Benfields, the bread was tested and particles of arsenic discovered.

Physician Mr Clarke of Cheltenham was called to help the Benfields.  The medicines which he administered helped Esther and some of the children, but William and his sons John, 12, and Paul, 8, were taken to Gloucester Infirmary.  William died in great pain on 28 August 1786, about eight weeks after the flour was first used for baking.  He had probably eaten the largest share of the bread.  The Badgeworth burial register reads: ‘William Benfield was Buried August the 30 by being poisoned by Arsnick being put into his grist at Alston Mill’.

On 16 October 1786 John and Paul were transferred to Bath Hospital to be treated with mineral waters.  Their case is recorded in a book featured in an earlier blog post.  Their symptoms on admission were vomiting, sore stomach, thirst and dryness of the mouth.  The boys had begun to lose the use of their limbs, with both numbness and pain in the fingers and toes.  John could just about walk, but Paul was unable to support himself.  They drank the waters and bathed in them, with no other medicine prescribed except a gentle purgative when they arrived.  When the report in the book was written on 11 December 1786, both boys were said to be improving.  John was much stronger, whilst Paul could walk reasonably well without assistance and was improving daily.

However things must have taken a turn for the worst for Paul shortly afterwards because he died in Bath in the spring of 1787, aged 9.  He was buried on 15 March 1787 at Bathwick St Mary.

Esther re-married on 12 October 1787 to Edward Lane at Badgeworth.  They had at least two children together, Edward and Charlotte.

Benjamin Benfield, one of the children who had escaped serious injury from the arsenic, quit his job as a labourer and enlisted in the 3rd Regiment of Foot Guards in 1799.  He served in the Army for 20 years and fought at Waterloo.  Benjamin was discharged on pension in May 1819 because he had bad feet and was worn out.

Posted by India Office Records at 15:45:00 in Domestic life , Health