Gout Raptures – a War among the Stars

Today is May the Fourth – Star Wars Day.  To mark this, we are sharing a dramatic poem from 1677 entitled Gout Raptures … or an historical fiction of a War among the Stars. 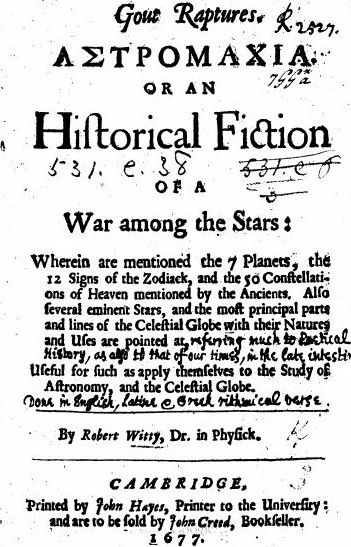 The author Dr Robert Witty explains in his introduction that he was laid up with gout in his hands and feet.  Unable to handle a pen or turn over the pages of a book, he fell into a contemplation of ‘the Stars and Constellations in Heaven’.  Witty thought up a story of a war amongst the stars since astronomers agreed that there were aspects of planets and fixed constellations which made them ‘contrary to each other’.  The result was Gout Raptures, written subsequently in idle moments and on journeys.

The star war started with a dispute between Saturn and Luna (the Moon).  Saturn was unhappy that a female ruled the night.  Saturn in Capricorn proclaimed war, and Luna in Cancer rose in opposition.

‘In Capricorn old Saturn
the worst of all the seven,
Design’d the Night to rule in spight
of all the Stars in Heaven.

His quarrel was at Luna
declaring his opinion,
None could but vex that the female Sex
should hold so large dominion.

She lowest of the Planets
the other Tropick claimed,
But down she shall, and catch a Fall,
and thus a war’s proclaimed.’

Jupiter supported Luna and sent out the Eagle and Beagle constellations to spy out Saturn’s forces.  On the advice of a council of all constellations, Jupiter raised two armies – a standing army of fixed stars and a flying army of planets.  War was declared and Jupiter found the rebels in Taurus with the Fiends of Hell and the Heathen Gods.  The rebels fled, pursued by Jupiter from sign to sign.

‘In stead of Pike and Pistol
they fought in fiery flashes,
What’s Cannon proof they pierced through
no Sword can make such gashes.’

When the rebels reached Scorpio, Cupid fired an enchanted arrow and put an end to the war.  All the stars fell in love with each other, and peace and quietness was restored.

Witty pointed out similarities in his story to the path of the English Civil War and the restoration of King Charles II.  Gout Raptures had English, Latin and Greek versions in one volume so that schools could use it.

Robert Witty or Wittie (c.1613-1684) was born in Beverley, Yorkshire.  A friend of the poet Andrew Marvell, he became a schoolmaster and then a physician, practising in Hull and York before moving to London.  He also published Popular Errours … in Physick, a translation of James Primrose’s De vulgi in medicina erroribus, and wrote Scarbrough Spaw, a book championing the efficacy of mineral waters.

Further reading:
Robert Witty, Gout Raptures. Ἀστρομαχια. Or an historical fiction of a War among the Stars (Cambridge, 1677).  A verse in English, Latin and Greek.  Available to read online.