One day in early August 1735, a woman arrived at the London home of Sir Hans Sloane, letter of introduction in hand.  Social networking etiquette required such a document when approaching a new acquaintance.  And, Elizabeth Blackwell hoped to connect with Sloane, who was linked with numerous networks of knowledge, and acquire his support.  Some 280 years later, that letter is held by the British Library and identified as Sloane MS 4054, f. 90. 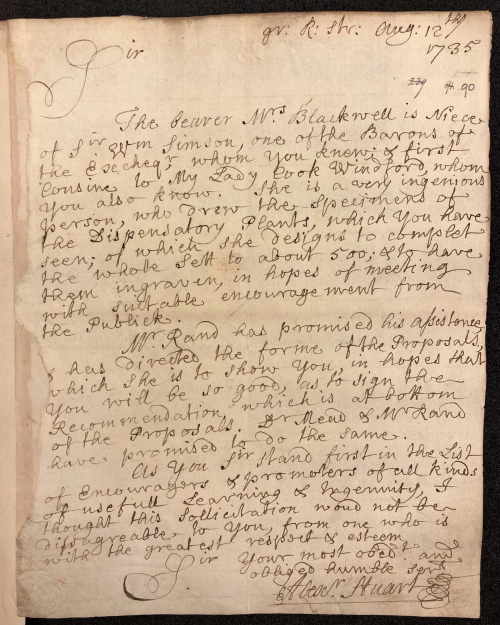 One of Sloane’s close colleagues, a Scots-born physician named Alexander Stuart, had written it on Blackwell’s behalf.  But even before stating the reason for her visit, Stuart assured Sloane that 'Mrs. Blackwell' merited his consideration. She was, he wrote, the 'Niece of Sir Wm. Simson, one of the Barons of the Exchequer, whom you know; & first Cousine to My Lady Cook Windford, whom you also know'.  She was, then, a gentlewoman who could be linked to persons familiar to Sloane.

With those salient points covered, Stuart explained why Blackwell wished to see him.  She was working on a project, and Sloane’s endorsement would be of great help.  A 'very ingenious person', Blackwell wanted to draw a set of about 500 plants from the most up-to-date (1721) edition of the Dispensatory of the Royal College of Physicians.  Blackwell also had with her a proposal for the project. In all likelihood, it was similar to those drawn up by persons who were writing books that they wanted to sell by subscription.  Its wording probably resembled the text of an advertisement that ran in the London Evening Post on 9-11 October 1735: 'This Day are publish’d PROPOSALS For PRINTING by SUBSCRIPTION, A Curious Herbal'. 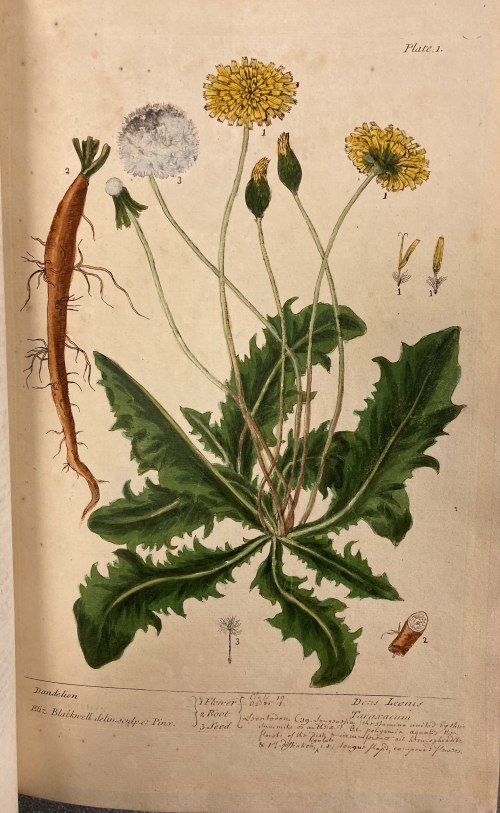 Stuart’s letter also noted that the document had space at the bottom for signatures of endorsers – akin, perhaps, to the page that is found in volume one of effectively every copy of A Curious Herbal.  The apothecary Isaac Rand had composed the proposal for Blackwell and, along with the illustrious Dr Richard Mead, had promised to sign it.   Would Sloane also 'be so good as to sign the recommendation'? 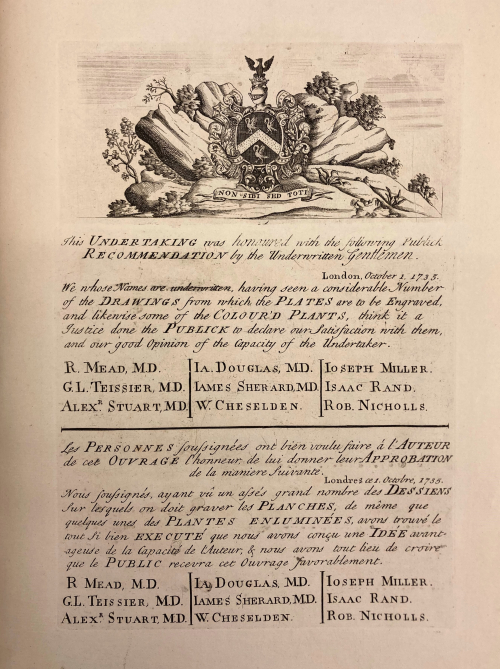 This page of Publick Endorsements likely resembled the one that accompanied the proposal that apothecary Isaac Rand wrote for Blackwell. A Curious Herbal (London: Charles Nourse, 1782), vol. 1. 445.h.6.

As it happened, no.  But Sloane would help Blackwell in other ways, which were cited in the dedication that she composed to him – one that was engraved and printed on pages found in various copies of A Curious Herbal.  Likewise, Blackwell would compose dedications to Stuart, Mead, Rand, and six other men who contributed to her undertaking. Sloane didn’t sign Blackwell’s recommendation but he helped her in other ways, as noted in this dedication. Joseph Banks’ copy of A Curious Herbal (London: Samuel Harding, 1737), vol. 1, after plate 96. 452.f.1.

What other insights might Stuart’s letter provide into A Curious Herbal and Elizabeth Blackwell?  If nothing else, its references to Blackwell’s uncle and cousin (whom, research indicates, lived in or near London) cast some doubt on claims that she was from Aberdeen.  Without wishing to wound Aberdonian pride, the possibility cannot be discounted.