Sadi, servant to the Sulivan family

On 11 July 1787 a young Indian servant named Sadi was sentenced to death at the Old Bailey after being convicted of stealing bank notes to the value of £400 from his employer Stephen Sulivan.  William Morris was tried for receiving the stolen notes and was defended by barrister William Garrow.  Morris was also found guilty by the jury, but sentencing was delayed in his case because of a legal uncertainty. 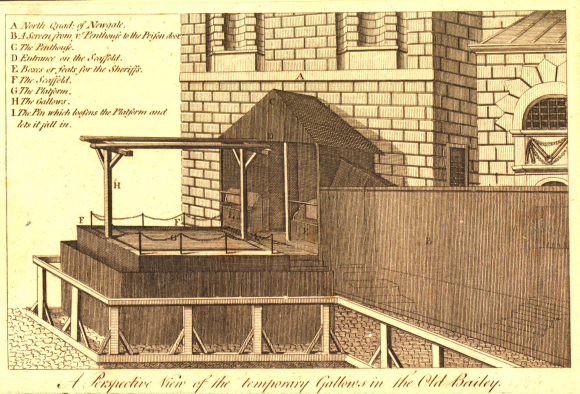 ‘A Perspective View of the temporary Gallows in the Old Bailey’ 1794 © The Trustees of the British Museum Asset number 765670001 - View of the scaffold and gallows outside the north quad of Newgate Prison; a screen on the right leading up to entrance to scaffold, with gallows over platform.

Sadi, also known as George Horne, was a footboy in the Sulivan household in Harley Street, London.  Stephen Sulivan’s father Laurence had been a prominent East India Company director and politician.  Having served the East India Company in Madras and Calcutta, Stephen returned to England in the summer of 1785 with his wife Elizabeth and son Laurence.  The Sulivans brought Sadi with them as he had attended Laurence since his birth in January 1783 and was a favourite of the family.  They wished to preserve Sadi’s ‘simple manners’ and ‘innocent mind’ from corruption by their other servants so he stayed in the nursery, eating and sleeping with his charge.  He had unrestrained access to the private apartments of the house.

However in 1787, Sadi began behaving with ‘repeated irregularities’.  The Sulivans dismissed the young man, intending to send him back to India.  Whilst awaiting a passage in an East Indiaman, Sadi was sent to lodge with Thomas Saunders, the assistant keeper of the East India Company’s tea and drug warehouse.

It came to light that Sadi had been stealing from the Sulivans for two years – muslins, silks, calicos, linen, pearls, clothing, and a special shawl belonging to Elizabeth.  The stolen goods were passed on to other servants in the house who encouraged Sadi to continue with his thefts.  He stole four guineas without being detected and then one bank note for £1,000 and two for £200.  When Sadi showed the £1,000 note to two of his fellow servants, they told him it was too great a sum to pass on without detection.  After keeping it for some days, he threw it under the kitchen grate where it was found by the housekeeper who gave it to Elizabeth.  The notes for £200 were sold by Sadi for a guinea to William Morris, formerly butler to Stephen’s father.

Elizabeth called on Sadi at his lodgings.  He burst into tears and made a full confession, directing her to Morris’s home in Petticoat Lane.  She went there with a constable and Morris’s wife handed over the two bank notes.

Other servants of the Sulivans were also arrested and charged with receiving stolen goods: Thomas Absalom, his wife Martha, and Catherine Smith.  Martha Absalom was apprehended at Maidenhead in Berkshire and found to have property belonging to Elizabeth Sulivan.

On 24 August 1787, the King granted Sadi a reprieve from the death sentence passed on him.  The young Indian remained in Newgate prison but he died shortly afterwards on 9 December.  The death rate in Newgate was extremely high in the late 1780s because of severe overcrowding and an outbreak of ‘gaol fever’ (epidemic typhus).

A few days after Sadi’s death, the case of William Morris was finally settled. He was discharged because the judges agreed with his defence counsel that the bank notes he had received could not be classified as goods and chattels, the term used in the charge against him.