In a previous post we explored the story of Catherine Grand, whose marriage to George Francis Grand at Chandernagore on 10 July 1777 is recorded in the Bengal Parish Registers.  We know from the annotated entry that Catherine married the famous French politician Talleyrand, but can we find out more about her first husband? 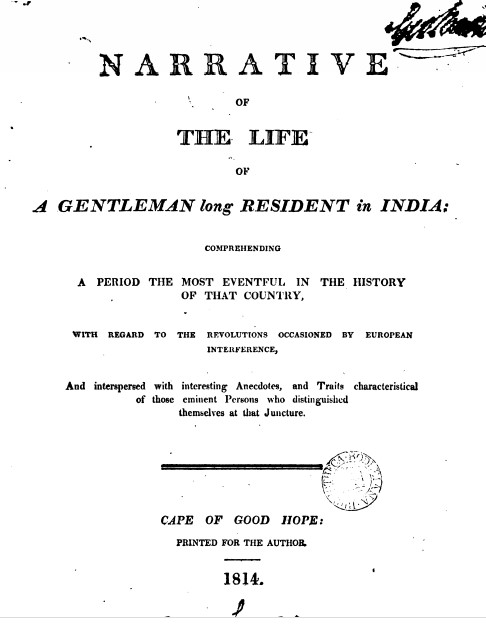 We can piece together much of Grand’s life, not least because he wrote Narrative of the life of a gentleman long resident in India.  George Francis (sometimes François) Grand was born sometime after 1750, son of Jean Jacques (John James) Grand, a merchant from Lausanne, Switzerland, and his wife Françoise (Frances) Elizabeth Le Clerc de Virly.  He was educated in Lausanne and apprenticed in London, before entering a military cadetship to Bengal in 1766.  He achieved the rank of Captain, but resigned his military service in March 1773 owing to ill-health and returned to England.  In 1775, through the auspices of family members, Grand was nominated for a writership with the East India Company and sailed again for India, arriving in Bengal via Madras in June 1776.

Grand met and courted the teenage Nöel Catherine Werlée (sometimes Verlée or Varle) at Ghireti House, the home of Monsieur Chevalier, Governor of the French Settlement at Chandernagore.  According to George’s account the couple were blissfully happy after their marriage.  By the end of 1778 however, Catherine’s liaison with the politician Philip Francis had been revealed (amid secret night-time assignations, ladders over walls, and scuffles with servants), and the couple were mired in scandal.  Despite her protestations, George effectively banished his wife and successfully sued Francis in court for ‘criminal conversation’ or adultery.  He was never to see his wife again.

Despite the scandal revealed by the Court case, Grand was appointed as Collector of Tirhut and Hajipur in 1782, probably as a result of his acquaintance with Warren Hastings.  Whilst in Bihar, Grand promoted and invested heavily in indigo manufacture. In 1788 he was appointed Judge and Magistrate in Patna.  However, he was warned by the East India Company that he had to give up his indigo concerns.  His failure to do so led to his eventual removal from the Company’s service, much to Grand’s chagrin.  His appeals to the Company unsucessful, he left India for good in 1799.

Having returned to Europe, Grand certainly visited Paris.  However, he states categorically that he did not see his divorced wife Catherine.  There appears to have been contact though: in 1802, Grand was appointed to a position with the Dutch Government at the Cape of Good Hope.  His position appears to have been procured at the behest of Catherine, and with the influence of Talleyrand.  It certainly removed George Francis far away.  After experiencing some initial hostility at the Cape, Grand had to content himself with a vague position consulting on matters relating to India trade.  By 1806, under the British Government, he was appointed Inspector of Woods and Lands. 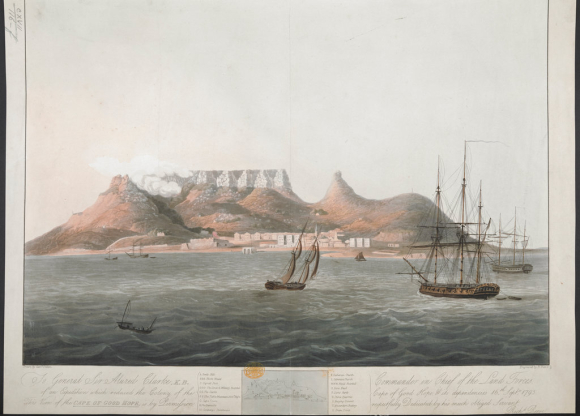 Grand married for the second time in 1804 to Egberta Sophia Petronella Bergh (1781-1839) of Oudsthoorn.  He died in Cape Town in January 1820.   In his book he writes: ‘You know the sequel – happy in my second choice of a partner,  I upbraided not the worldly opportunity lost.  May you be blessed in the like manner, should it ever be your lot to deplore as I did the cruel separation which forced me from the first’.