Personal Reflections on the Indian Political Service – Part Two: Life in the Gulf

This is the second of three blogs on Mss Eur F226, a collection of memoirs written by former members of the Indian Political Service (IPS).

Ten officers’ memoirs from Mss Eur F226 document service in the Persian Gulf and were recently digitised for online publication by the British Library Qatar Foundation Partnership.  Of these ten officers, all except Herbert Todd (1893-1977) were born between 1900 and 1915.  Naturally, they all served in the IPS, although several began their careers in the Indian Civil Service (ICS).  Some transferred to the British Diplomatic Service following Indian independence.  Their memoirs mainly cover the period 1920-47; a few officers also record their post-IPS careers and even their years spent in retirement.

It was common for an IPS officer to be posted to the Gulf for the first time at a relatively early stage in his career, usually to a junior position.  John ‘Jack’ Bazalgette, who arrived in Bushire [Bushehr] in the mid-1930s to take up the post of Under-Secretary at the Political Residency, remembers how a lack of work led to him being tasked with ‘sorting over the archives which dated back to before 1750 and were fascinating’.  It is intriguing to read of officers stumbling upon little-known details in the archives, much as cataloguers and researchers do today with the same material. 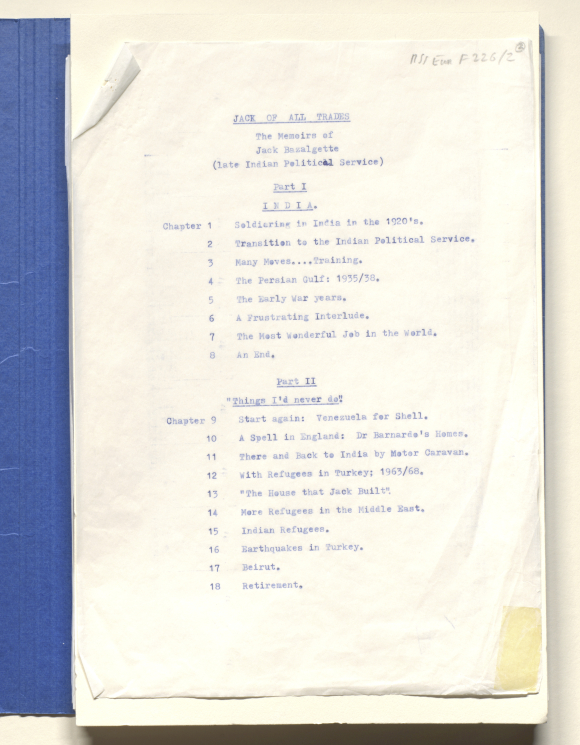 The tedious nature of imperial administration is well documented , and several memoirs describe a dearth of stimulating work, although perhaps this was a matter of opinion.  Hugh Rance, who was Assistant Political Agent in Bahrain just after the Second World War, found the work ‘interesting and extremely varied’, whereas his predecessor Michael Hadow describes it as ‘stultifying.’

In their spare time, many officers pursued the same leisure activities to which they were accustomed back home, albeit with notable differences.  Officers recall playing tennis and golf on ‘baked mud’ surfaces in Bushire.  While serving in Bahrain, Hugh Rance played in cricket matches against teams from the Royal Navy, the Bahrain Petroleum Company and the British Overseas Airways Corporation, on concrete or gravel pitches.

Some officers write of feeling isolated in their Gulf locations, whereas others describe active social lives.  According to Rance, Bahrain in the 1940s was ‘a great meeting place’, with many British officers and their families passing through, as well as British and United States expatriates arriving as oil company employees.  He remembers being out ‘nearly every night at some party or other’ when the weather was good. 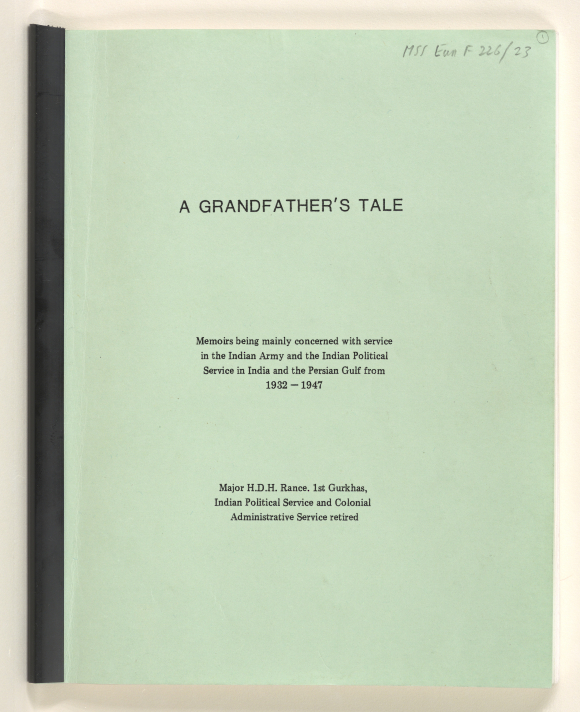 Front cover of Hugh Rance’s memoir, 1984. Mss Eur F226/23, f. 1.  The copyright status is unknown.  Please contact copyright@bl.uk with any information you have regarding this item.

Unsurprisingly, the memoirs discuss the weather and climate at length.  There are numerous accounts of sleeping on roofs and bathing in irrigation tanks in attempts to stay cool during the summer months.  Some found it too much, took extended leave and never returned.  Others stayed on, until replaced by their equivalents from the Foreign Office in 1948.

In sum, these ten memoirs provide a unique insight into one generation’s experiences of living and working in the Gulf during the last years of British India.