The Development of Pakistan

The India Office Records contain many important files relating to the history of South Asia pre-1947.  One such file documents the early development of the idea of the new nation of Pakistan.

The idea of Indian Muslims constituting a separate nation within India equal to that of a Hindu nation went back at least to the 19th century and the work of Sayyid Ahmed Khan.  However it was the writings of the poet Muhammad Iqbal who gave concrete expression to the concept of an autonomous political Muslim state in the north-west of India.  The idea gained popular ground throughout the 1930s and early 1940s, representing for many the idea of a modern nation state for India’s Muslims and a symbol of Muslim identity. 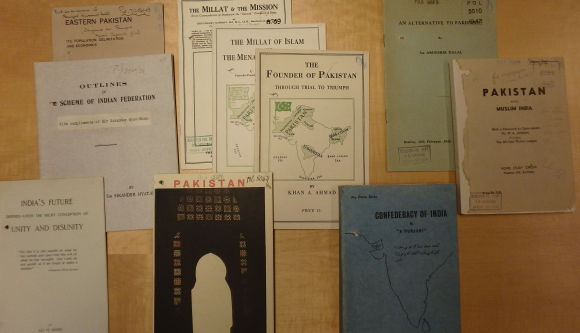 Booklets on alternative schemes to replace Federal provisions of Government of India Act, 1935, including advocacy of Pakistan, 1933-1946, shelfmark IOR NEG 584.

During this period, the India Office received copies of publications by groups and individuals outlining their conception of what they thought Pakistan should be, or in what ways India’s constitution should be reformed to take account of its different communities.  Some of the booklets were submitted by leading figures in India such as Sir Ardeshir Dalal and Sir Sikander Hyat-Khan, and there is even a booklet on ‘Pakistan and Muslim India’ with a foreword by M.A. Jinnah. 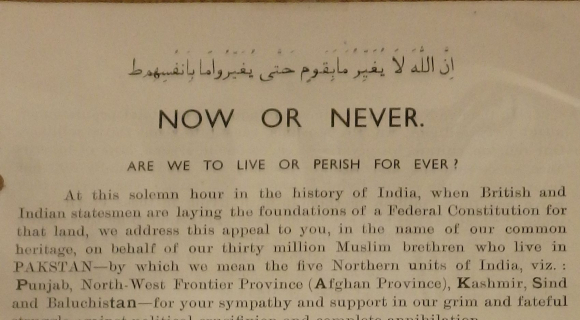 Beginning of Now or Never: Are we to live or perish forever?

The file contains the pamphlet entitled Now or Never: Are we to live or perish forever?  Issued in 1933 by Choudhary Rahmat Ali, a Punjabi student at Cambridge, it outlined a plan for a separate Muslim state outside India.  He even suggested a name, ‘Pakstan’, meaning ‘land of the pure’ from the Persian pak for pure; and also an acronym for the areas in northwest Indian in which Muslims were in a majority: Punjab, Afghan (North-West Frontier) Province, Kashmir, Sind and Baluchistan.  The same year, Rahmat Ali founded the Pakistan National Movement in order to build political support for the creation of Pakistan.  Included in the file is his circular letter of 8 July 1935 with a small map in the letterhead illustrating what he envisaged Pakistan to be.  He would continue to campaign for a separate state for Indian Muslims until his death in 1951, with his proposed schemes becoming ever more elaborate.  Inevitably he was disappointed with the Partition plan accepted by the Muslim League in 1947, publishing 'The Greatest Betrayal: How to Redeem the Millat?' in response. 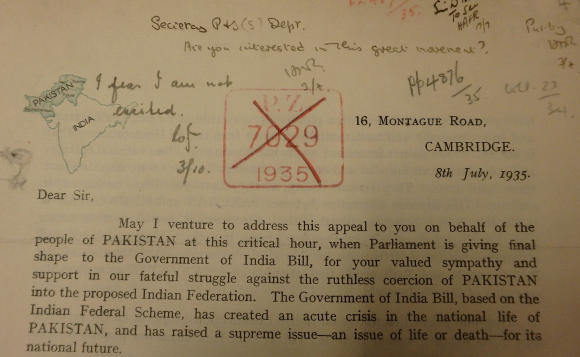 The file also shows the Viceroy and the Government of India, and the British Government through the Secretary of State, struggling with increasingly rapid constitutional developments in the final years of British India.  As such it is a valuable file for the study and understanding of the end of British rule in India and the subsequent Independence of India and the creation of Pakistan.