As we wait for the Euro 2020 final between England and Italy, I thought I’d look for stories about the earliest matches between the two countries in the British Library’s newspaper collection.

The first match between the two sides took place in May 1933 in Rome.  The result was a 1-1 draw.  The Sunday Pictorial published this picture ‘received by photo-telephony’ of the England goalkeeper Hibbs punching out the ball. 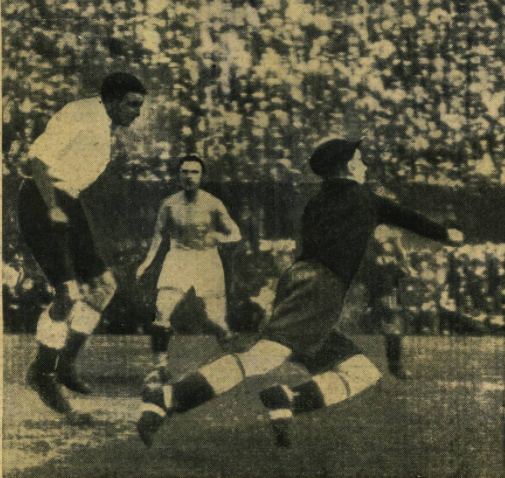 In November 1934, the Weekly Dispatch reported that touts were charging £2 2s for tickets for the forthcoming England-Italy match at Highbury when the cheapest official entry fee was 2s.  Touts were expected to ask prices as high as £5 for the best seats just before kick-off.  England won 3-2.

The next match was held in Milan in May 1939, resulting in a 2-2 draw.  The President of the Italian Federation of Football, Lt Gen Giorgio Vaccaro, expressed the belief that the tie would help to cement the friendly relationship between the two countries.

Italy and England played their first fixture after World War II in Turin in May 1948.  The score was 4-0 to England.

The teams played again in November 1949 at White Hart Lane: England won 2-0.  Two boys from City School Lincoln were suspended by their headmaster for taking a day off to attend the match.  Jeffrey Poole, 14, and Peter Wheatley, 13, had gone with a small group of choirboys led by the Rev R F Walters, curate of St Swithin’s Church.  Their parents and the curate believed that the punishment was too harsh.  Jeffrey and Peter had no regrets, showing reporters a treasured souvenir programme and sharing memories of an exciting trip to London.  The boys were allowed to return to school after their parents wrote to the head regretting their action and promising it would not happen again.

Posted by India Office Records at 09:30:00 in Leisure , Newsroom