A captain goes down with his ship!

On 25 November 1865 the ship Great Britain slipped its anchor at Madras and, as directed by the signals from the Master Attendant’s Office, headed out to sea.  It would be the last time anyone would see the ship.

There were a few things that made the fate of the Great Britain unusual.  Firstly the weather following the ship’s arrival at Madras on 20 November had been worsening by the day and there was warning of an impending cyclone.  On 23 November the crew had been forced to cease unloading cargo as the weather  conditions had rendered communication with the shore too dangerous.  Only about 55 tons of the cargo had been unloaded, leaving about half of the contents of the hold still on board.

Secondly the deteriorating weather had meant that by the evening of 23 November vessels were unable to pass the surf in the harbour, stranding people ashore.  These included William Murton, captain of the Great Britain.

Under these circumstances, there should have been no reason for the signals to be given for the Great Britain to set sail. But just after 7am on 25 November the ship left the harbour and headed out to sea, despite not having the captain on board.

Shortly afterwards, the weather claimed its victim and the Great Britain sank.  Fortunately there were no casualties and everyone was safely rescued.

For William Murton this would be his one and only commission as captain of a ship.  In February 1866 he lodged a protest with the Notary Public in Madras against the official account of the sinking of his ship which had implied negligence on his part.  He presented his account of the events of 21-25 November 1865, and concluded by stating that:
‘all losses and damage were occasioned by the bad weather and occurrences and not by the inefficiency of the said vessel or the default of the appearer William Murton, his officers or any of his mariners’. William Murton was born in Faversham, Kent in August 1834.  He had entered the maritime service on 30 May 1850 as a midshipman aboard the Nile, and he rose through the ranks receiving his master’s certificate on 22 September 1864.  He was appointed captain of the Great Britain on 1 February 1865. 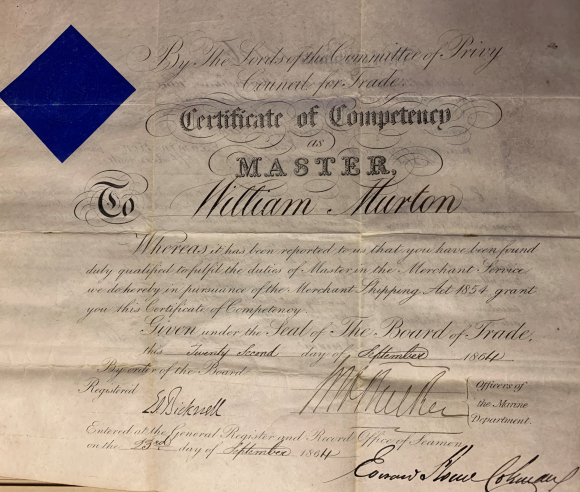 Murton returned to England shortly after the loss of the Great Britain and retired from the maritime service.  He married Charlotte Augusta Emma Grant, daughter of the late Lieutenant Colonel Charles St John Grant, on 28 June 1866 at St John’s Church in Paddington.  The couple had three daughters: Mary, Fanny Seringa and Amelia Augusta, and one son Herbert William Grant.  Sadly Fanny and Herbert both died in 1876 aged eight and six respectively.  Fanny Seringa was named after the ship Seringapatam, in which Murton served from 1860-1862.  This was a surprisingly popular girl’s name which has been the subject of previous Untold Lives blog posts - My daughter Seringa and More girls called Seringa!