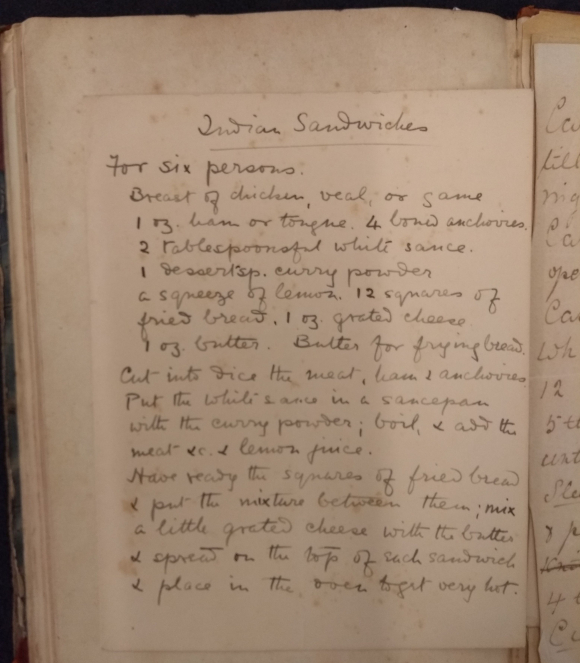 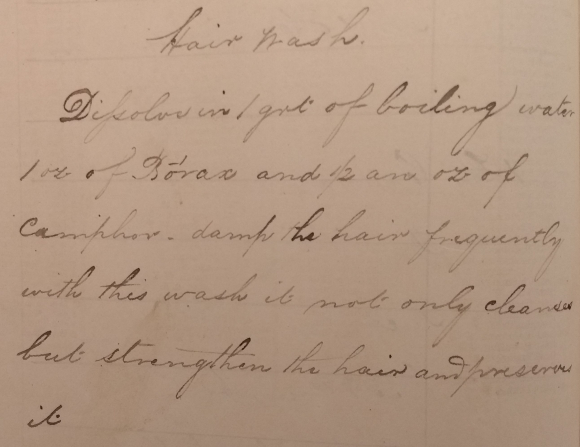 There are also recipes for hair wash and soap jelly, instructions for knitting a jumper and for making Brigadier James’s cholera cure.  The cure consisted of cloves, cardamom seeds, cinnamon, and sugar candy ‘bruised up together’ and added to a bottle of best brandy.  This mixture was then set alight and reduced by a half.  After standing for a day, it was strained and bottled.  Dosage was a teaspoonful for ‘a little derangement’ and a tablespoonful (or even more) for more severe illness.

Who was Mrs Carthew?  The most likely candidate appears to be Jemima Borland Carthew, wife of Morden Carthew of the East India Company's Madras Army.  The family was linked to Burma in the early 1860s when the book was created. Major General Carthew was appointed Divisional Commander of Pegu Province in Lower Burma in 1861.  The Carthews’ daughter Jemima Fanny was married in Rangoon in July 1862.

Jemima Borland Carthew (née Ewart) was born in Scotland on 4 September 1810, the fifth and youngest daughter of John Ewart.  She sailed to India in 1826 and married Lieutenant Carthew on 16 July 1827.  They had ten children born between 1828 and 1847, three of whom died in infancy.

At the time of the 1861 census, Mrs Carthew was lodging in Cheltenham with five of her children.  Morden Carthew returned from Burma on leave to England in early 1863.  He did not resume his career in India.  On 19 April 1863 Jemima Carthew died at 64 Baker Street London aged 52.  The cause of death was given as ‘Softening of Brain, Paralysis’.  She was buried on 22 April 1863 at All Souls Cemetery, Kensal Green. 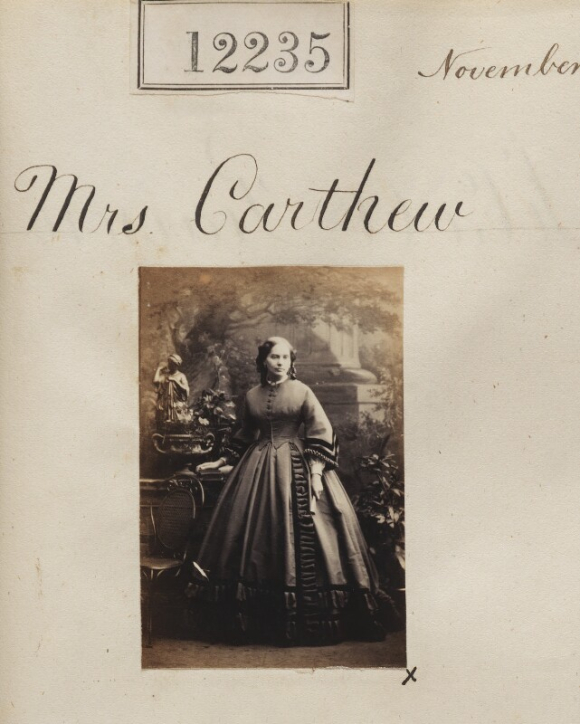 There is another Mrs Carthew who might possibly have owned the original recipe book - the wife of Jemima's son Morden, who also served with the Madras Army in Burma.  Maynard Eliza Charlotte Rochfort Bogle married Morden Carthew junior in 1854 in Moulmein.  Her father Sir Archibald Bogle was Chief Commissioner of the Tenasserim and Martaban Provinces. The Carthews'  two elder children were born in Burma, but their son Morden Ewart was born in Marylebone in 1858.  Morden Carthew resigned from the Army in March 1862.  In November 1862 the above photograph of ‘Mrs Morden Carthew’ was taken by Camille Silvy who had a portrait studio in London.