Peter Paul Zohrab: a ‘Secret and confidential Agent’ for the East India Company

Amongst the India Office Political and Secret Department miscellaneous papers are four items of correspondence from 1808-1809 relating to the appointment of Peter Paul Zohrab as a ‘Secret and confidential Agent’ to the East India Company.  His mission, according to the letters, was to travel to Ottoman territories ‘to gain a knowledge of the proceedings and intrigues of the French in Turkey with reference to any designs that Nation is supposed to entertain on the British Possessions in the East Indies’.  During the Napoleonic Wars the East India Company and the British Government were anxious with regard to French intentions towards India. 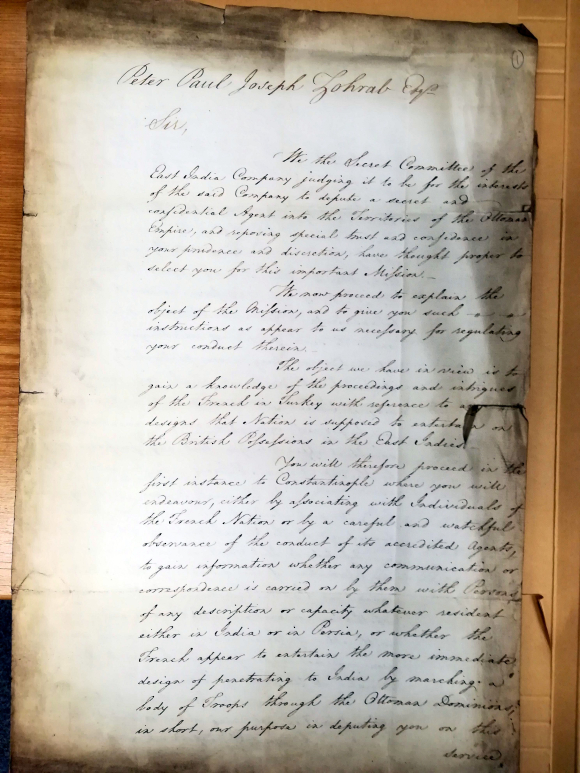 Instructions dated 12 January 1808 directed Zohrab to travel to Constantinople (Istanbul) in the first instance.  His task was to associate himself with any French people and ‘accredited Agents’ of the French, observe them and gather information – particularly any possible plans to march troops towards India. In addition, the East India Company’s Secret Committee gave Zohrab authority to travel into Armenia and Persia if necessary for further gathering intelligence.  Of particular interest was the newly established French Embassy in Persia, established as part of a Franco-Persian accord between Napoleon and the Shah of Persia.  As Peter Paul Zohrab was a merchant, he was specifically instructed to carry out his travels and observations only under that guise.  The Secret Committee advised him not to make himself known to the British Minister at the Persian Court.  He was also warned not to commit anything in writing that might reveal the true nature of his travels.  Indeed, the original instructions were to be returned to the Secret Committee after Zohrab had ‘impressed the substance of them on your memory’. 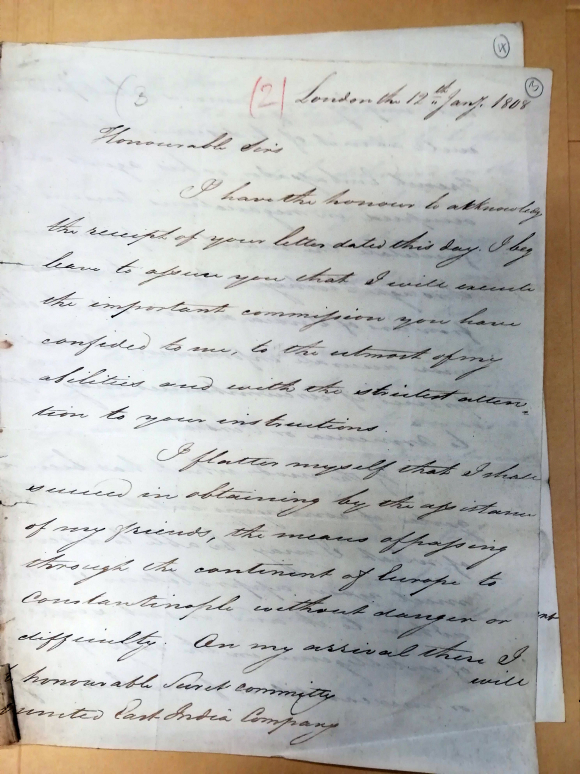 For his intelligence gathering activities, Zohrab was given a salary of £500 per year, with an additional payment of £500 per year for travelling and other expenses.  He was appointed for two years.  A system was set up whereby payments and correspondence would be channelled through John Green, Zohrab’s agent in London.  Green was to forward Zohrab’s letters unopened to the Chairman of the East India Company if addressed in a particular way.  Zohrab’s letters to the Secret Committee appear to have not survived, though their receipt can be tracked in the Secret Committee Minutes.  We know he left for Malta on 20 February 1808, and travelled on to Constantinople.  His mission however was cut short due to the changing political landscape; a letter from the Secret Committee dated 11 April 1809 informed him that his appointment was to cease on 10 February 1810 as there was now peace between Britain and the Ottoman Empire.

We know little of Zohrab’s background and career.  He may have been the son of Paul Zohrab, dragoman (translator, guide) to the Danish Embassy in Constantinople.  The East India Company have him as Peter Paul Joseph Zohrab, other sources refer to him as Peter Paul John.  He married his first wife Elizabeth Hitchens in St Pancras, London, in September 1807 – five months before his expedition to Turkey.  He then appears as a merchant in Malta, where he married his second wife Frances Williams in September 1816.  By 1830 Zohrab and his family were living in Smyrna (now Izmir), when he was appointed as a dragoman to the consulate at Erzerum.  In 1844, he was appointed to the position of dragoman in the consulate at Trebizond (now Trabzon).