As the world watches the athletes speeding round the Olympic velodrome, we’ve been looking back at the late 19th century when the sport of cycling was still in its infancy. 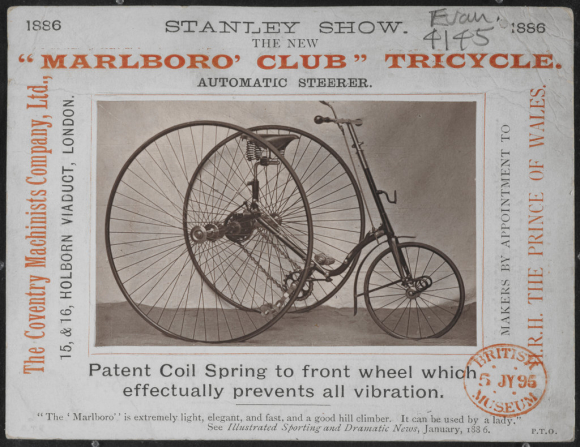 The new Marlboro' Club tricycle 1886 - “The 'Marlboro' is extremely light, elegant, and fast, and a good hill climber. It can be used by a lady". British Library Evan.4145 Images Online

Tricycles were widely considered to be more suitable for women than bicycles.  Athletic News stated on 3 August 1881 that almost any ‘conceivable condition of female costume’ made riding a bicycle out of the question, more of an acrobatic feat than a useful accomplishment.  Tricycles were becoming increasingly popular with women, with Queen Victoria said to have bought machines for her granddaughters.  According to the Cornishman, there were over 100 distinct makes on the market by the end of 1881.

The spread of cycling amongst women was welcomed by Athletic News: ‘there cannot be the slightest doubt that ladies will be better and more healthfully employed in riding their tricycles along the highways and byways, where they can listen to the music of the birds and breathe the fresh air of Heaven, than in dawdling away their time in drawing-rooms and boudoirs, or in flirting at picnics and garden parties’.  The Liverpool Weekly Courier commented on the advantage of a vehicle which could be used at a moment’s notice 'without servants or horses’.  Propelling and steering the tricycle could be mastered in an hour.  Although the exercise was tiring at first because it used a fresh set of muscles, it quickly became easy and ‘delightful to women who are organically sound’.

A Tricycle Club for men and women was started in Kensington in London.  Meetings took place every Saturday.  A 50-mile race was organised for September 1879 with a special prize for the first woman to complete the distance, and silver and bronze medals for the runners-up to her.  The ladies of the Kensington club wore a navy blue serge dress and a felt deerstalker hat.

Victorian women’s clothing could be a problem when riding a tricycle.  In 1882 a woman out on a ride near Tring was thrown into the road when her dress became tangled in one of the wheels.  She was severely shaken and couldn’t carry on. A man passing in a trap helped her into town.

Newspapers passed on advice about suitable clothing for lady tricyclists so that they could avoid accidents or ‘loss of dignity’.  Samuel Brothers of Ludgate Hill London patented a special costume, ‘The Velocipedienne’.  This had strings to gather superfluous fullness in the skirt and a let-down fold which gave an extra six or seven inches to cover the feet and ankles.  It gave ample room for the knees to work.  In 1882 the Rational Dress Society recommended that lady tricyclists wore their new divided skirt which gave freer use of the legs and less resistance to the wind.