A recent acquisition to the India Office Private Papers gives a glimpse into the daily work of administrators in the Military Department of the East India Company.  The acquisition is a small bundle of enquiries known as Soldiers’ References.  These enquiries, received from soldiers or their relatives, covered a wide range of subjects and would have been a substantial part of the Department’s daily business.

The India Office Records contains a much larger collection of these enquiries as part of the records of the Military Department, dating from 1860 to 1873.  The subjects of the enquiries include the whereabouts of soldiers; applications for medals, prize money, allowances, discharge papers, free passage for a family, and pensions; claims to a deceased soldier's estate; and miscellaneous statements and certificates in support of claims.  All enquiries prior to 1860 were sent for destruction in the mid-19th century, with only those thought to still be required for ongoing business surviving.  As sometimes happens in such cases, small survivals occasionally turn up, which is the case with this new acquisition. Here are a few examples of the enquiries it contains. 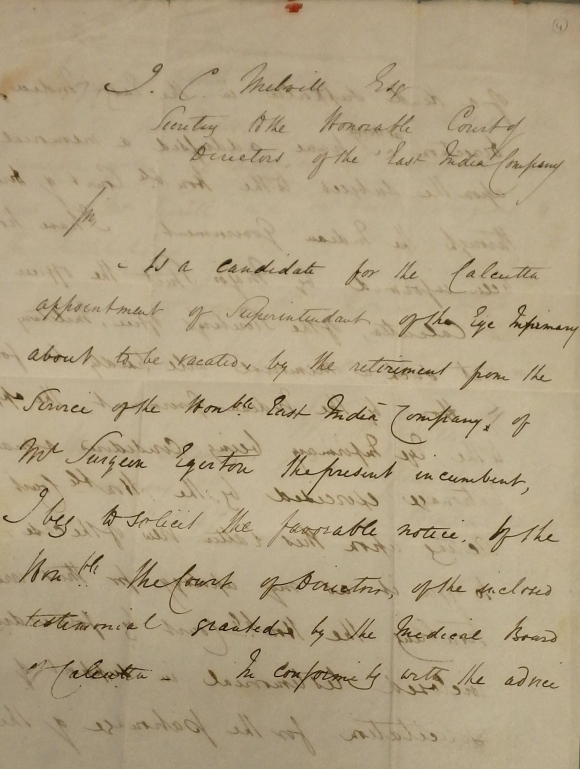 Letter from Dr Green applying for the position of Superintendent of the Calcutta Eye Infirmary Mss Eur F749 f.4

W Green, Civil Assistant Surgeon, Bengal, applied to the East India Company for the position of Superintendent of the Calcutta Eye Infirmary in a letter dated 7 January 1847.  Dr Green had heard that the position was about to become vacant due to the retirement of the then incumbent.  He noted that before leaving England for India in 1830 he had attended the practice of the Eye Infirmary at Moorfields, London. Enquirers writing to the Department often received a reply asking them to fill in an application form.  This was the case with Henry Dean of Liverpool who enquired about the effects of the late William Dean, a Private in the Bombay Fusiliers who died in India on 10 September 1850.  Henry returned the reply with a handwritten note at the bottom stating that he would forward the form to his father Mr John Dean who would answer the questions on it. 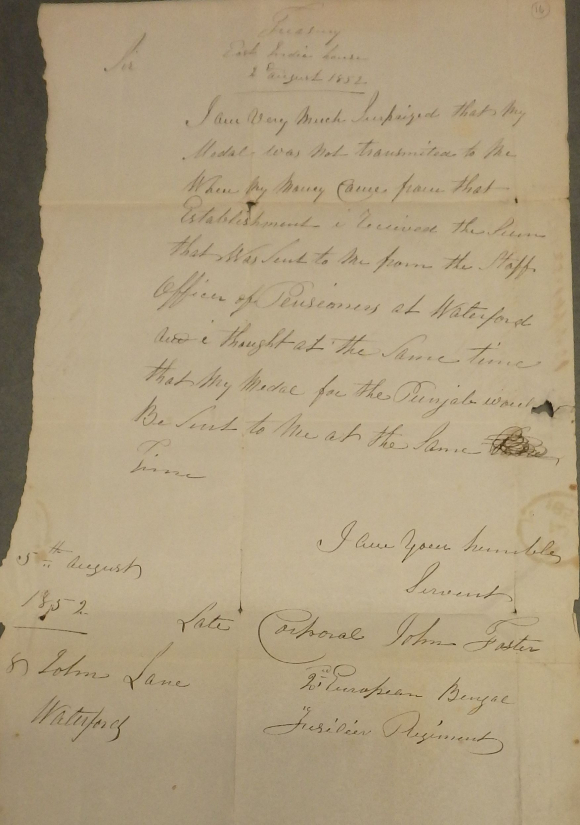 On 2 August 1852, Corporal John Foster of the 2nd European Bengal Fusilier Regiment, wrote expressing his surprise that his medal had not been sent to him.  He had received his money from the Staff Officer of Pensioners at Waterford, and had expected his medal for service in the Punjab to be sent to him at the same time. 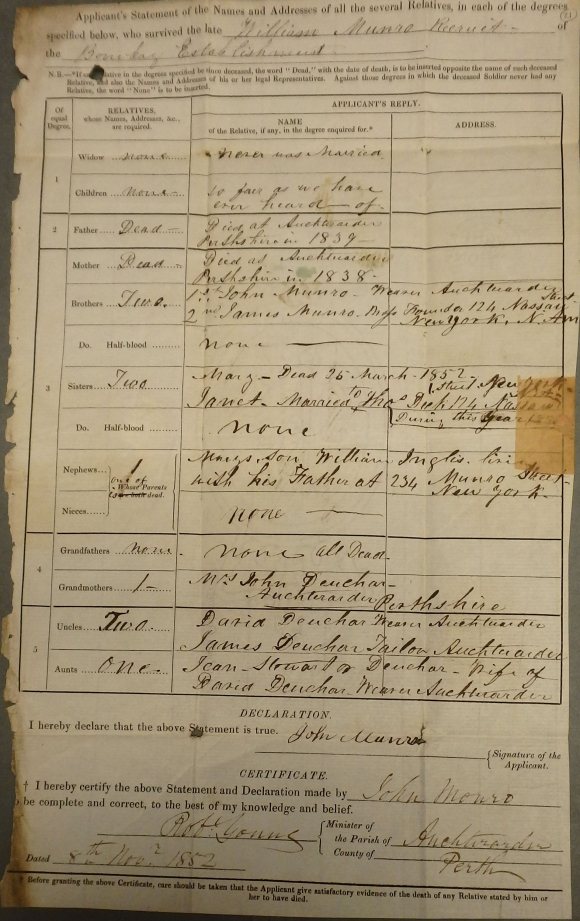 An example of the standard application form which enquirers were asked to complete is that of John Munro, who in November 1852 enquired after the estate of his late brother William, a recruit in the Bombay Establishment.  The Munro family were from Auchterarder in Perthshire, Scotland.  Both parents were dead, and there were two surviving brothers: John still living in Perthshire, and James who was living in New York.  There was also a sister Janet, another sister Mary having died in March 1852.  Mary’s son William Inglis is recorded as living with his father, also in New York.  The form also lists a grandparent, and aunts and uncles still living in Auchterarder.  As was required by the East India Company, the form was signed by the Minister of the Parish, Robert Young.  The need for a parish minister or churchwarden to sign application forms was to discourage speculative applications from persons with no degree of relationship with the deceased from attempting to make fraudulent claims.

Further Reading:
Soldiers' References: letters of enquiry addressed to the East India Company Military Department in London, May 1839-Feb 1853, BL shelfmark: Mss Eur F749. A full list of the contents can be found on the Explore Archives and Manuscripts catalogue.
Soldiers' References for the years 1860 to 1873 are in the India Office Records at IOR/L/MIL/5/362-375. Registers of correspondence for the years 1829 to 1873 are at IOR/Z/L/MIL/5/16-43.
Anthony Farrington, Guide to the records of the India Office Military Department (London 1982).