The King, the Queen, his mistress, and the dead Emperor

When news of the death of ex-Emperor Napoleon on the island of St Helena reached Britain in July 1821, a servant was tasked with communicating the tidings to King George IV, then in residence at Windsor Castle.  He went into the royal presence, bowed, and said ‘Sire, your greatest enemy is dead’.  The King is reported to have replied ‘Is she, by God?’

Identifying his foe as female no doubt seems strange to us, but most contemporaries would have known instantly that he was referring to his wife Caroline of Brunswick, from whom he had long been estranged. 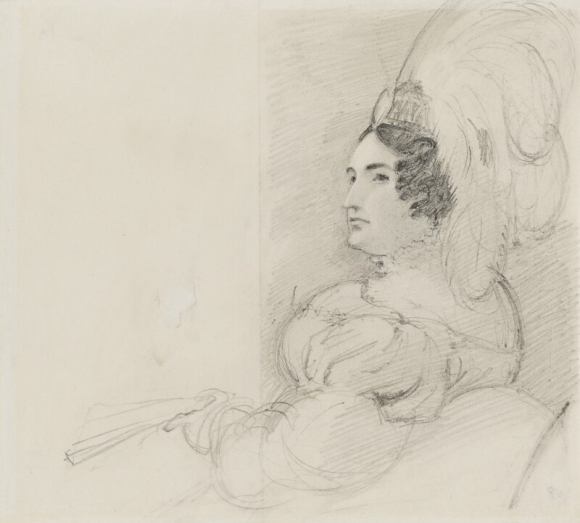 Like that of his parents George III and Queen Charlotte of Mecklenburg-Strelitz, theirs had been an arranged marriage.  However whereas the elder couple famously produced no fewer than fifteen children, the Prince of Wales’s relationship with his bride-to-be was doomed almost from the start.  When he first laid eyes on her in April 1795 just prior to their wedding, he asked for a glass of brandy. (It cannot have helped that he had taken part in an illegal marriage ceremony with the twice-widowed Roman Catholic Maria Fitzherbert almost ten years before.)  Nine months later, when he had performed his husbandly duty of fathering a daughter and heiress, Princess Charlotte, he made it clear that he did not want to live with her mother ever again.

Both parties behaved abominably towards each other.  George appointed his latest mistress Frances Villiers, Countess of Jersey, as Lady of Caroline’s Royal Bedchamber, and did not bother to inform Caroline of Charlotte’s tragic death in childbirth in November 1817.  In 1806 Caroline’s outrageously flirtatious behaviour led the government to set up what became known, not inaccurately, as ‘the Delicate Investigation’.  Inevitably satirists and cartoonists revelled in portraying the warring couple. 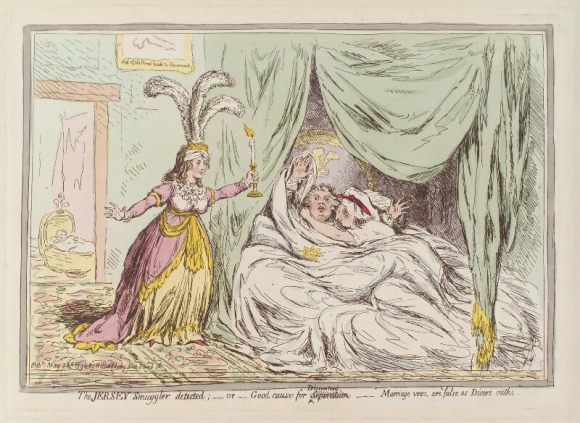 When George III died on 29 January 1820, Caroline became – at least nominally – Queen of England, and returned from self-imposed Italian exile on 5 June. 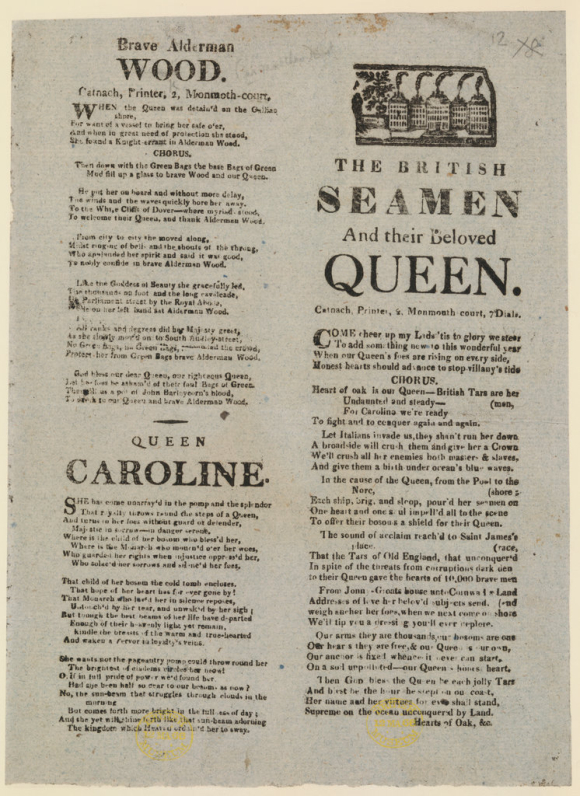 A battle of royal wills took place on the occasion of the coronation on 19 July 1821.  The new King had committed vast expenditure to making the ceremony as magnificent as possible, and had no intention of letting his unloved spouse rain on his parade.  This led to the unseemly spectacle of the Queen hammering on the doors of Westminster Abbey in an unsuccessful attempt to gain admittance.  It was only after she had failed to force her way in through Westminster Hall that she gave up and left, amid the jeers of a watching crowd.

That same night, Caroline fell ill, and died almost three weeks later on 7 August 1821. She may, or may not, have known of Lady Jersey’s death on 25 July.  Two people were killed in the disturbances that broke out in London as her coffin was taken to Harwich, for its onward journey to her final resting place in Brunswick Cathedral.  Her chosen epitaph was ‘the Injured Queen of England’.

Further reading:
‘The Royal Eclipse, or, Delicate facts exhibiting the secret Memoirs of Squire George and his wife’ (London, 1807), shelfmark 1608/3327
‘The Genuine Book: an Enquiry on Delicate Investigation into the conduct of Her Royal Highness the Princess of Wales. (London, 1813), OP-RC/895