In 1868, Captain Newman Burfoot Thoyts of the Bombay Staff Corps published A guide to candidates for admission into the Staff Corps (Native Infantry Branch), being a series of questions and answers in nearly every subject on which they are usually examined.  Under General Orders issued in Bombay on 16 July 1864, officers seeking admission to the Staff Corps in the Native Infantry branch had to undergo ‘an examination of a somewhat searching character, consisting of not less than fifty questions and answers’.  Officers had to demonstrate knowledge of the systems operating in the Native Infantry - the way of investigating and dealing with offences, complaints, and petitions from the men; the manner of keeping rosters for furlough and guard; the pay and accounting system; every piece of equipment used, with the cost and method of carrying them. 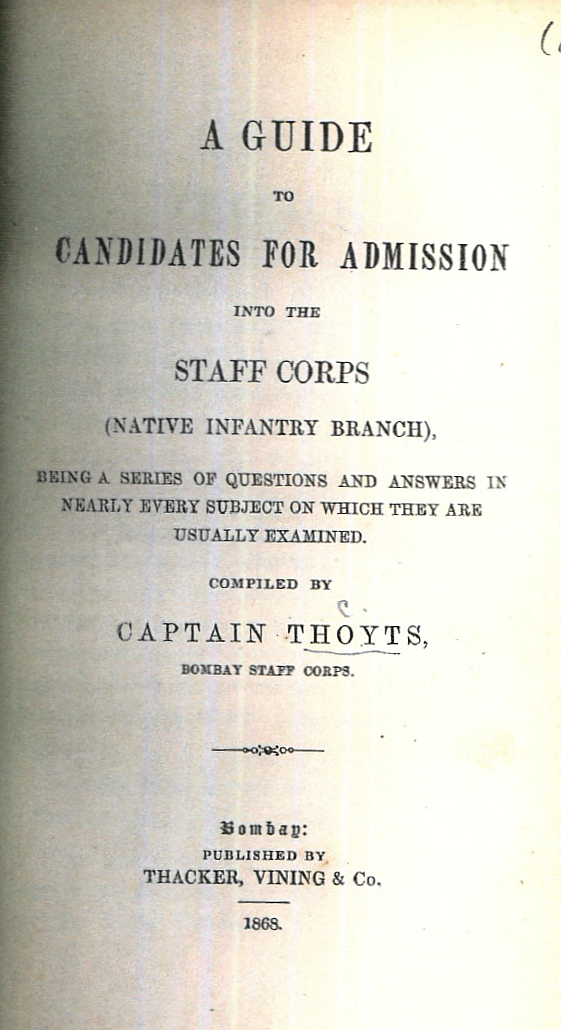 The guide was divided into thirteen sections:
• Articles of war for the Native Army
• Pay and allowances
• Pension and unfits of short service
• Clothing and necessaries, and equipment
• Compensation
• Furlough
• Transports and foreign service, camp equipage, carriage and conveyance by rail
• Hutting rules
• Medals
• Schools
• Ammunition
• Arms and accoutrements
• Miscellaneous

The section for clothing and equipment makes interesting reading.  Native officers and other ranks were supplied with a tunic and a pair of serge trousers every two years.  Once worn for a year, these garments became the property of the soldier.  Every four years havildars and fife majors received a worsted sash, and drum majors a silk sash.  Extra equipment was issued when troops were embarking on foreign service – two flannel banians [jackets or shirts]; two pairs of flannel trousers; one pair of boots; one country blanket; one canteen; one haversack.  These became the property of the soldier once his foreign service was completed.  Knee caps were provided.  Greatcoats reaching six inches below the knee were supplied at the men’s own expense and had to last six years before they were renewed. 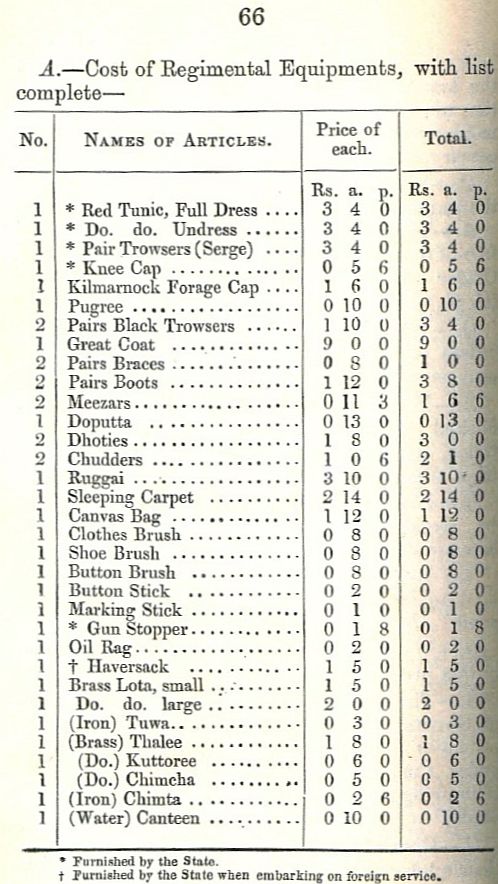 List of regimental equipment and the cost of each item

Soldiers were issued with a ‘set of necessaries’ or equipment: clothing, footwear, brushes, cooking utensils, and bedding. Deductions were made from pay for replacements.

Indents for clothing were submitted on 1 April each year.  Size rolls were drawn up using measurements taken with great care.  Allowance was made for young growing men.  Clothing was seldom issued until twelve months after the rolls were prepared so failure to allow for growth entailed wasted expense.

Very precise instructions were given to ensure the quality of clothes issued. When packages of clothing were received, they had to be checked immediately to ensure they had not been tampered with.  If clothing was condemned by the Regimental Committee, it was checked again by a Station Committee of officers unconnected with that regiment.  Each article was examined separately and the Committees had to give a precise reason for rejection.

The clothing of native soldiers who died, deserted or were taken as prisoners of war was returned to the stores for re-issue.  Reasonable attention was to be paid to ‘the distinctions of family, tribe etc’, for example ’the tunic of a Purwarree or Moochee should not be issued to a Mahomedan or Purdasee’.  Invalids struck off the strength were allowed to take their clothing with them.

Further reading:
Captain Thoyts, A guide to candidates for admission into the Staff Corps (Native Infantry Branch), being a series of questions and answers in nearly every subject on which they are usually examined (Bombay, 1868) – British Library Tr. 448(b)