Bury me at sea inside my piano

During a voyage to India in 1804-05, John Linley Cantelo amended his will to give instructions for burial at sea in his piano if he should die before he reached port.

John Linley Cantelo came from a musical family of Bath.  He served as Purser on the East India Company ship Lascelles before becoming a free mariner in India and then a Lieutenant in the Company’s Bengal Marine.  In June 1804 he married Eleanor Allen in Bath.  Three months later he embarked on East Indiaman Travers to return to Calcutta leaving Eleanor behind, pregnant with their daughter Julia Wilhelmina.  With him was an expensive piano he had commissioned from John Broadwood and Sons – square with a frame and shelf made particularly strong, able to be played at sea.

On 26 July 1804 Cantelo wrote a will leaving his property to his wife Eleanor who had moved to be near to her family in Haverfordwest.  He added a codicil whilst at sea in the Travers on 12 February 1805. 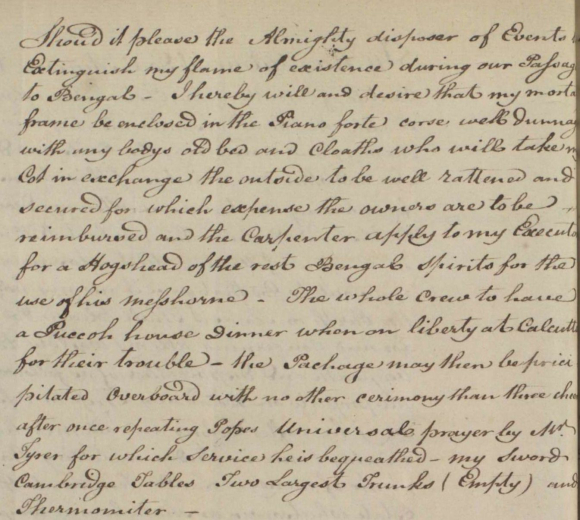 Extract from will of John Linley Cantelo giving instructions for burial at sea in his piano IOR/L/AG/34/29/17 no.67

‘Should it please the Almighty disposer of Events to Extinguish my flame of existence during our Passage to Bengal – I hereby will and desire that my mortal frame be enclosed in the Piano forte corse [case] well dunnaged with any bodys old bed and Cloaths who will take my Cot in exchange the outside to be well rattened and secured for which expense the owners are to be reimbursed and the Carpenter apply to my Executor for a Hogshead of the rest [sic] Bengal Spirits for the use of his messhorne.  The whole Crew to have a Puccoh house dinner when on liberty at Calcutta for their trouble – the Package may then be pricipitated Overboard with no other cerimony than three cheers after once repeating Popes Universal prayer by Mr Tyrer for which Service he is bequeathed my Sword Cambridge Tables Two Largest Trunks (Empty) and Thermomiter.’

Cantelo added another codicil in July 1805 after he had arrived in India: ‘By Devine Providence I am now at Calcutta and seeing my acquaintance dying Cheerly I revoke the last Codicil its Purpose being done away’.  He then gave specific instructions about his burial in the cemetery at Calcutta: ‘I have looked out a snug Pucha birth at the end of the burying Ground walk turning to the left as you enter the Porch past Mr Edmonstone & Impeys I want nothing but a square tomb over English fashion with J. L. Cantelo only the least Expense possible so as not to be mean’.

Cantelo wrote a final codicil on 28 July 1805. This included a bequest to Lascelles, his son by an Indian woman named Catharina, and the gift of his piano and two books for it to Miss Bella McArthur, daughter of his executor James Alexander McArthur.

With thanks to Barry Cantelo for alerting us to this story and providing information.

We are stumped by the word ‘messhorne’!   Can anyone help us?  Is it a transcription error by the clerk copying Cantelo’s will?  Suggestions please to ior@bl.uk or Twitter @UntoldLives.