On 30 May 1815 the East India Company Court of Directors considered a request from the Prince Regent that Peniston George Lamb be appointed to a writership in Bengal.  It was resolved that His Royal Highness should be given the nomination of a student for East India College, Haileybury,  with a view to appointment as a writer on the Bengal establishment. 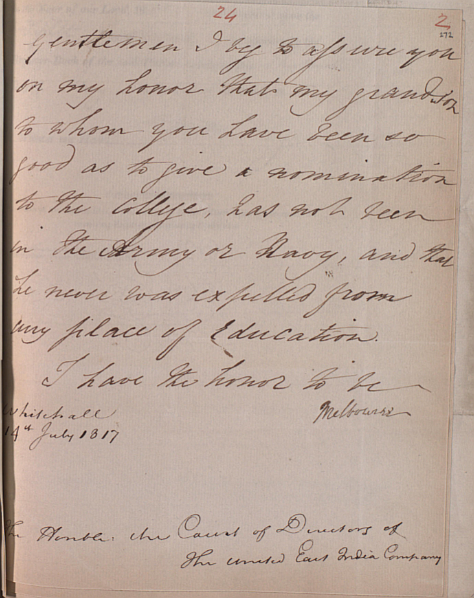 Peniston Lamb submitted his application papers to the Company in July 1815.  These include documents of support from Viscount Melbourne at Whitehall who states that Peniston Lamb is his grandson and ward.  A certificate from St George Hanover Square records that Peniston was born on 30 April 1801 and baptised on 8 August, the son of Peniston and Margaretta Lamb.  His father had died.  Peniston junior was educated at a school based in Hertford Castle, not far from the family seat at Brocket Hall.

However the story of Peniston Lamb is more complicated than might at first seem.

The identity of his mother Margaretta is a mystery.  His father Peniston is not known to have married, although he had a long-term affair with Mrs Sophia Musters whose name was also linked in society gossip to Prince George.  Sick with consumption and anticipating his end, Peniston Lamb wrote requests to his father Viscount Melbourne and brother William which were discovered in his desk after his death in January 1805.  The first dated June 1803 included this wish: ‘I now recommend to my dear Father’s care and protection the little Boy which is at Mrs Cottys but only wish him to be brought up as a Millner’s Son ought to be’.  In October 1804, Peniston instructed William that any residue from his estate should go to this child.  It appears from the writer’s petition that Viscount Melbourne acknowledged the boy as his grandson and gave him an education suitable for a career in the East India Company. 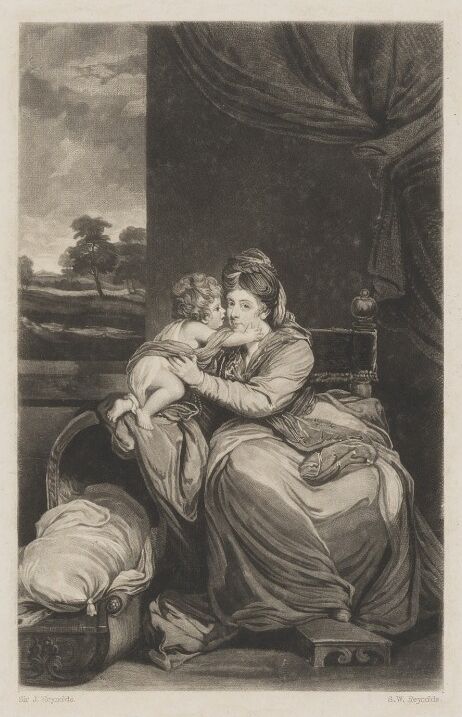 The Lambs had close ties to the Prince Regent and there are many instances of his patronage being granted to the family.  Viscount Melbourne and his wife Elizabeth both had extra-marital relationships.  Elizabeth had six children who survived infancy but the only one believed to have been fathered without doubt by her husband was her eldest son Peniston born in 1770.  She began a well-known affair with the Prince in 1783 and he was said to be the father of her fourth son George.

Peniston Lamb spent four terms at East India College and was a very proficient student.  He won prizes for classics, French, and law. When he left in 1819, he was placed in the first class category and ranked third amongst the students destined for a career in Bengal.  The sureties guaranteeing his good behaviour in India were Hon George Lamb of Whitehall Yard, barrister (his uncle and the possible son of the Prince Regent,) and Charles Cookney of Holborn, solicitor.  George Lamb also gave security that the appointment had not been purchased.

Having arrived in India in July 1820, Peniston Lamb worked for the Board of Revenue and then the Secret and Political Department.  Sadly his career was very short as he died in Singapore on 20 July 1824.