Indian soldiers protest about the loss of extra pay

In December 1841 Indian private soldiers of the Madras Army stationed at Asirgarh and Secunderabad refused to receive their monthly pay.  The sepoys were protesting at the removal of their allowance, or batta, which had been paid to troops stationed at a distance from their home Presidency to cover extra expenditure.  They claimed that the amount of pay without batta was insufficient to maintain their families.

European officers and Indian officers and NCOs tried in vain to persuade the men to accept their pay without batta.  They warned that refusal would be regarded as mutiny.  At Secunderabad nearly 300 privates of the 32nd Regiment of Native Infantry persisted with their protest but obeyed when told to ground their arms.  They were then taken prisoner by a party of Europeans.  A similar situation developed with the 48th Regiment of Native Infantry. 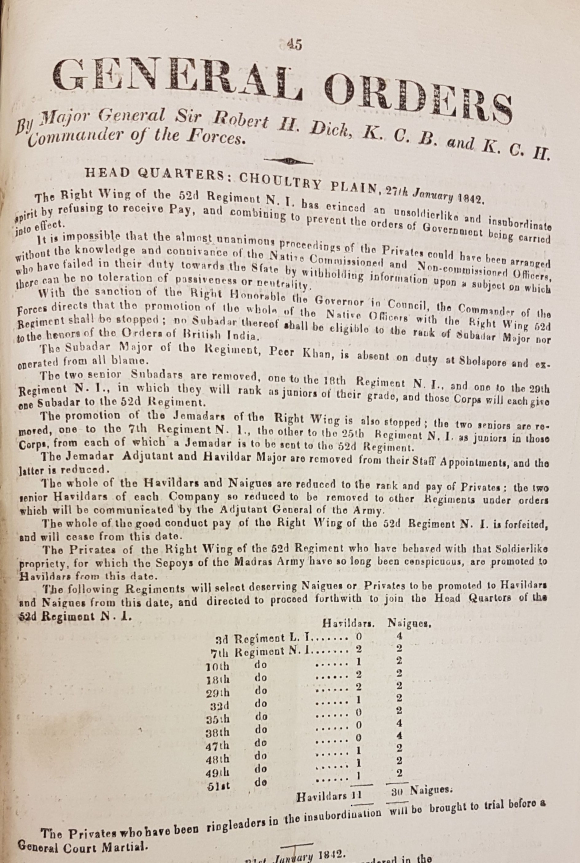 The most prominent men in the protest were selected for trial by Court Martial.  Good conduct pay was forfeited by those who had taken part but an amnesty was granted to the main body of offenders.  However native officers and NCOs were punished for having failed in their duty, either through ‘ignorance of any plan of insubordination so settled and matured’, or from having allowed it to proceed because they also stood to lose out from the removal of batta.  There were demotions and blocks on future promotions. 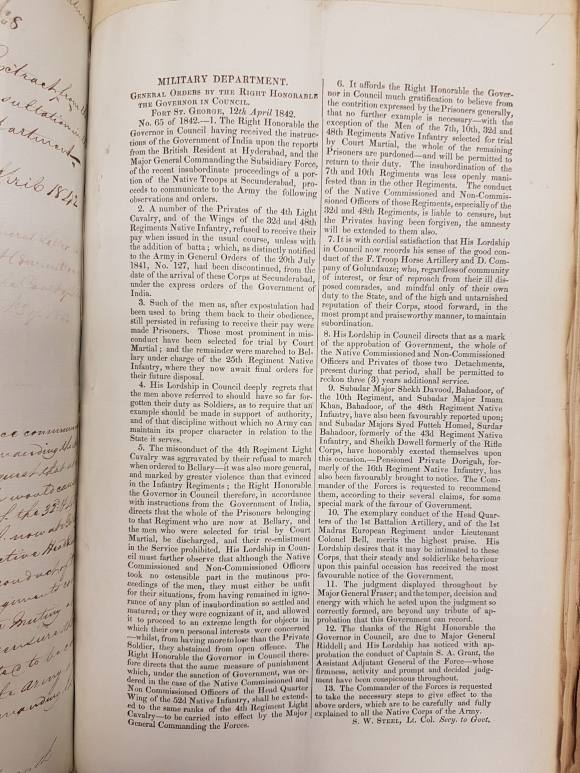 General James Stuart Fraser, the Resident in Hyderabad, was sympathetic to the soldiers’ complaint and promised to recommend an enquiry into what they alleged about the cost of living.  Fraser collected data which he hoped would enable the government to judge whether the soldiers were justified in protesting.  Was pay without batta sufficient to maintain them and their families?

An estimate of monthly expenses was drawn up for food and clothing for three categories of Indian soldiers at Secunderabad living with a wife and two children: a ’Man of the Talinga or Malabar Caste’; a ‘Musselman’; and a ‘Native of Bengal’.  Costs were given for rice; inferior grain; meat; ‘dholl’; salt; lamp oil; ghee; firewood; betel nut and tobacco; ‘masalah’; vegetables; ‘goodaccoo’; cholum flour; and clothing. 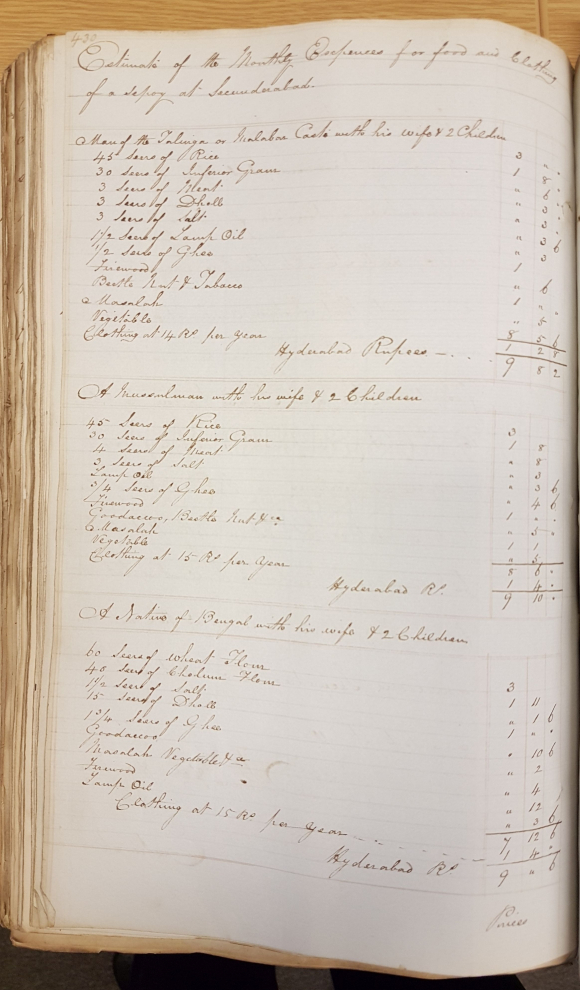 An estimate of monthly expenses for food and clothing for Indian soldiers at Secunderabad  - British Library IOR/F/4/1952/84995 p.430

Other East India Company officials also recorded sympathy for the Indian soldiers.  John Bird of the Council of Fort St George expressed his regret that it had been found impracticable to issue pardons to the offenders, instead dismissing all the prisoners of the 4th Regiment.  He would have preferred the adoption of Fraser’s recommendation to transfer the men to other regiments. Bird also thought the treatment of the officers was too harsh and that innocent men would be punished.

Sir James Law Lushington, Chairman of the Court of Directors in London, also believed the punishments to be misguided.  The Court wrote to Madras in August 1842 stating that the directors would approve if men of previous good character could safely be shown leniency.

Lord Elphinstone, Governor of Madras, wrote of the bond of union between the sepoys and the European officers being cast aside in recent years.  At the same time as batta was being taken away from native troops at stations where it had long been in place, it was given to European officers based away from their home Presidency.  Elphinstone said the chasm between the officers and the native soldiers had widened.