Archives on the environment appear in unexpected places.

Under the Permanent Settlement of 1793, India’s British rulers fixed the taxes which land-holders in certain regions paid on their land.  But land itself was not permanent.  Across the Sub-continent, rivers and their tributaries were constantly changing the landscape.   They flooded, dried up, and changed course.  They submerged some areas and exposed others; they created bogs, swamps and marshes which were neither land nor water.  Little wonder that colonial officials, intent on extracting revenue from the land, described India’s rivers variously as ‘mischievous’, ‘unruly’ or ‘evil’.

If a change in the river created more land on your land, should you pay more tax?  This was the question facing the Maharajah Jagadindra Nath Roy Bahadoor in 1892, after the great Brahmaputra had changed course and new land had emerged on his estates in Bengal.  No, said the Maharajah: the land, although under water before, had always been there.  Yes, said the government: new land above water was just that - new.

The Maharajah took the government to court.  By 1902 the case had escalated through the High Court of Bengal to the final court of appeal, the Judicial Committee of the Privy Council in London.  Archives about the case survive in the records of the Legal Adviser to the India Office, who acted for the Secretary of State for India.  The Committee found in the government’s favour: you can read the judgment here.

On points of law, the case attracted a certain interest; it is summarised in Indian Appeals.  But what draws the attention now are the maps prepared for the earlier hearings.  Twenty maps show the disputed land at different times in the 19th century.  Some are prepared from old survey maps; others are composites, telling the story on a single sheet like this example below.  It shows the river’s course in 1892 [A] superimposed on its course as measured out in 1852 [B].  The new land is marked out in yellow, with patches of jungle and sand drawn in. 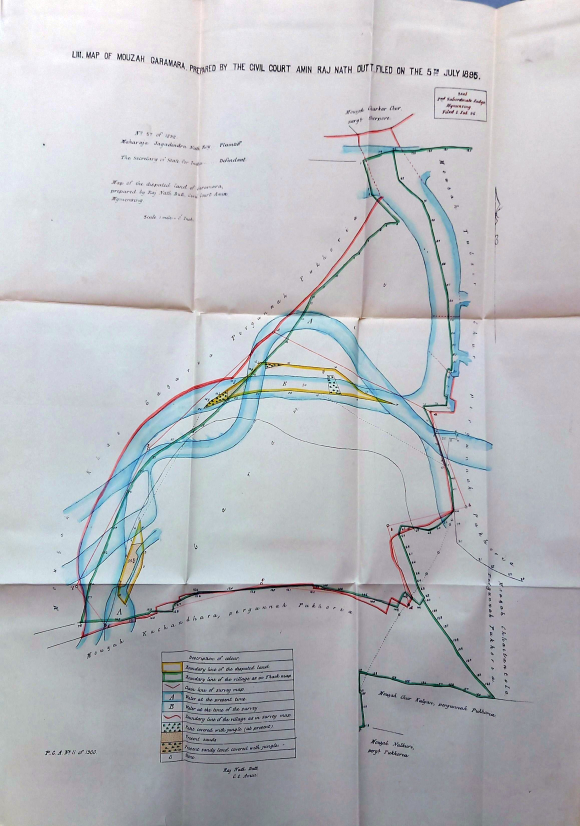 In Bengal the Maharajah had also called witnesses, and their recollections fill out the scene.  'The lands were washed away by the river in eight or nine years.  The river remained current on the spots for a year or two, then receded towards the north.'  ' have seen jute, aus [rice], paddy and mustard being grown upon the land.'

We are currently cataloguing the Legal Adviser’s records and have found other lawsuits arising from changes in river courses.  This is a map from an Appeal of 1928 (for parties and judgment see here). 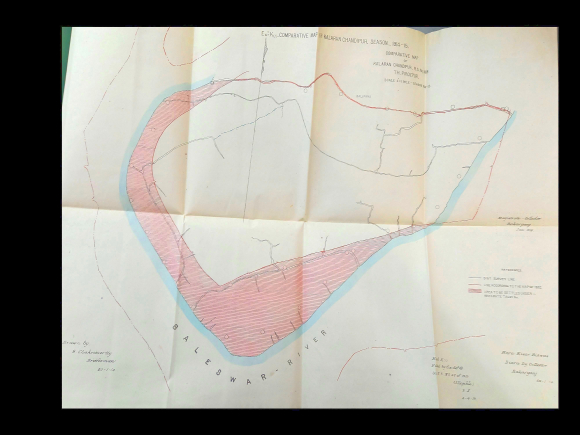 These maps and testimonies must have given a diverting glimpse of the natural world to the Privy Councillors while they sat in their Council chamber at no 9 Downing Street.  Today, the documents catch the eye again, especially for anyone interested in the historical river-scape of the Bengal delta.

Posted by India Office Records at 09:00:00 in Conflict , Science and environment , South Asia