Diary of a Lumber Jill

‘Lumber Jill’ was the name given to women who worked in the oft-forgotten Women’s Timber Corps (WTC) during the Second World War, who have only begun to receive proper recognition for their service the past two decades. Initially a sub-division of the Women’s Land Army (WLA), members volunteered – or were conscripted into – working in forestry, carrying out duties previously done by men, such as sawing, felling, measuring, loading cargo, and driving tractors. This was often heavy manual labour, and could also be dangerous, but many women enjoyed it. Vera Lloyd compiled her experiences of the WTC into a diary in 1953, which found its way to our Modern Archives collections. 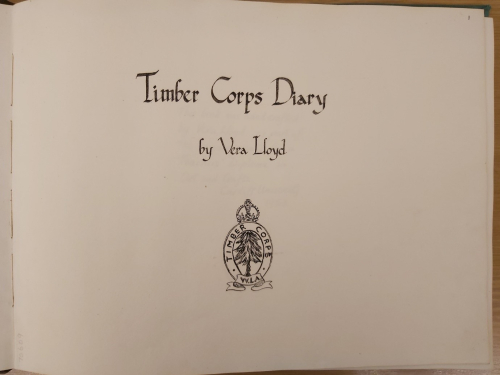 Vera began her journey in Gloucestershire, with working hours typically starting at 7.45am in the morning until 6pm in the evening, with a half-day on Saturdays. During summer, work was daily and often never ending. It was not all hard labour though, early on in the service she rode her first pony, saw another give birth in the wild, and even had the time to fill in the head-sawyer’s cap with sawdust.

After nine months on the job, aged only 23, she was sent to Jacobstowe to lead a group of men at a sawmill – and here encountered some resistance to her leadership. A man named Fred was slacking on the job, often arriving late in the morning. She reflects, ‘It was, I suppose, [a] rather excusable reaction against being under a mere woman, but after a fortnight I decided to act’. Despite never sawing herself before, she worked for two hours before Fred arrived, putting in a significant amount of work. He ‘then eyed me with approval. “Shake” he said, holding out his hand’. She had little trouble from him thereafter. 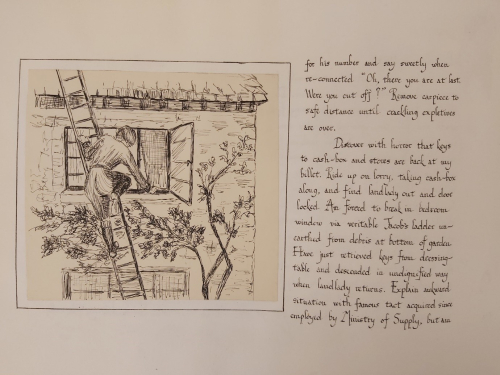 Diary entry with a sketch showing Vera entering the upstairs window of the house via a ladder, Add MS 70609

In 1943 she was relocated further south-west to Baconnoc, to become sub-foreman for 80 workers, a significant increase of people under her charge. She writes a relatable experience of forgetting her keys and having to break into her house. While doing so her landlady returned, at which point she explained the ‘awkward situation with famous tact acquired since employed by Ministry of Supply, but am bowled over by information now imparted that key was under mat.’ We’ve all been there.

Of course, forestry work was perilous too. Early on, she writes that when walking through the forest a tree began to fall, which she dodged ‘with expert skill’. Worse, a few years later a boy came into her office bleeding over the floor. She explains how he had ‘placed [his] thumb too near [the] circular saw and is not the lad he was by quite a large bite’.

After the War ended she stayed in the Corps to help rebuild, but disliked the office work she was assigned, longing for the manual labour and companionship in the fields. So she ‘rejoined the ranks of civilians, the richer by over five years of happy comradeship with the people of the West Country’. Vera received two recognitions of her service, which she kept in the diary. 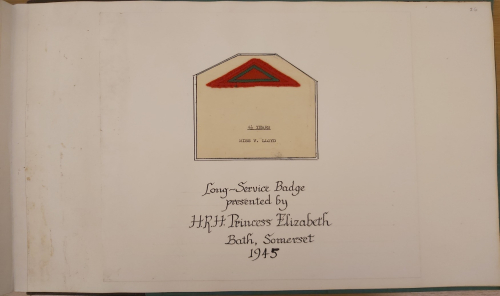 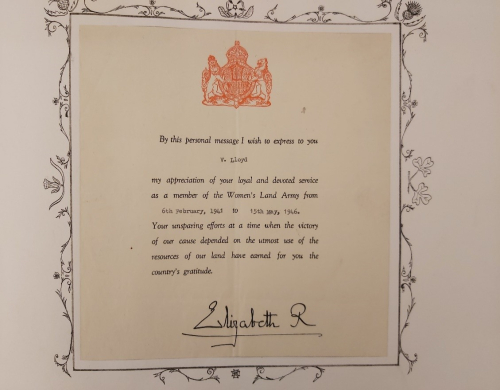 Doctoral researcher at the Open University. His CHASE-funded research explores sexual violence between men in the late 18th and 19th centuries.

Vera Lloyd’s diary is part of the Life on the Home Front display in the British Library’s Treasures Gallery from 14 September until 11 December 2021. More information can be found at https://www.bl.uk/events/life-on-the-home-front.

Add MS 70609 - Vera Lloyd: 'Timber Corps Diary', a calligraphically written account of episodes from the author's service in the forestry section of the Women's Land Army during World War II (6 Feb. 1941-15 May 1946).