We were delighted recently to receive a donation of papers belonging to George Fish, a British private soldier serving in the Bombay Army.  These documents complement official East India Company records held at the British Library and give us a more rounded understanding of Fish’s life.

George Fish was born on 22 December 1807 at Stoke Damerel in Devon, the son of John and Flora Fish. The family subsequently moved to John’s home area around Bolton in Lancashire.  In September 1827 George married Elizabeth Gaskell.  Their first child Flora died in infancy in May 1829.  Her baptism record states that George was a collier.  A second daughter Mary was baptised on 25 July 1830.  George is now described as a soldier.

On 11 June 1830 George had enlisted at Manchester as a gunner in the Bombay Artillery for unlimited service.  The East India Company recruitment records give his age as 20 years 1 month and provide this description: long visage, dark brown hair, grey eyes, fresh complexion, height 5 ft 7 ins, and single.  He sailed for Bombay in the Buckinghamshire in January 1831 without his wife and daughter. 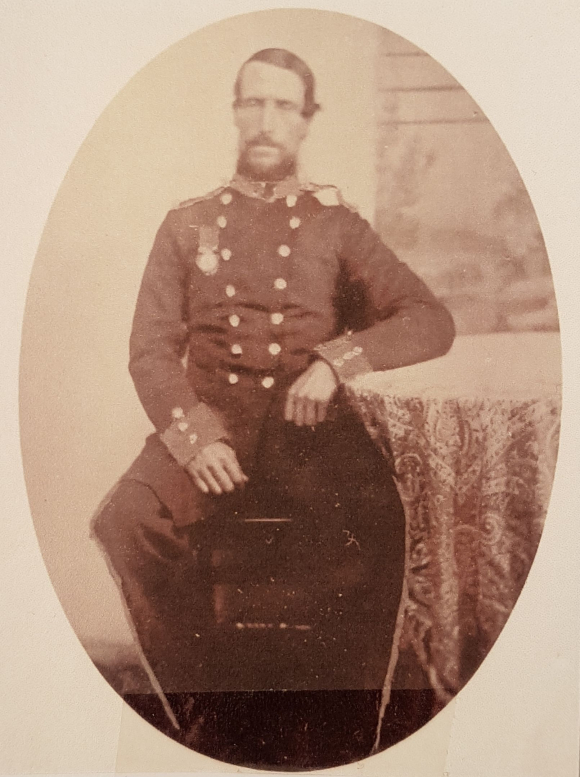 We can pick up the next stage in George’s story from his side of the correspondence with his family in Tyldsley.  The earliest letter in the collection is dated September 1831 at Admednagar.  The voyage from England took 3½ months.  He is in good health and says that the soldiers are provided with the best of rations and a daily dram of liquor (but George subsequently gave up drinking).  Although well-liked by all his comrades, he would be happier if his dear wife was with him.  He comments that ‘the Natives of this Contrey are all Verey Black but verey Rich and som of theme Makes houer Soulders good Wifes’. 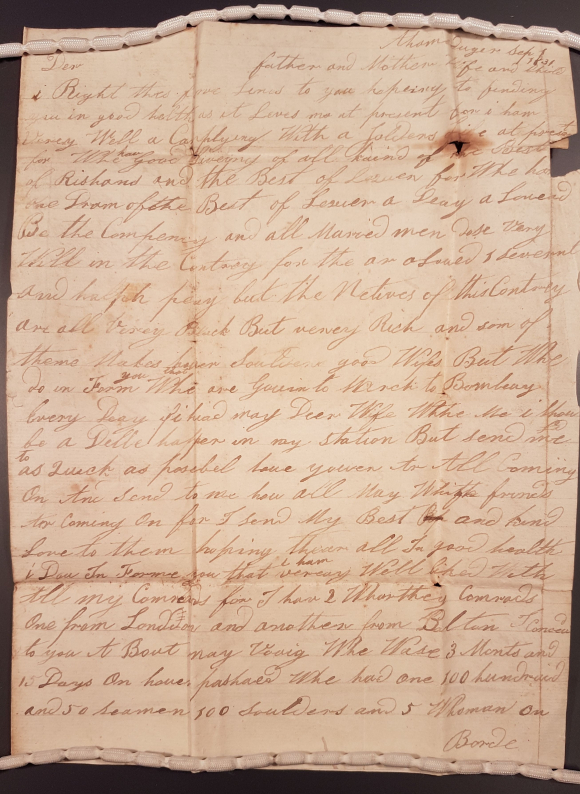 The next letter dated 1832 says that George is content with his situation but wishes Elizabeth and Mary were with him as they would want for nothing.  A woman came to her husband in India by asking her parish overseers to apply to ‘Indey House’ in London.  Young ladies coming to India would bring Elizabeth as a servant, so perhaps Mary could be left with his father.

In June 1833 George reports that he has spent four months in hospital with a pain in his side but is now recovered.  He is glad that his parents are caring from Mary whilst Elizabeth works in the coal pits.  George thinks that he will see them again soon.

Writing from Bombay in September 1837 George speaks of being hospitalised with a severe fever which has affected large numbers of soldiers.  He can send letters home every month now and hopes that his father will write more often.  Mary is thanked for the few lines she sent, which made the tears run down his face.  George promises to make amends for all his past failings and asks for a lock of Mary’s hair as a keepsake and comfort, enclosing one of his 'grey' curls for her.

The last letter in the collection was written to his parents and daughter from Hyderabad in September 1845 and talks of preparing for war against the Punjabis.

We shall continue George’s story in our next post.