We're continuing our story about George Fish.  Two complementary sets of private and official letters spanning 30 years provide a glimpse into the life of one family separated between two continents.

On 5 April 1841 Gunner George Fish married Eliza Folkers at Bombay.  Eliza was the daughter of Albert Folkers, an East India Company Army pensioner who died in 1835, and his wife Mary. 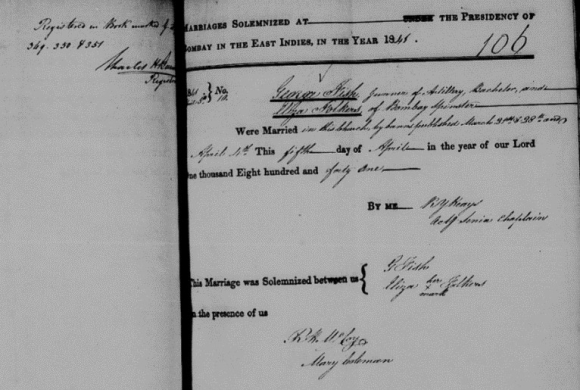 George and Eliza had a son Philip Charles born on 29 November 1849.  I have been unable to find any other records about Philip.

During the 1840s George transferred to the Ordnance Department and served as Laboratory Man and then Store and Park Corporal, rising to the rank of Sub Conductor.  He died on 18 September 1850.  His widow Eliza married Daniel Sullivan, a Post Office clerk, on 14 October 1850 at Karachi.  She died in 1854.

In June 1860, George’s daughter Mary applied to the India Office in London for the value of her late father’s effects as his only legitimate child.  Mary was a silk weaver living at Pits Oth Moor, Patricroft, near Manchester, the wife of James Lomas, a striker for a smith.  It appears that someone wrote the letter on her behalf as she marked a cross on her marriage register entry and  on an India Office form.  She enclosed the first letter George had sent to his father and mother in 1830 in which he complained about his daughter being baptised as Mary because he had intended her to be named Jane after his grandmother.  Mary had fifteen more letters which she could share.  The last letter received by the family was dated 7 January 1848 in Karachi.  She said that if her father had married in India, he had committed bigamy since her mother Elizabeth was still alive.

The War Office forwarded to the India Office in February 1861 an application from Mary for George’s effects which she had sent to the Duke of Cambridge.   There is an India Office annotation that the estate was valued at Rupees 80 – 3 in the Bombay Government Gazette of 1851.

Amount of estate of George Fish reported in the Bombay Government Gazette of 1851 p. 1209

Mary wrote again to the India Office in April 1861, reporting that her mother had drawn the sum of £2 14s 7d from the Bank of England in Manchester.  She asked when the balance of £5 9s 2d would be paid.   She hoped that her parents’ marriage certificate and her father’s letters, which she had sent as evidence for her claim, would be returned to her as soon as possible. 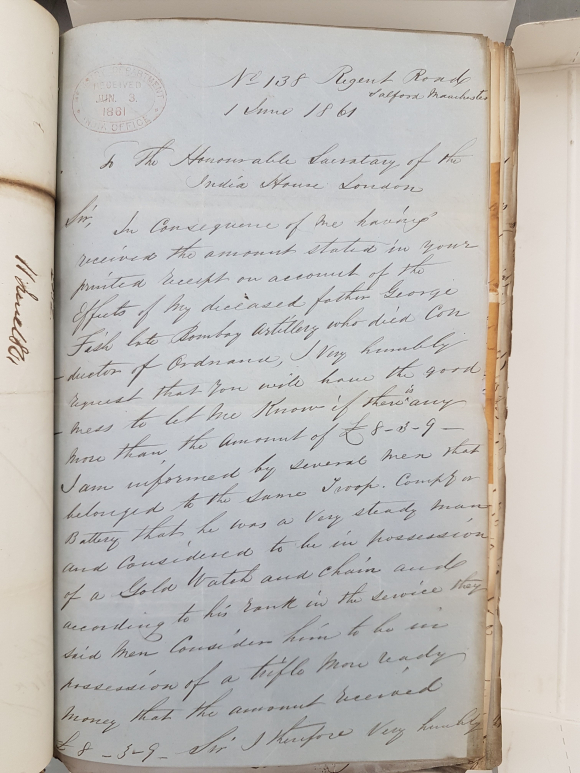 In June 1861 Mary asked if anything more was owed above the amount of £8 3s 9d now received.  Several men who had served with her father had told her that George was a very steady man and thought to be in possession of a gold watch and chain, with more ready money than the amount paid.  The Military Department informed her that nothing was owed beyond the sum already given to her mother. 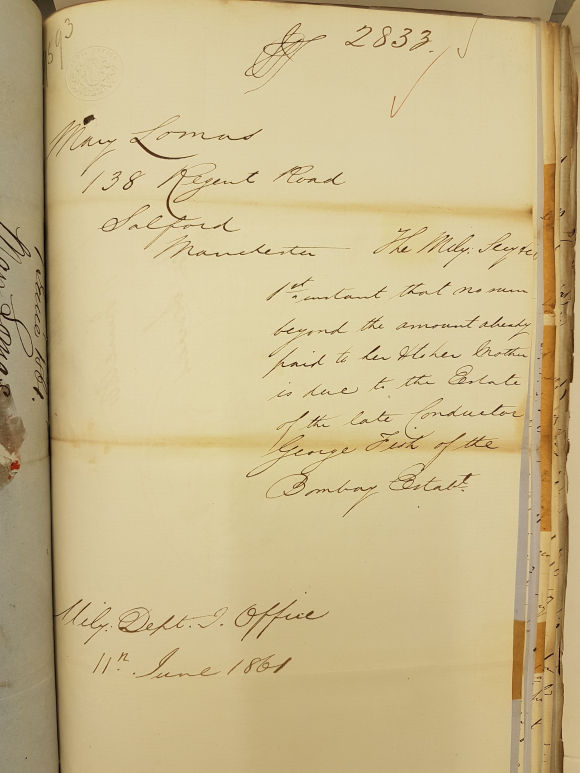 In September 1861 Mary questioned whether her father was entitled to any prize money, batta, or medals for his war service. The chain of correspondence between Mary and the India Office appears to end here.