The bombing of Britain

Air Raids were a consistent source of terror and dread for Britons during the Second World War (1939-1945).  The first warning siren sounded only 22 minutes after war had been declared; it was a false alarm, with bombing not beginning in earnest until the following September.  The most sustained bombing campaign – The Blitz – lasted until May 1941, and claimed the lives of around 43,000 people.  Bombing continued after this period, across various regions of the United Kingdom.  Some people wrote about their experiences.

Diaries are an especially good source of information on the difficulties of living in fear and anticipation of air raids.  Those of Judith Blunt-Lytton (Lady Wentworth) are particularly detailed about her life in Sussex.  Perhaps the most evocative entry is from 29 November 1940, where she wrote how she had to jump in some wet bushes after the warning sounded, and that explosions in nearby Horsham ‘looked like an aurora borealis’.

Afsa Horner described how bombing evolved over the years.  She writes in her memoirs that she preferred V2 rockets – which often did not trigger warning sirens – as you had no time to wonder about getting to safety.  Although deadlier, they were less frightening as you had no time to be scared. 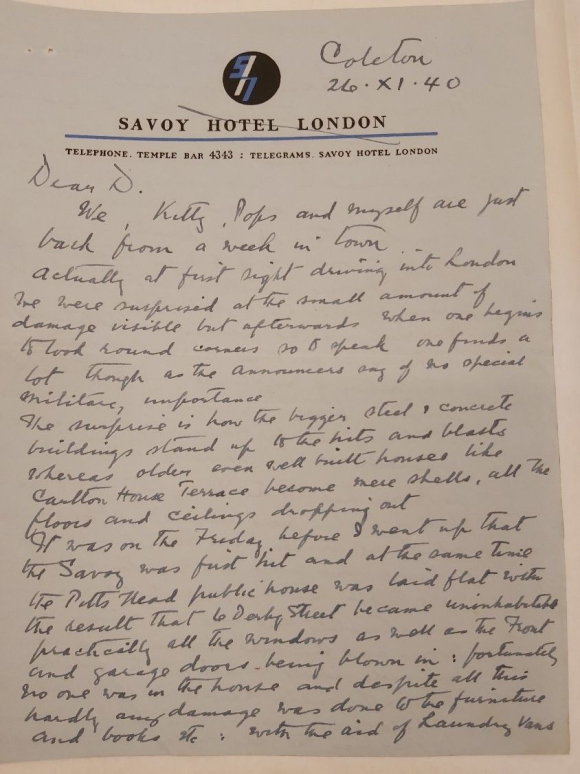 Staying in a hotel, especially in London, was extremely risky.  Nevertheless, business continued despite the persistence of air raids.  Evelyn B. Graham-Stamper was in bed with her husband at the Hans Crescent Hotel in September 1941, ‘when, suddenly, the most blinding flash and every-thing seemed to fall around us’.  She continues, ‘We both knew the end had come and clung to each other waiting for the coup de grace which was to finish us off.’  However, they survived and managed to make their way to safety.  Similar experiences did not hurt the trade of one grand hotel, The Savoy.  Owner Rupert D’Oyly told his wife in a letter from September 1940 that after a series of bombs falling, causing damage on multiple floors, ‘in fact the 200 or so people living in the hotel increased the next day’.  Life went on. 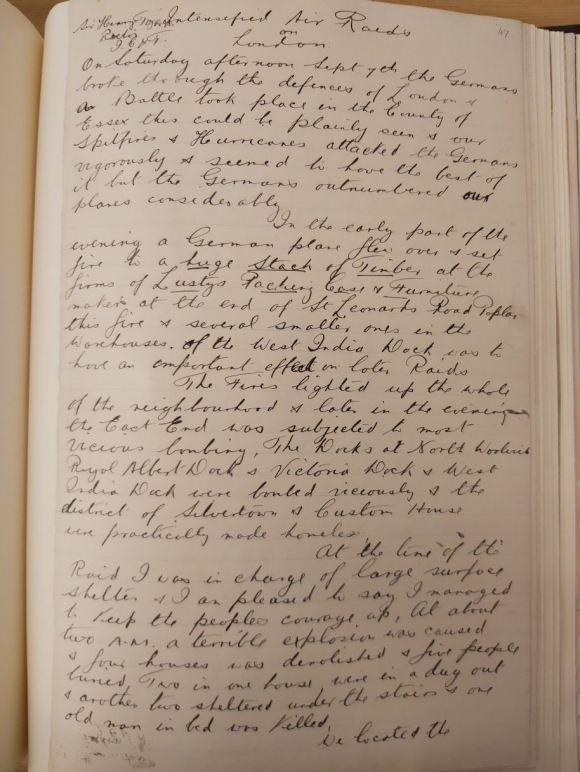 A persistent theme throughout these narratives is morale.   The Chief Air Raid Warden of Poplar emphasised that people are ‘wonderful considering what had happened’: multiple streets destroyed with numerous deaths.  On the other hand, Julian Symonds described London life as ‘depressing’.  Either way, the experience of huddling in shelters together was the ‘new spirit’ of the country, as editor of Poetry London Meary James Thurairajah Tambimuttu wrote.

Air Raids were terrifying part of life on the Home Front, which continued throughout the War.  However, what comes through in most of these narratives is a sense of positivity, that life must continue as normal as possible.  The accounts described here are only a small sample of those which survive in our collections.