The Rational Dress Society was founded in 1881 in London.  The aim of the Society was ‘to promote the adoption, according to individual taste and convenience, of a style of dress based upon considerations of health, comfort, and beauty, and to deprecate constant changes of fashion, which cannot be recommended on any of these grounds’.  The Society promoted its work through drawing room meetings, advertisements, pamphlets, leaflets, and by issuing clothing patterns approved by the Committee.  There was an annual membership subscription of 2s 6d. 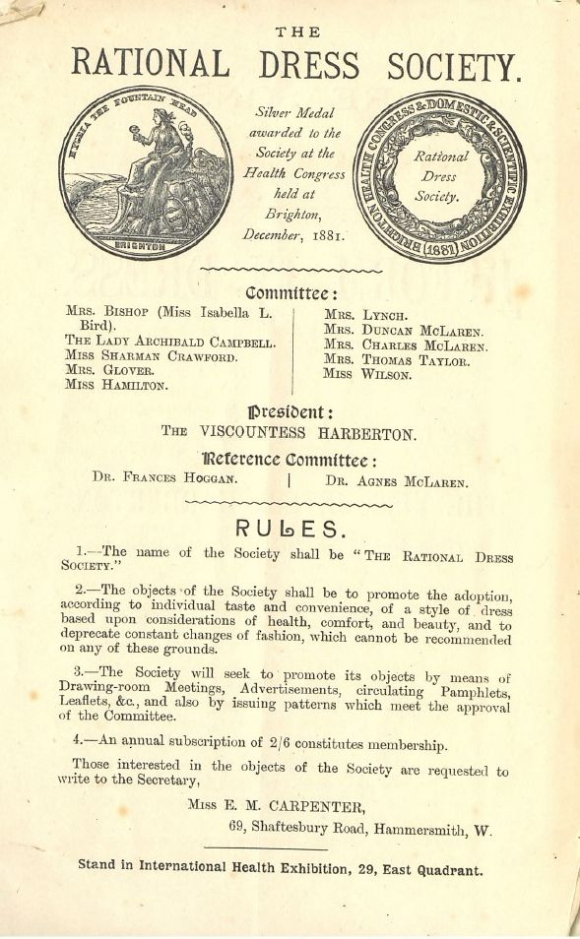 In 1884 Viscountess Harberton, President of the Rational Dress Society, published a pamphlet entitled Reasons for reform in dress.  She contended that anything truly beautiful was in accord with nature and questioned how far current women’s clothing conformed to that rule.  A woman’s waist was naturally broad and flat, but dresses were designed to set off a round waist, sloping in like the letter V from under the arms. 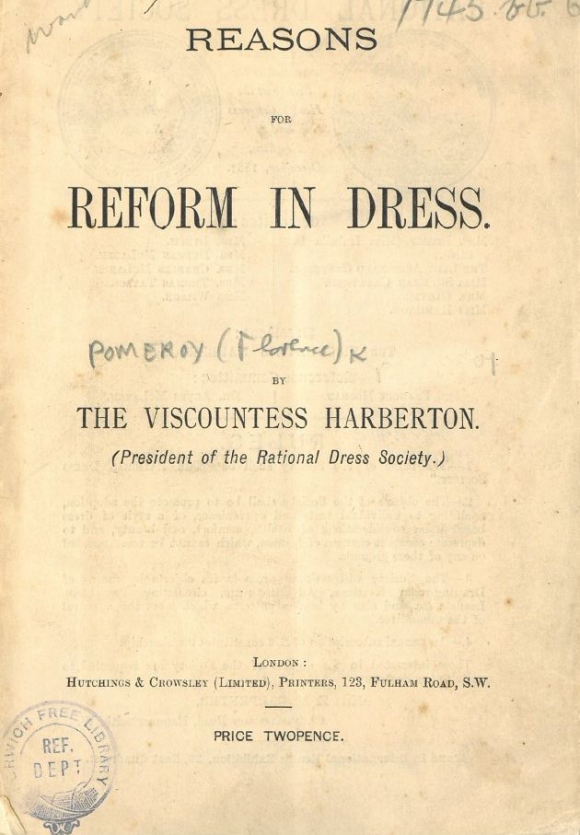 Front cover of Viscountess Harberton's Reasons for reform in dress

Skirts were absurd, amounting to the hanging of a sort of curtain round the wearer.  They combined the maximum of weight with the minimum of warmth, and were the cause of many accidents.  Queen Victoria was reported to have sprained her ankle by stepping on her dress.  Women were hurt walking, trying to run, or when getting in and out of trains and carriages.  Every quick or sudden movement was dangerous.  Interference with the power of locomotion resulted in the loss of nerve-power.  A long skirt had a ‘constant liability to disarrangement’ and was difficult to keep clean as it rubbed against the heels and dipped into dust and dirt.

Moreover, skirts were tiring to walk in – the legs had to be pushed against a mass of drapery.  Going upstairs, a woman probably raised between 2lb and 6lb of weight with her knee at every step.  Women expended maybe twice as much energy as men walking the same distance: ‘Nature gave muscles to the legs to support and convey the body, but never contemplated half the world constructing an artificial jungle for themselves to wade through as long as life lasts’.  Viscountess Harberton therefore advocated the need for women to be able to wear some form of divided skirt. 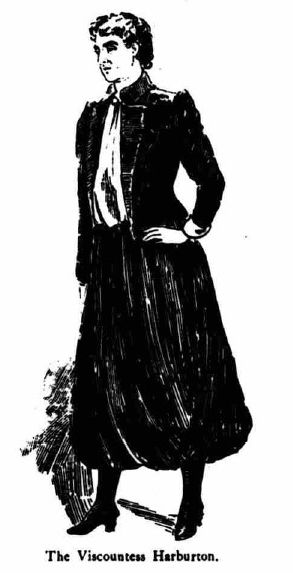 The pamphlet also discusses the ‘unmitigated evil’ of stays which displaced the internal organs and reduced the wearer’s ability to breathe.  The human form should not be altered to suit the dress: ‘would it not be wiser were all classes to combine to devise and adopt a dress which was both pretty and convenient? ... Our present dress sins against Art, it sins against Health, and it sins against Utility’.  A fresh start was necessary, ‘and if we are too faint-hearted to do this, we may as well give up the whole thing, with the humiliating reflection, that we have not fulfilled our duty in our generation, though seeing it clearly, but have left a grievous burden on our daughters, from which we could well have freed them, but we lacked the courage of our opinions’.