At the start of the 19th century, Bengal became the home for the Shakespear family of Calcutta, whose ancestry dated back to close relations of William Shakespeare. 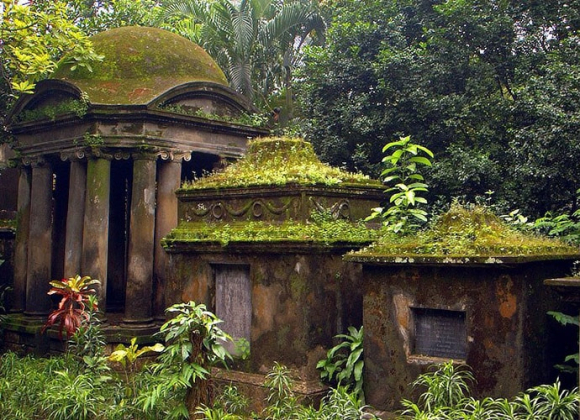 In Calcutta’s South Park Street Cemetery, one can still find two Shakespear tombs. One of them belongs to John Talbot Shakespear, born in 1783 to John and Mary Shakespear in England; the other belongs to his wife Emily.  Shakespear arrived in Calcutta during the early 1800s as an East India Company official, marrying Emily Amelia Thackeray in 1803.  She was the eldest daughter of William Makepeace Thackeray senior, who was the grandfather of the more famous Calcutta-born author William Makepeace Thackeray.  Emily’s brother, Reverend Francis Thackeray, married John Talbot Shakespear’s sister Mary Anne.  Another brother, Richmond, arrived from London around the same time to become the Secretary to the Board of Revenue.  He married Anne Becher and their son, William Makepeace Thackeray, was born in 1811 at Thackeray House in Alipore.  Clearly, the eminence of the Thackerays seems to have overshadowed the lineage of the Shakespearean relative in their midst.  Thus, Thackeray’s father’s name Richmond also became the name of the youngest son of John Talbot and Emily Shakespeare, Sir Richmond Campbell Shakespear.  He would later acquire renown as an agent to the Governor-General of Central India and a Companion of the Bath.  Another son of John Talbot and Emily was named William Makepeace Shakespear.

But what do we know about John Talbot himself, and how does his ancestry trace back to Shakespeare?

John Talbot Shakespear was appointed by Richmond Makepeace Thackeray as the assistant to the Collector of Birbhum.  John’s brother Henry also served in the Bengal Civil Service. John’s own successful career at the East India Company was truncated by his death at sea on board the Rose in 1825, a few months after the death of his wife.

Extract from John Talbot Shakespear's will specifying burial in a grave he had purchased next to his wife's IOR/L/AG/34/29/37 p.46 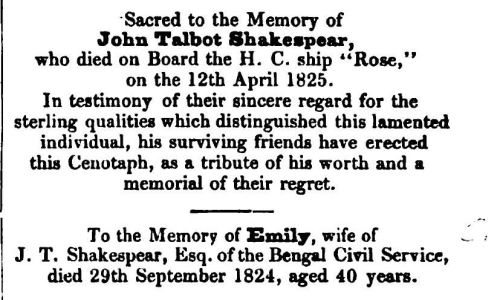 We cannot ascertain whether the Thackerays knew about John Talbot’s illustrious relative.  The oldest recognizable discovery of John Talbot’s lineage dates back to George Russel-French’s Shakspeareana Genealogica (1869), later reproduced by Charlotte Carmichael Stopes in Shakespeare’s Family (1901).  Despite the variant spelling of this ‘Shakespear’ branch (without the ‘e’), it belonged to the Stepney (or Shadwell) Shakespears.  They had either descended from William Shakespeare’s brother Gilbert, or his uncle Thomas.  Russel-French claimed that this family tree was supplied to him by Lieutenant Colonel John Davenport Shakespear, a nephew of John Talbot.  Key evidence to the linkage between the Shakespeare and Shakespear families was two-centuries old ‘drawing on a parchment of a coat of arms, pronounced by an eminent herald’ which is exactly the same as the coat of arms granted to William Shakespeare’s father in 1596.  John Davenport Shakespear possessed this in the 1860s.

India has been generous to Shakespeare, adopting his works.  However, John Talbot has not been recognised, as his and his wife’s tombs languish in oblivion.  Recently, there have been reports of former British prime minister David Cameron’s lineage dating back to John Talbot Shakespear.  But historians are yet to take note of the Shakespear in question being a significant leaf on a stem of the bard’s family that branched out to India.