Fireworks in India for Queen Victoria

A Royal Proclamation was published in India on 1 November 1858 transferring government from the East India Company to the Crown.  The document, addressed to the Princes, Chiefs, and people of India, was read out in the open in many places in both English and vernacular languages.  Public displays of fireworks and illuminations were organised to celebrate the change. 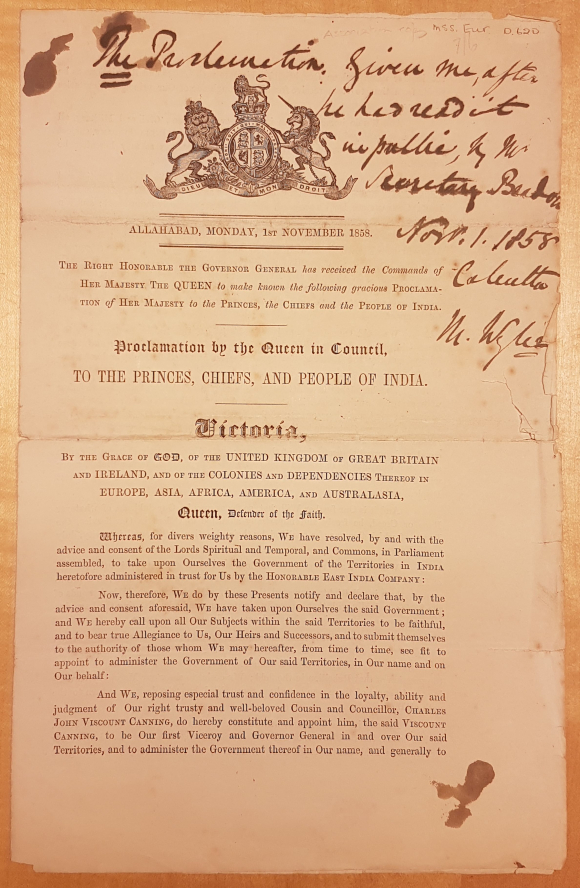 Copy of the Proclamation by the Queen in Council dated Allahabad 1 November 1858, announcing the transference of the government of India from the East India Company to the Crown - British Library Mss Eur D620

The transfer of power from the Company to the Crown took place in the aftermath of the Indian Rebellion. Viscount Canning was appointed first Viceroy and Governor General.  The proclamation announced that all Company civil and military personnel were confirmed in post ‘subject to Our future pleasure’.  Treaties and engagements made with Princes of India were to be ‘scrupulously maintained’.  No extension to present British territories was desired and the ‘Rights, Dignity, and Honour’ of the Princes would be respected.  Internal peace and good government would secure social advancement for the whole of India.  The native peoples of British India would be treated with the same obligations of duty as all Queen Victoria’s other subjects.  There was to be no imposition of Christianity, no discrimination on religious grounds, and no interference with belief or worship.  People of any race or creed would be able to hold office if qualified ‘by their education, ability, and integrity’.  Ancient rights, usages and customs would be respected.

The proclamation also spoke of the Rebellion, lamenting ‘the evils and misery which have been brought upon India by the acts of ambitious men’.  Pardons were offered for all ‘Offenders’ except those convicted of ‘having directly taken part in the Murder of British Subjects’.

Viscount Canning presided over the proclamation ceremony at Allahabad, which began with a salute of nineteen guns and the national anthem.  The document was read out in English, followed by an Urdu translation.  A firework display lasted from 8.30pm to nearly midnight – ‘trees of fire, crackers, squibs, whirligigs, and rockets’.

In Calcutta, large numbers of people gathered to hear the proclamation read from the steps of Government House, first in English and then in Bengali.  The royal standard was hoisted, cheered by the Europeans in the crowd.  At night there was a wonderful display of gas light illuminations.  The Homeward Mail was impressed: ‘ No other city in the world could have prepared such a sight... The City of Palaces shone a city of fire… we do not think any pen can paint the beauty of the scene’.  Even the smallest shops were decorated with a few lights.

Crowds flocked to the fort in Bombay to hear the proclamation in English and Marathi.  Ships in the harbour then fired a salute of 101 guns.  The fireworks were on a scale never before seen in Bombay and workmen had spent days constructing elaborate illuminations on government buildings and the private mansions of prominent Indians.  Poor citizens had decorated the narrow streets and alleys.

At Madras the proclamation was read in front of an invited European audience of about 100, and there was a gun salute.  According to The Homeward Mail the only Indian present was the man who translated the document from English.  However a week later there were ‘some bad fireworks’, dancing girls and jugglers, and a state ball at the illuminated banqueting ball.