We continue our story of Miguel de Lima e Souza.

Miguel was now part of the British establishment in Bombay, both politically and socially.  He was a member of the Insurance Society, a key association of those who mattered financially.   The Bombay Almanac of 1798 announced the birth of his son and listed him among the ten most prominent European merchants in Bombay.  Father Ernest Hull wrote that Miguel was one of the richest people in Bombay. 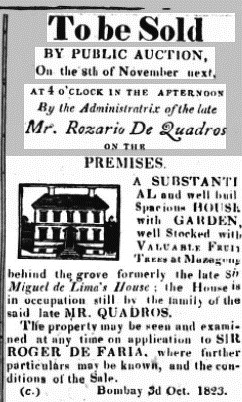 Miguel's connections destined him to play the leading role in the Padroado-Propaganda struggle, which at one point threatened the future of the Catholic Church not only in Bombay but also the whole of Asia.  This was a very complex matter with its roots going back to the early 16th century.   In Miguel’s time, Rome was attempting to take on greater responsibility for the Church in the East, a role which was strongly resisted by the Portuguese state and church which had traditionally had the right of ‘Patronage’, or the authority to manage and have the last word in all ecclesiastical issues in the region. 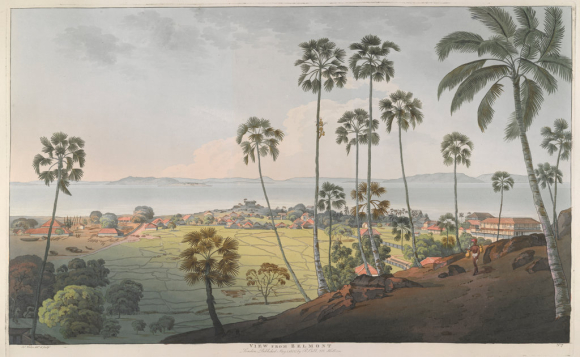 View from Belmont looking towards the back of the harbour including part of the village of Mazagon, the islands of Carranjar, Elephanta and Butcher bounded by the hills of Mahratta country - from James Wales, Bombay Views: Twelve Views Of The Island Of Bombay And Its Vicinity Taken In The Years 1791 And 1792 Shelfmark: X 436

At that time, Bombay was under Propaganda or the direct authority of Rome.  Sir Miguel now fell foul of the local authorities.  According to Father Hull, Miguel asked to have a prominent Protestant stand as godfather to his son, and this request was refused as being contrary to Church law.  This apparently was so offensive to Sir Miguel that he set in motion a process with the support of the British both locally and in London, as well as the backing of the Primate of Goa and Lisbon, that led to the transfer of Bombay to the jurisdiction of the Padroado Archbishop of Goa.  This proved unpopular locally with both the foreign elite as well as the lower classes of indigenous Catholics and the decision was reversed.  Miguel however leveraged all his political and social status to reverse this decision in turn and this led to a lot of ecclesiastical turmoil eventually leading to what is called the Double Jurisdiction, with some Churches under Rome and others under Goa.  The resulting bitterness led to a serious rift amongst the Catholic population, both people and priests, with one group of priests coming under the threat of excommunication in what is known as the Salsette schism.

Miguel was the spearhead of the Propaganda party initially, aiming to make the local church self-sustainable by founding a seminary known as the Bombay College on his own property.   But his efforts for local autonomy were not successful and the Propaganda parishes came under the tight control of the authorities of Goa.  There were stories that Miguel later regretted his role in the split and reportedly was reconciled to Rome and Propaganda on his deathbed.  While there is no direct evidence for this, his grandson Miguel de Lima e Souza (Junior) owed allegiance to Propaganda.  But that is another story!

Miguel of Mazagon, Mumbai- Part One