Report of a crash-landing of a Japanese bomber

The papers of Frank Owen Bell, Indian Civil Service officer, contain some fascinating reports of a fire-fight between local police and a group of Japanese airmen during the Second World War.  The file in the India Office Private Papers consists of reports and telegrams between 25 and 30 December 1942 circulating between local government officials in the area of Kalapara in the District of Patuakhali in Bengal (now Bangladesh).  As the reports circulated, a picture began to build up of a dramatic skirmish as the Japanese air-crew attempted to evade capture. 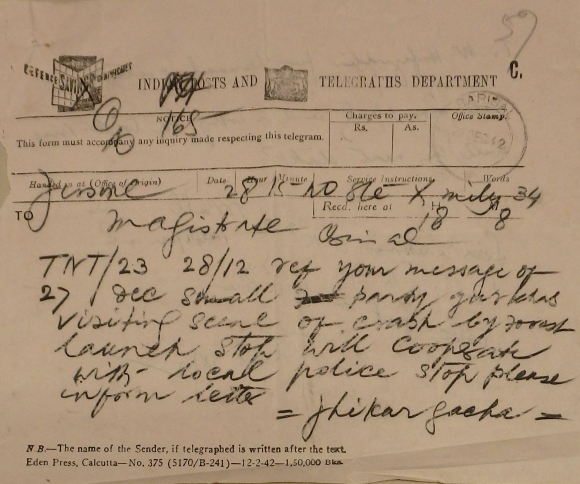 On 24 December at 10.40 in the evening, a Japanese bomber crashed at Dhulasar, a few miles from the sea shore.  The plane had been struck by anti-aircraft fire causing it to crash heavily.  The seven crew members all survived, with only 2 being slightly wounded.  No doubt frightened and confused, they approached a nearby house, but the residents fled thinking them to be robbers.  The following morning, having taken shelter in the house for the night, the Japanese airmen looked for someone who could help them escape by sea but were hindered by being unable to speak the local language or any English.

Around this time local police officers, consisting of a head-constable and four constables, arrived and began searching for the airmen.  At about 11.00am, they spotted the Japanese airmen crossing a river, and immediately opened fire.  The Japanese retaliated with machine gun fire before retreating into the jungle.  No-one was hit and the policemen kept guard on the river bank. 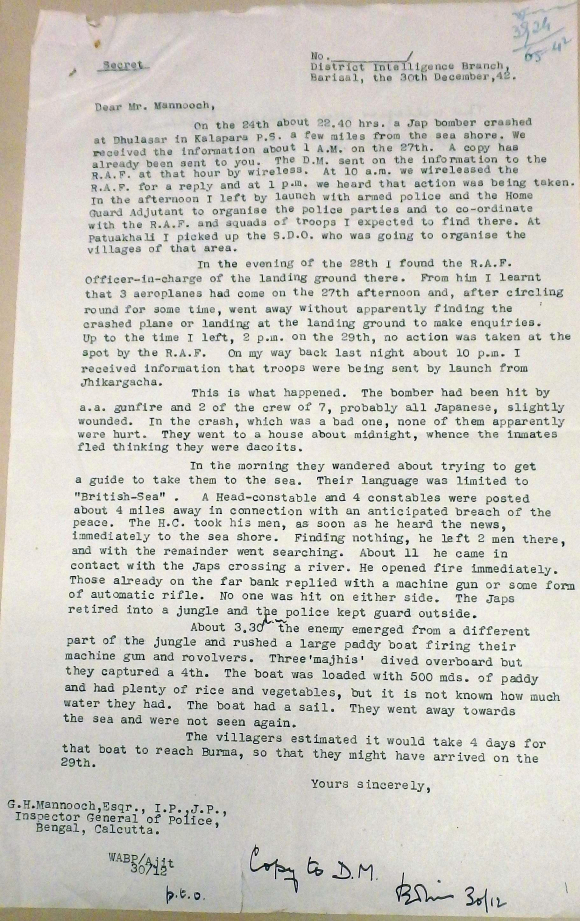 At around 3.30pm, the Japanese airmen emerged from a different part of the jungle, and rushed a large boat firing revolvers and a machine gun.  The fishermen on the boat dived overboard and swam to safety.  The boat was loaded with rice and vegetables, and was equipped with a sail.  The airmen set sail out to sea, and were not seen again.  In a printed report of the incident sent to the Inspector General of Police in Bengal, it was estimated that it would take four days to sail to Burma.  Search aircraft attempted to locate the Japanese airmen without success.  A handwritten note on the back of the report commented that the villagers were naturally frightened but showed no pro-Japanese or anti-British sentiments.

Born on June 1907, Bell was educated at Christ’s Hospital at Horsham, and Christ’s College, Cambridge.  He joined the Indian Civil Service on 16 October 1930, and arrived in India November 1930.  He served in Bengal as Assistant Collector and Magistrate; and in December 1931 was promoted to Joint Magistrate and Deputy Collector.  From October 1936 he was a Settlement Officer.  He was awarded the OBE in January 1946. On returning to England in 1947, Bell qualified as a solicitor and worked for the Greater London Council.  He died in 1991.