Within the Clarkson Papers there are a number of volumes relating to the settlement of Freetown, Sierra Leone, from 1791 onwards.  These were explored in a series of Untold Lives blogs called The Lives and Letters of the Black Loyalists.   We return to these papers to explore a number of fascinating folios of correspondence between John Clarkson and King Naimbanna II.

King, or Obai, Naimbanna II (1720-1793) was a leader of the Koya Temne Kingdom on coast of Sierra Leone.  Agents of the Sierra Leone Company negotiated with Naimbanna in 1788 and persuaded him to sign over some of his land for the Company’s settlement.  Naimbanna later stipulated that the deal had been negotiated too hastily and should not have been given consent.  A digitised version of this treaty is available to view via the British Library’s Endangered Archives Programme.

When John Clarkson arrived in Freetown at the end of 1791 he made a conscious effort to engage with Naimbanna as the local leader.  Documents from his papers show that collaboration was deemed essential in order for the new settlement to succeed. 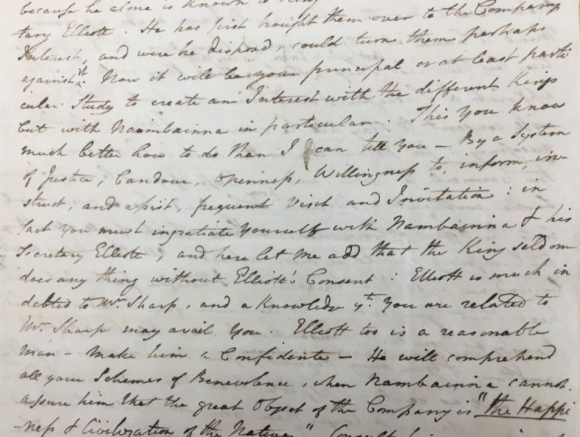 Instructions from abolitionist Thomas Clarkson to his brother John, the Governor of Freetown, to ‘ingratiate yourself with Naimbanna and his secretary Elliot’. Add MS 41262A, f.65.

A working relationship was established, as the documents below illustrate.  Naimbanna gave these folios to John Clarkson when the governor was due to depart Sierra Leone for England at the end of 1792. 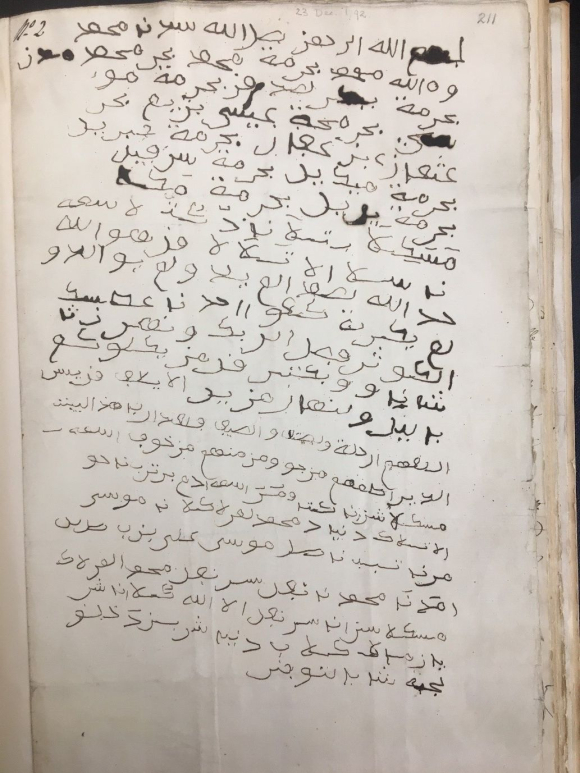 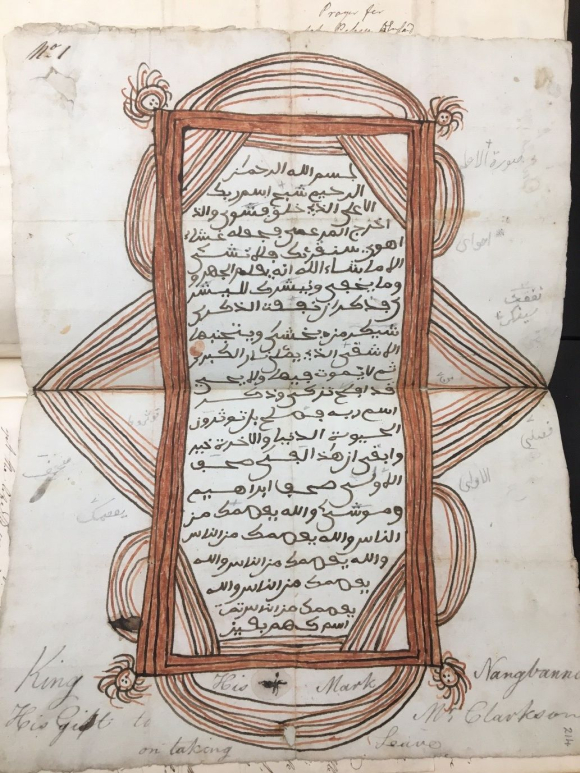 These fascinating folios stand out among Clarkson’s papers.  They are described as prayers or good luck charms.  Written in Arabic, they consist of scraps of sentences from the Koran that the author hopes will protect the bearer on his journey.  Other notes present with these papers describe the folios as badly written, but despite this criticism from Clarkson’s contemporaries, these letters are important historical documents in their own right.  They illustrate Naimbanna’s cautious engagement with the new settlement and his relationship with its governor Clarkson.

Naimbanna engaged diplomatically with the new settlement believing it could offer certain benefits.  He backed the original abolitionist mission of its founders, aimed to benefit from a proliferation of trade and sought out specialist education for himself and his sons.  Naimbanna sent his children abroad to experience different educations in different parts of the world.  His son Prince John Frederic would travel to England in 1791 to receive an education under the sponsorship of abolitionist and activist, Granville Sharp. 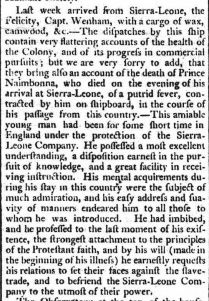 With this openness and pragmatism of approach, Naimbanna hoped to both take advantage of the opportunities the new colony could open for the Kingdom, whilst retaining power as the rightful leader of the region.  However, cordial relations would not last.  Naimbanna died in 1793 as did his son, Prince John Frederic, whilst in transit back from England.  Successive Temne dynasties fought with neighbouring communities in an effort to consolidate their lands, but ultimately these lands were taken by the British in the latter half of the 19th century.  The British made Sierra Leone a British protectorate in 1896 and despite the Temne revolts in 1898 they would govern until Sierra Leone gained independence in 1961.

Further Reading:
Lives and Letters of the Black Loyalists, Parts 1-4.
Ijagbemi, E. A. 'THE FREETOWN COLONY AND THE DEVELOPMENT OF ‘LEGITIMATE’ COMMERCE IN THE ADJOINING TERRITORIES', Journal of the Historical Society of Nigeria, vol. 5, no. 2, Historical Society of Nigeria, 1970, pp. 243–56.
Kup, A. P. 'John Clarkson and the Sierra Leone Company', The International Journal of African Historical Studies, vol. 5, no. 2, Boston University African Studies Center, 1972, pp. 203–20.
.