Oysters in the Black-Out

You can catch this Maison Prunier menu, dating from December 1940, in the small display about the Second World War, Life on the Home Front, in the Treasures of the British Library Gallery until 11 December 2021.  It forms a counter-point to the ration books in the same case which reflect the introduction of food rationing in January 1940 and the queues and hardships that followed. 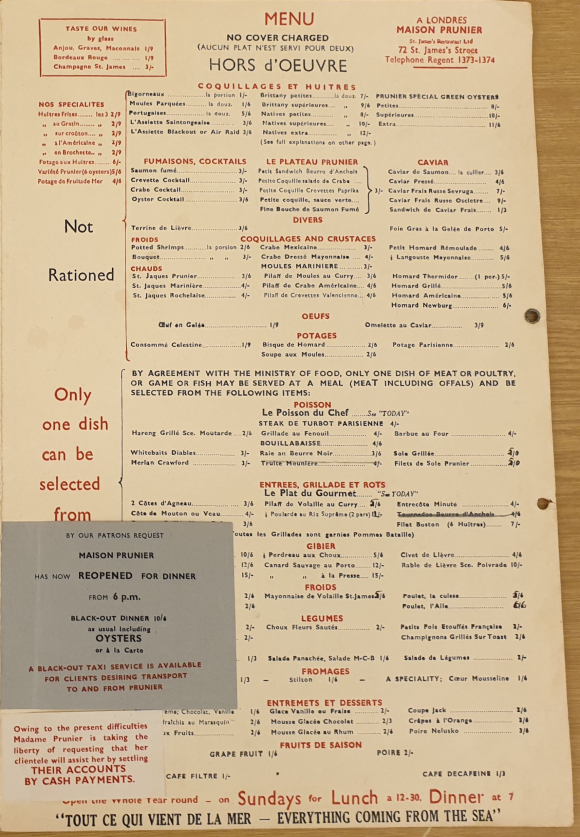 The first Maison Prunier was opened in Paris in 1872 by Alfred Prunier and his wife Catherine.  Their granddaughter Simone, with the assistance of her husband Jean Barnagaud, took over the Parisian restaurant, which had become famous for its oysters, on the death of her father Emile in 1925.  Ten years later she opened the London branch in St. James’s Street, off Piccadilly and near Green Park.  Having looked at several potential buildings in the area she had chosen a dauntingly large site which had previously been a Rumpelmayer’s teashop.

The interior decoration was created by her friend, the artist Colette Gueden, and was based on Simone’s childhood recollections of Jules Verne’s Twenty thousand leagues under the sea.  The design included two glass cases which created the illusion that you were eating while looking out from portholes in a submarine.  The opening reception on the evening of 17 January 1935 was almost too successful in creating publicity and the restaurant was overwhelmed with eager clients the following day.  Among the subsequent patrons were the then Prince of Wales and Mrs Simpson.

Simone championed the use of cheaper fish including herring and mackerel and her book, Madame Prunier’s fish cookery book, was first published in 1938 and reprinted several times.  In contrast to the restaurant perhaps, it was aimed at a fairly general audience, providing recipes for both the proficient and the less-proficient cook.

With the advent of war and the black-out in September 1939 the evening trade at Maison Prunier initially declined, but a prix-fixe menu encouraged people to return and by January 1940 it also opened on Sundays to attract those on weekend leave.  At the start of the Blitz in September 1940 the restaurant closed for dinner but again Simone came up with a plan to encourage customers back.  She appointed a taxi-driver specifically for Maison Prunier and advertised an air-raid lunch and a black-out dinner as you can see here.  With the difficulty of obtaining supplies and rationing, this was not a simple operation, and customer numbers remained relatively low.  Items which are rationed are clearly noted on the menu and as you can see 'only one dish of meat or poultry or game or fish may be served at a meal'.  However, the famous oysters were still available.

Though affected by bomb blasts and subject to the general restrictions on the amount that could be charged for meals, Maison Prunier survived the war and continued in business at St. James’s Street until 1976.