The stork in fable and record

In September 1942, a flock of around 200 white storks (ciconia ciconia) arrived in Bahrain, as reported in the intelligence summaries from the country.  A ring on one of them showed that it had come from Lithuania.  They were shot at by the Bahrainis, who did not recognise the species, whereas elsewhere in the Middle East they were never harmed, suggesting that they were very infrequent visitors in Bahrain.  The report continues: ‘it was, no doubt, a coincidence that the same night a son was born to Mrs. Wakelin, wife of the Bahrain Government Director of Education’. 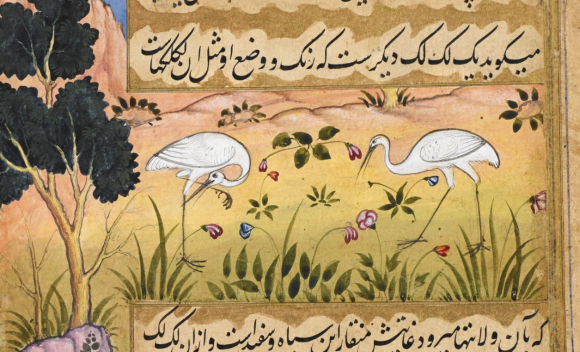 Stories about storks have circulated for millennia.  Their size makes them extremely visible and their habit of nesting on roofs of buildings, which also allowed their care of their chicks to be seen.  This, combined with their apparent care of the old and monogamous habits, led the Romans to believe that when they reached old age, they were transformed into human shape as a reward for their piety.

Storks have also been considered extremely lucky birds.  As travellers visited the Persian Empire and the Middle East, they frequently remarked on the presence of storks as the birds were common in mainland Europe, particularly the Netherlands and Eastern Europe, but almost unknown in Britain.  They were considered as generally bringing good luck to the house on which they nested, and therefore were never harmed.  In 1758 Edward Ives described the scene in Baghdad: ‘You generally see on the Minarets the Stork, a large bird called by the Arabs Leg-leg, a destroyer of serpents; the Turks never offer to molest it…those who own a house where Storks have nested, are supposed to receive great blessings from heaven'. 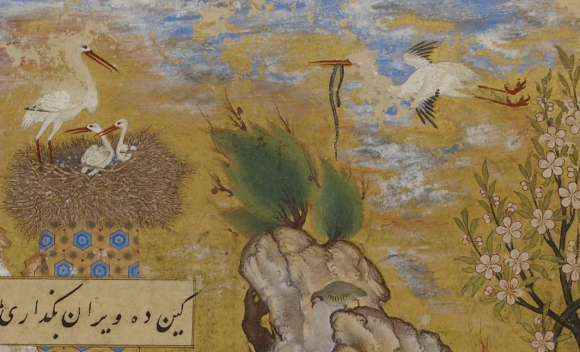 Some hints about the origin of this belief can be found in the name sometimes given to them, haji laqlaq, suggesting that they had made a pilgrimage to Mecca.  ‘Laklak’ has existed as a name for storks since the Akkadian period, and as the main noise that storks make is clapping their bills, it is may be imitative in origin.

In the late 17th century, John Fryer visited Persepolis and remarked on the storks present there ‘which may serve to contradict the received Opinion, of Storks abiding only where Commonwealths are; this always having been an Empire’.  One of strangest stories about storks current at the time was that they would not nest under a monarchy, which served to explain why they did not nest in England, while they did in Holland and other places in Europe.

In ‘The Frogs who asked for a King’, one of Aesop’s Fables, a group of frogs ask Jupiter for a king.  He sends a log, which they play with and make fun of, and ask Jupiter for a real king. He then sends a stork, which starts to eat them.  This tale was still used as a metaphor in 1905 for two different ideas of power: King Log and King Stork.

And as for the Director of Education’s son arriving with the storks?  Despite stories from Eastern Europe and Egypt of storks having human souls, it is perhaps more likely that the story that storks brought babies was an extension of the idea that storks were ‘lucky’: a baby being the ultimate blessing a house could have.