The Ottoman Empire was the second country to abolish slavery in 1847, but the transition period between pre- and post-abolition created multiple and often conflicting ideas regarding the relationship between society and former slaves.  Slaves of almost all ethnic groups were obtained through the multiple routes of the Black Sea or Mediterranean slave trade or seized as trophies from territories outside its realms.  Yet, apart from the origins of the slaves, slavery in the Ottoman Empire bore many differences from its western counterparts.

Slavery there was not a permanent state, because slaves could buy themselves out of slavery, or masters could relieve them of their thraldom as part of Islamic worship.  Far from the western colour-based discrimination, racial differentiation within slavery was a social issue, and as such, in line with Islam’s doctrines about slavery, former slaves could reintegrate into society by taking up high socio-economic posts or even becoming heirs of their former masters as sons-in-law.

But, after 1847 there were many problems regarding the implementation of prohibiting the slave trade as the legal trade went underground.  Besides, most former black slaves continued to work in the service industry which generally sustained social hierarchies. 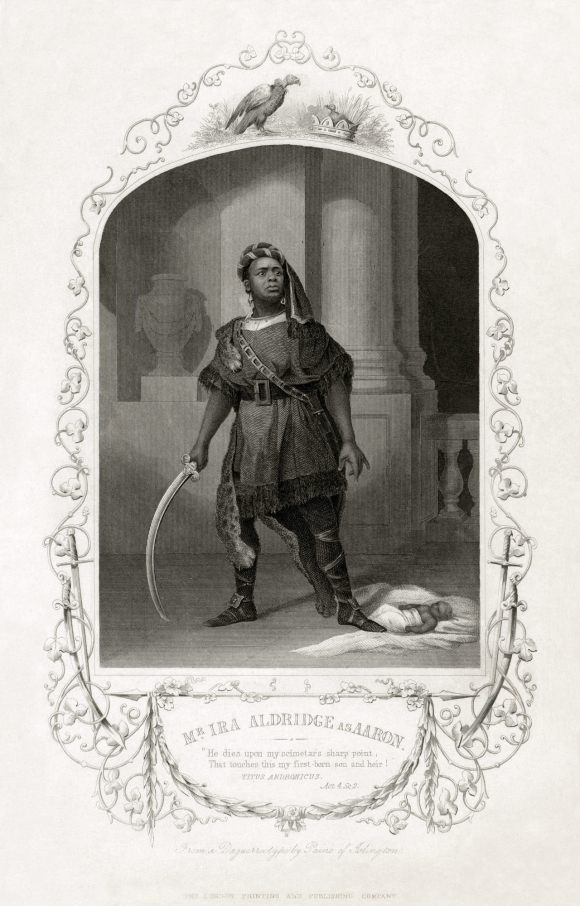 Amid this transition period in the rights of black people in Ottoman Turkey, the performance of Shakespeare’s plays by Ira Aldridge, especially that of Othello, was significant on several levels.  Despite the anti-Turkish plot, and contrary to the extremes of mixed reactions about Aldridge’s colour in the UK or the US, his performance in Ottoman Turkey was appreciated.

When Aldridge arrived in İstanbul in 1866, the Naum Theatre and the French Theatre, two of the most renowned theatre companies, competed and asked both the Ottoman court and the English embassy to help to persuade Aldridge to perform in their own theatres, a competition which the French Theatre won.  First performed on 22 March and again on 10 April 1866, Aldridge’s performance of Othello at the French Theatre was not only the first one in English in İstanbul, but also the first bilingual one; Aldridge performed his lines in English, whereas the rest of the cast did so in French.

To capitalise on Aldridge’s performance and to wreak theatrical revenge, the rival Naum Theatre commissioned Laroa’s play Otez l’O, which parodied Othello through a female-cast performance.  Although little is known about this parody, Otez l’O was not racially motivated, but rather out of theatrical rivalry and much in the vein of Aristophanean satire.  Aldridge’s commercially and artistically successful performance, the parody, and the subsequent furore in the Ottoman press contributed immensely to Othello’s prominence in either its full or in its abridged versions, popular both in the Ottoman court and among the Ottoman people afterwards.

This blog post is the first in a collaborative series with Medieval and Early Modern Orients (MEMOs).  On the last Monday of every month, both Untold Lives and MEMOs' own blog will feature a post written by a member of the MEMOs team, showcasing their research in the British Library collections.