The Madras Military Male Orphan Asylum opened in 1789 under the superintendence of Dr Andrew Bell.  It was housed in a converted army building called Egmore Redoubt which stood in an open and healthy situation.  The Asylum was funded jointly by the government and by charitable subscriptions.  Military, civil and church officials served as directors.  A Select Committee of six directors met at the Asylum once a month to deal with admissions and routine business, and to oversee the boys’ education. 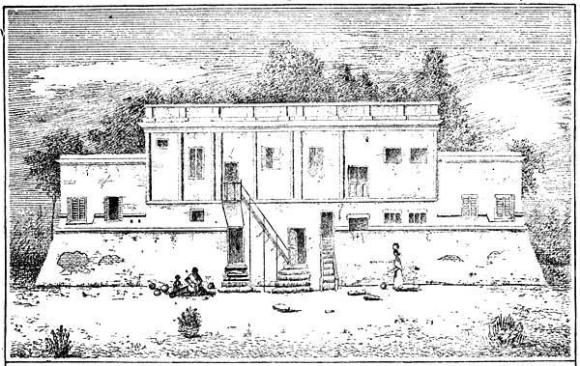 Egmore Redoubt in the early 20th century from Glyn Barlow, The story of Madras (1921)

According to the regulations established in June 1796, this was the ranking of eligibility for help from the charity:
1st Children of officers who were boarders, if the death of their parents, guardians or friends deprived them of support.
2nd Orphan children of officers if left destitute.
3rd Orphan children of non-commissioned officers and private soldiers, as it was ‘a main object of this Charity’ to make provision for them.
4th Sons of living non-commissioned officers and private soldiers whose fathers were unable to educate them.

No boy was eligible unless his father was European.  Legitimate children had precedence over illegitimate children.  Boys could only be admitted when recommended by the commanding officer of his father’s corps or by another official deemed competent by the Select Committee.  Any lame or deformed boy, or any ‘whose faculties may be deemed unequal to the elements of letters’ was admitted or rejected by the Select Committee who considered the probability of the boy becoming a permanent burden on the charity, or of his being able to earn his own subsistence at the age of fourteen or earlier.

No boy under four or over fourteen years of age was admitted, and no boy was kept on after the age of sixteen, unless he was employed as a teacher or assistant.  At the age of fourteen or before, the Asylum aimed to bind boys as apprentices to artificers, clerks, or sailors, ’or otherwise dispose of them, as may be thought likely to render them most useful and beneficial to themselves and the community’.

The sons of Europeans of all professions were taken as paid boarders, but they received the same diet, dress and treatment as the boys ‘on the foundation’.

The boys’ diet consisted of:
Breakfast: milk and rice, or coffee and rice.
Dinner: on Sundays and holidays, roast mutton and vegetables with bread; mutton curry three days a week; rice with dhal one day; vegetable curry two days.
Supper: milk and rice, or pepper, water and rice.
The surgeon could recommend changes ‘conducive to general health’.

Boys wore a shirt and long drawers, adding a sleeved waistcoat and leather cap for Sundays, holidays and going out.

Parents and others connected to the boys could apply to visit them in school between the hours of 10.00 and 12.00.  No-one was admitted on Saturday evenings or Sundays ‘to prevent crowds and irregularities’.