Protesting Against the Simon Commission

One controversial moment in India’s fight for freedom from British rule in the 1920s, was the arrival in India of the members of the Indian Statutory Commission in 1928.  The India Office Private Papers at the British Library contains some wonderful material documenting this event.

The Indian Statutory Commission was a British commission appointed on 26 November 1927 to enquire into the working of the system of government, the growth of education, and the development of representative institutions in British India, and to recommend future policy regarding further constitutional reforms.  It is often referred to as the Simon Commission after its Chairman Sir John Allsebrook Simon.  Unfortunately, the members of the Commission all belonged to the British ruling classes, and the exclusion of Indian members understandable prompted outrage in India, with both Congress and the Muslim League boycotting the Commission.  The Commission visited India twice, once in February/March 1928, and again from 11 October 1928 to 13 April 1929, and wherever they travelled there were protest marches.  Protestors questioned the Commission's legitimacy and demanded that it leave India. 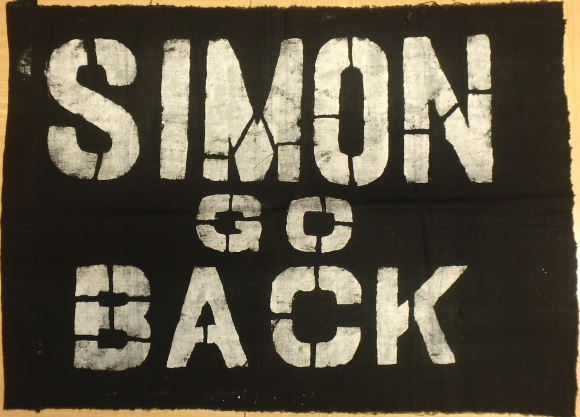 One particularly striking item in the Private Paper collections relating to these protests is a black flag with the words ‘Simon Go Back’ in white lettering, reference Mss Eur D856.  The flag had been given to Lady Carter, wife of Richard Henry (later Sir Archibald) Carter, Assistant Secretary to the Commission.  It had been presented to her while on a visit to the United Provinces by the Governor, Sir Malcolm Hailey (later Baron Hailey).  Of him, she wrote: ‘I first saw him at a tennis party and he swooped down on us like a great hawk.  Everybody seemed frightened of him, but I loved him at first sight’.  The story Lady Carter told of how Lord Hailey obtained the flag was that he had joined one of the processions against the Commission.  She said: ‘He gave me one of the black flags that they carry in the processions against the Commission, with a SIMON GO BACK on it’. 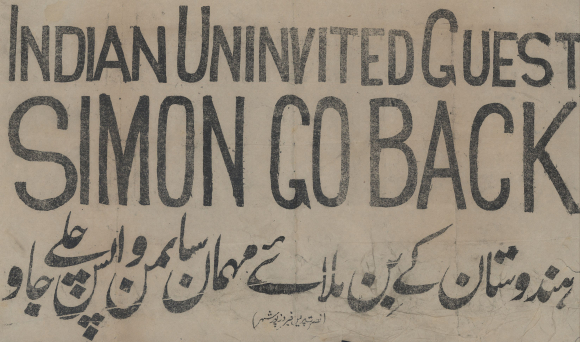 The Commission published its report in two volumes in 1930 to further criticism and condemnation in India.  It was rejected by virtually all parts of the Indian political spectrum, and in London it sparked a march from Trafalgar Square to Victoria Station by around 200 protestors.  The British Government responded by holding a series of Round Table Conferences held in London between November 1930 and December 1932.  This eventually fed into the reforms incorporated into the 1935 Government of India Act.