The man who lost his memory – Part 2

We continue our story of the Reverend Philip Read, looking at his work and travels across the globe.

Philip Read (or Philip Chesshyre Read) was born in 1850 in Hyde, Cheshire, the son of Anglican clergyman Alexander and his wife Anne Whiteway.  He was educated at Manchester Grammar School and won a scholarship to Lincoln College Oxford.  He served as a sub-lieutenant in the Oxford Rifle Volunteers.  After graduating, he taught at Marlborough before being ordained as a priest in 1874.  He was headmaster of the school at Newton in Lancashire in 1876.  The following year Read took up an appointment at Bishop’s College in Lennoxville, Quebec, where he became Professor of Classics and Moral Philosophy.  He travelled a good deal, visiting many countries including the West Indies and Spain.

In 1879 he married Helen Rosina McCallum, the daughter of a Quebec barrister.  Their sons Alexander Cuthbert and Philip Austin Ottley were born in Canada before the family moved to England.  Daughter Helen Chesshyre Hazlehurst (known as Hazel) was born in Newcastle in 1889. 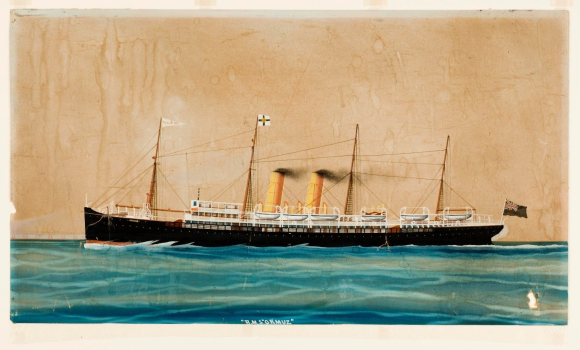 At the time of the April 1891 census the Reads were living in Jesmond, but in the autumn of that year they sailed on RMS Ormuz to Ceylon.  Read was installed as Warden of St Thomas’ College Colombo.  There are reports of the family’s activities in the Ceylon Observer, including Philip Read’s stay in the hill town of Nuwara Eliya to recover his health when struck by illness in January 1893.

The College history describes Read as ‘a brilliant scholar and a great preacher’, kind-hearted with a keen sense of humour, a talented organist and pianist.  However he was said to have been unsuited to the post of Warden, as well as being burdened by ‘private sorrows’, and he left the College in 1895.

After Read’s breakdown and memory loss described in our previous post, he returned to South Asia to perform missionary work in Rangoon.  However his health failed again and he went back to England in 1899.  He then served as curate in Walmsley Lancashire, taking special charge of St Andrew’s Mission Church at Toppings.

In 1901 he was boarding with the family of a lithographic printer in Turton, apart from his family.  Son Philip was a pupil at Haileybury College.  Hazel was living with her uncle Thomas Wood Shaw in Bolton.  Alexander, a clerk, had left Liverpool for New York in July 1900 on board SS Lucania.  The passenger list states that he was joining his mother Helen in New Jersey.  Helen appears to have moved between the United States and Canada before setting in Los Angeles.  She died there in 1942. 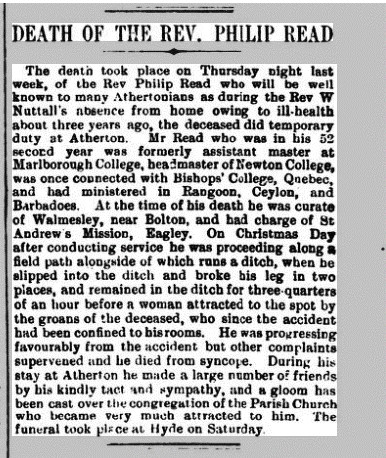 Philip Read died in January 1903 following an accident on Christmas Day when he slipped into a ditch and broke his leg.  His death was widely mourned, not only by his congregation in Lancashire who had warmed to his ‘kind tact and sympathy’, but also in Ceylon where he was remembered as the ‘most eloquent, most cultivated and most genial of Wardens’.