The Spy Who Came in from the Circus: Haji Ali Germani

In 1915, a man was arrested near the Iranian port of Bandar Lengeh by levies in the pay of the British Consulate, accused of inciting the local population against British interests.  He was ‘fair, though now very sunburned’, with ‘fair hair and grey eyes’, spoke German, English, Farsi, and Arabic, and went by the name of Haji Ali Germani.

The arrest took place against a tumultuous backdrop.  To weaken Britain in Europe during the First World War, Germany and its allies were striking at the British imperial system in Asia.  German, Austrian, and Ottoman agents, along with Indian revolutionaries, were spreading across Iran, approaching Afghanistan and causing panic among the British occupying India.  The arrested Haji Ali was believed to be working with German agents, most prominently the feared Wilhelm Wassmuss, ‘the German Lawrence’, to weaken British influence over southern Iran, and thus the Persian Gulf and route to India.

Haji Ali told his captors that his mother was a German circus performer and his father a ‘Moor’ (North African).  He himself had started out as an acrobat, before joining the firm of Robert Wönckhaus, a former Zanzibar slave trader who had moved into business in the Gulf.

Haji Ali was already known, and distrusted, by British authorities.  He had been involved in Wönckhaus’s concession to mine red oxide on Abu Musa island, which hawkish British officers perceived as a threatening German intrusion into the jealously-guarded Gulf and quickly had shut down.

After his arrest Haji Ali was deported to India.  On reaching Bombay [Mumbai] in October 1915, he was sent into internment in Jutogh in the Himalayan foothills.  He was escorted on the long journey north by one Sub-Inspector Schiff, an Arabic speaker in Bombay’s colonial police, who coaxed information from him about Indian revolutionaries with the Germans in Iran.  After ‘a large glass of brandy (neat) and several glasses of beer at Delhi station’, Haji Ali revealed that German agents were planning to ship arms to Indian revolutionaries from Shanghai, taking advantage of relaxed checks on ships coming to India from the east.  After sobering up, he was ‘very much exercised at having said so much and bound Sub-Inspector Schiff to secrecy by all the oaths in the Arabic vocabulary’. 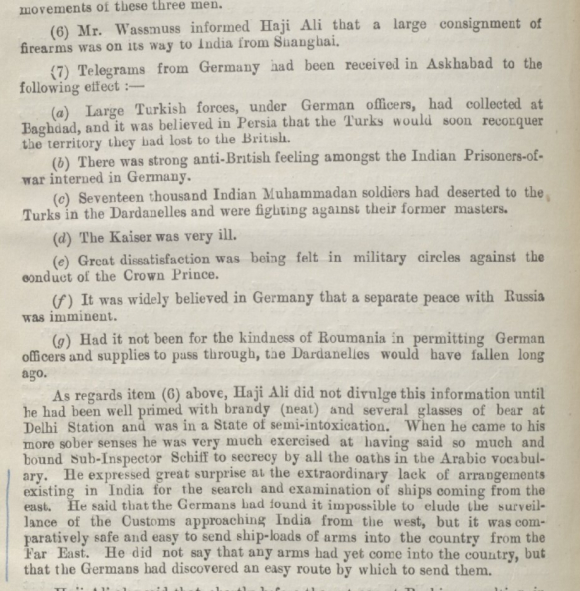 Schiff judged that Haji Ali was not a ‘true [German] patriot’, and could be led to make further ‘revelations of interest’.  Thus, no sooner did Haji Ali reach Jutogh than he was sent back to Bombay for further interrogation.  There, he revealed the location of the keys to Wönckhaus’s safes, buried near Lengeh, among other fragments of information.

We hear little more of him.  In 1916, he was transferred to a prisoner-of-war camp in Thayetmyo, Burma.  After the war he seems to have returned to Iran – a 1922 file mentions him back in Lengeh, working in Customs.

It is not clear if Haji Ali really was actively involved in German wartime conspiracies, or simply a bystander.  Either way, he was a colourful bit-player in a tempestuous period in Iran.

Despite declaring itself neutral in the war, Iran became a battleground for rival powers, was occupied by British, Russian, and Ottoman troops, and was wracked by shortages, inflation, and famine, causing immense suffering among ordinary Iranians.  Theirs are among the truly untold lives of the First World War.