The India Office Family History Search (IOFHS) is a database amassed from a wide variety of biographical sources contained within the India Office Records and Private Papers.  It contains references to births, marriages, and deaths and other biographical information.  It’s a wide-ranging resource on people connected to India (and South Asia more widely) via the East India Company and the India Office, be they European, of mixed Anglo-Indian parentage, or of Indian descent. 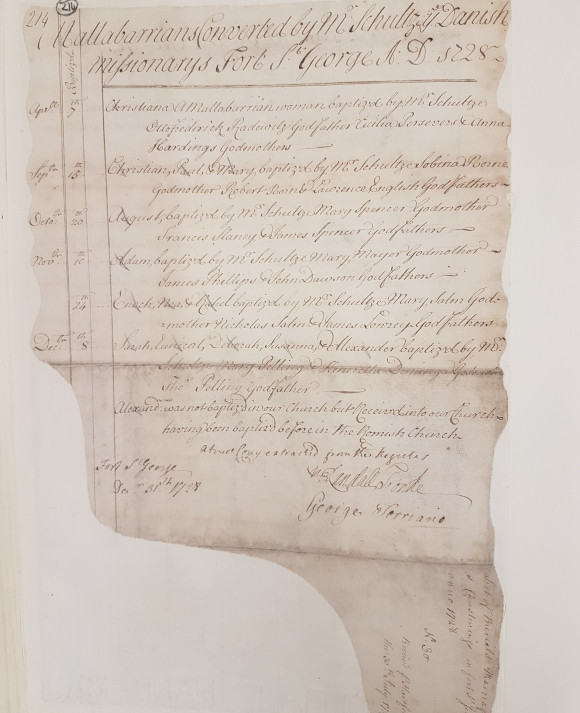 Searching IOFHS brings up the records of 96 baptisms in Madras between April 1728 and June 1729, contained in the volume Madras Baptisms Marriages and Burials, 1698-1788 (IOR/N/2/1).  The 96 individuals have no recorded surnames, but each record contains the phrase ‘Malabarians converted by Mr Schultze, Danish Missionary’.  The baptisms start as a trickle; 14 are recorded in 1728, but 1729 starts with a flood with 45 people baptised in January and February, with a further 28 in March and April.  Many of the baptismal names are Westernised (Helena, Philip, Tobias) and unsurprisingly many are biblical (Adam, Sarah, Enoch). But some names are non-Western (Mallappen, Potamei, Suttami).  No previous names are recorded. 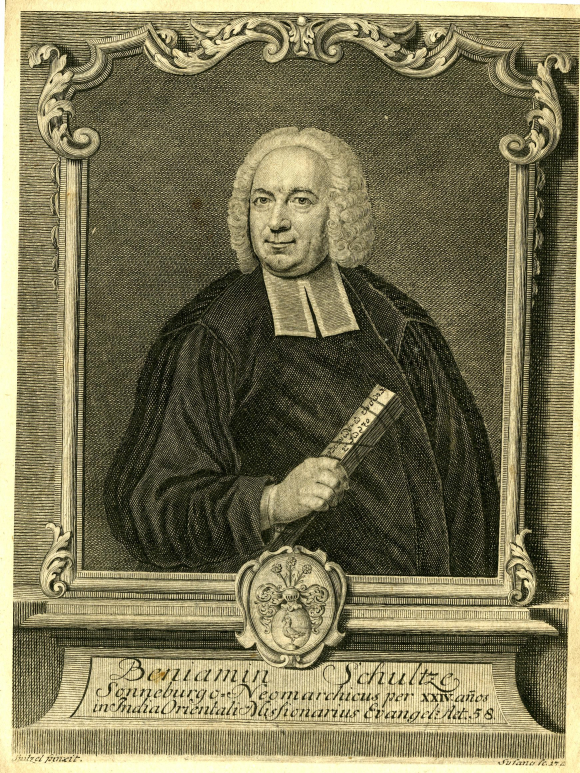 Portrait of Benjamin Schultze 1745 © The Trustees of the British Museum

This flurry of baptismal activity was carried out by Benjamin Schultze (1689-1760), founder of the ‘English Mission’ in Madras.  He was not actually Danish; he had arrived in India in 1719 as a missionary with the Danish-Halle Mission to Tranquebar.  He was born in Sonnenburg, Brandenburg, and studied at Halle.  On his ordination, he became the first Lutheran minister ordained in India.  Schultze was in charge of the Danish Lutheran mission in Tranquebar from 1720, but in-fighting amongst the missionaries, conflict over the ecumenical direction of the mission and a difficult relationship with local officials somewhat hampered its functioning.  Nevertheless, Schultze had learned both Portuguese and Tamil, and the mission had been successful in translating and printing various biblical and devotional works into Tamil, as well as grammar books and school texts.  In this the mission was supported by the Anglican Society for Promoting Christian Knowledge (SPCK).

In 1726 Schultze travelled to Madras with the intention of establishing a Protestant mission; he viewed the city as strategically important in expanding European missionary work in south India.  He petitioned the East India Company directors, the Governor of Madras, and the SPCK for support, and in August 1728 established the ‘English Mission’ at Vepery.  It was effectively a joint Anglican-Lutheran venture between the SPCK and Halle.  As in Tranquebar, Schultze set out to learn the local languages - mastering Telugu and later Dakkhini (or Deccani) in order to work with local communities.  The records show that Schultze also ministered to the English and other Europeans in the city.  The register for 1728 and 1729 includes a separate section for ‘Malabarians converted by Mr Schultze’.  In this context, Malabarian appears to suggest Tamil (or perhaps Telugu) speakers, rather than a person from the Malabar Coast.  Godmothers and godfathers from the Europeans among the congregation are listed as standing for each convert, or group of converts.

Schultze left the Madras Mission in 1743 to return to Europe, leaving the Mission in the hands of Johann Fabricius (1711-1791).  By that time the congregation had grown to 691 members.  Schultze’s linguistic works while in India included translation of the Bible into Telugu and a Telugu Grammar (although neither were published in his lifetime), as well as the translation of the New Testament and Psalms into Dakkhini, and a Dakkhini Grammar.

Further reading:
India Office Family History Search
IOR/N/2/1 Madras: Baptisms, Marriages, Burials 1698-1788
A. Westcott, Our Oldest Indian Mission: A Brief History of the Vepery (Madras) Mission (Madras Diocesan Committee of the Society for Promoting Christian Knowledge: Madras, 1897)
“I Appeal to the Whole Christendom”: The Place of Benjamin Schultze in the History of [the Lutheran-Anglican] Ecumenical Cooperation during the Second Quarter of the Eighteenth Century (1719-1743) by Peter Vathanayagamony, PhD Dissertation, Lutheran School of Theology at Chicago, May 2006.