The Levant Company clerk John Sanderson had arrived in Istanbul on 12 March 1592.  However, something had changed in the behaviours and manners of the English residents since his first being there.  Sanderson wrote that there had been a ‘great alteration; frome serving God devoutly and drinking puer water, nowe to badness stoutly and much wine (the witts hater).’  In Sanderson’s absence the embassy had been taken over by Edward Barton and Sanderson now had to decide whether to move in with him.  Despite his reservations, the benefits – and probably also savings– were too great to forego Barton’s offer. 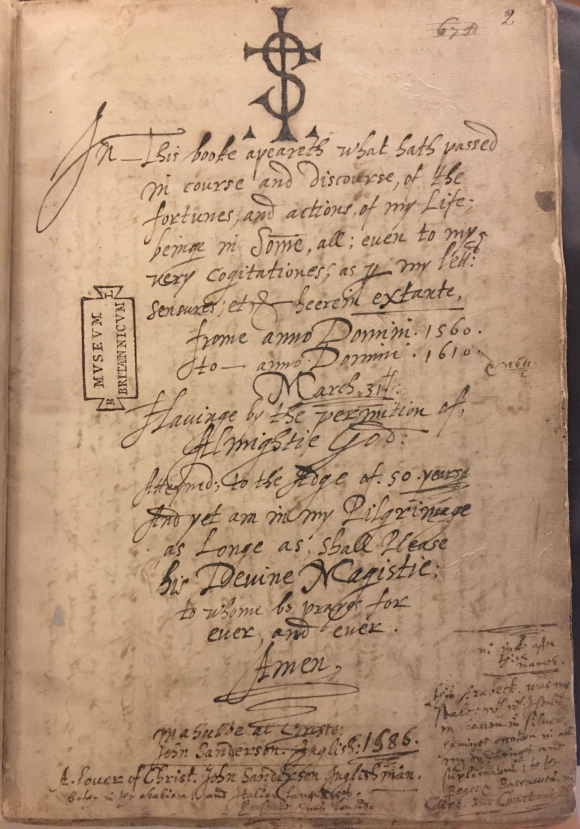 Born in 1560 John Sanderson is a rare example of an early modern man of trade who wrote a record of his life.  His miscellaneous commonplace book is held in the British Library manuscript collection (BL Lansdowne MS 241).  His short ‘autobiography’, entitled by its author ‘a record of the birthe and fortunes of John Sanderson, alias Bedic’, noted down not only Sanderson’s illnesses, fortunes and misfortunes, but also and very keenly, his many judgments (‘censures’) about other people.  And there were loads of them.

Reading Sanderson’s account, anyone who has ever been stuck in a riotous house-share with horrible house-mates will soon start to feel sympathy.  Sanderson claims that the ambassador Barton ‘vexed me to my very soule,’ although his foremost adversary seems to have been William Aldrich, who Sanderson claims to have ‘stealingly’ struck him.  After Sanderson struck him back the ambassador Barton himself ‘laid his fists one my face for so doinge, and confined me to my chamber.’  After all these fisticuffs Barton sent a stern letter to Sanderson’s room, threatening to deport him back home to England.  After the altercation Aldrich refused to dine in the same table with Sanderson and complained that he ‘outlooked him'.  Ill-will continued for some time, although the ambassador eventually tried to make amends by gifting Sanderson ‘a redd velvett goune wch the Gran Sigr had vested him with before he kiste his hand'.  Additional proof of this reconciliation was that Sanderson later acted as the ambassador’s deputy when Barton famously, and somewhat notoriously, accompanied the Ottoman sultan Mehmet III to his wars in Hungary.  However, the scuffles continued between Sanderson, Aldrich, and the steward of the house.

Based on his writings, Sanderson was a keen observer of the faults of other people.  He listed all the names or sometimes the initials of his ‘frenemies’, saying that ‘many other agreevances and discontents passed whilst I was ther, in comp of Bushell, Aldrich, Mons, Wragg, Rivers, Babington’...  The animosities between Sanderson and the two Aldrich brothers, William and Jonas, were explained by the different ‘conditions and qualities’ of the men, whereas the differences between Sanderson and Barton were probably due to breaching social hierarchies and trying to police Barton’s behaviour too much (possibly due to toxic masculine bravado).  Sanderson gave all these men derogatory nicknames ranging from ‘wicked athiesticall knave’ to ‘poysoner’ and ‘whoremonger’ and continued to record their deaths with no small amount of glee.

The selected texts from this old ledger volume bought by Sanderson’s father were edited by William Foster, the then president of the Hakluyt Society and published in 1931.  You can find this fascinating manuscript as part of the Lansdowne collection.

This blog post is the second in a collaborative series with Medieval and Early Modern Orients (MEMOs).  On the last Monday of every month, both Untold Lives and MEMOs' own blog will feature a post written by a member of the MEMOs team, showcasing their research in the British Library collections.  Follow the conversation on Twitter with the hashtag #BLMEMOS.