Leendert Hasenbosch’s diary: the story of a gay soldier marooned on a desert island

Leendert Hasenbosch, a Dutch East India Company soldier, was marooned on Ascension Island as punishment for sodomy in 1725.  Abandoned on an uninhabited island, he kept a diary of his days as a castaway and his struggle for survival. 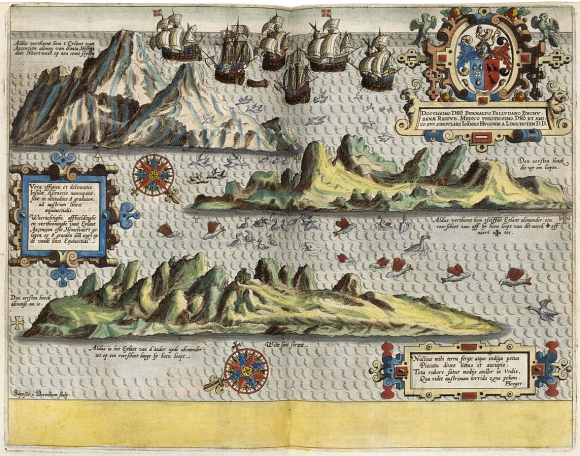 This diary was later recovered and published as Sodomy Punish’d: Being a True and Exact Relation of what befell to one Leondert Hussenlosch (London, 1726), surviving in a single copy in the British Library.  It is a rare first-hand account of the lived-experience and hardships of a gay man at a time when sexual relationships between men were punishable by death. 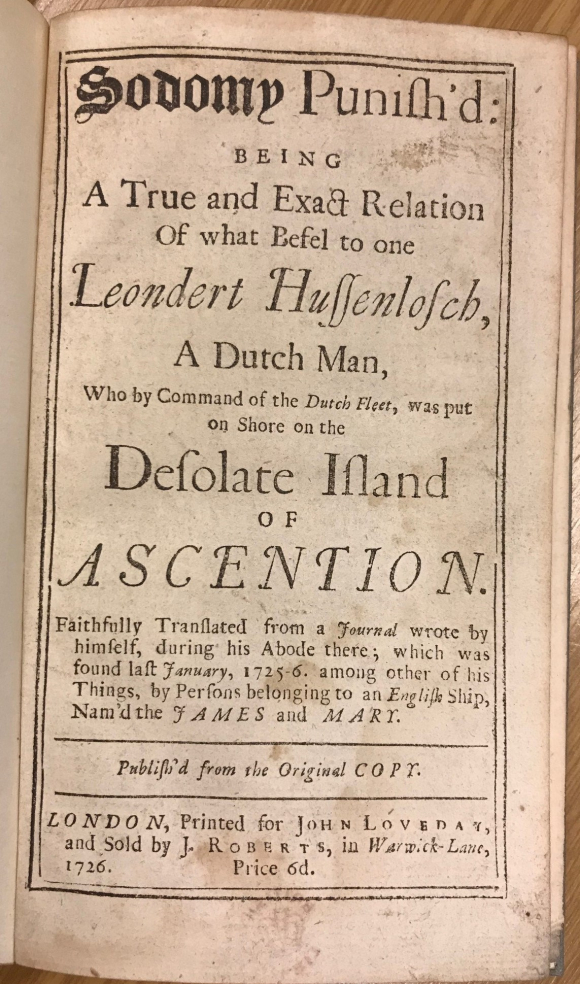 Leendert Hasenbosch spent his first month on the island searching for water and praying for rescue.  Lonely, he wrote in his diary and tried to keep a bird as a pet but it died.

May 5: '…They put on shore with me a cask of water, two buckets an old frying pan &c.  I made a tent on the beech'.
May 8: '…I trust God Almighty will deliver me by some ship that may touch here'.
May 11: 'I sat down very discontented, being almost dead with thirst'.
May 12: 'This afternoon put some onions, pease and calavances into the ground near my tent to try if they would grow'.

In June, Hasenbosch experienced hallucinations and his situation got increasingly desperate.  He linked these visions to his guilty conscience and prayed for 'forgiveness for [his] sins'.  He was haunted by 'devilish spirits', including one with 'the resemblance of a man [he] had been well acquainted with, whose name [he is] afraid to mention; he staid with [him] for some time'.

By August, Hasenbosch’s water supply had dried up and he was beginning to starve.  He’d failed to catch any of the goats on the island and rats had eaten his crops.  His entries became shorter and preoccupied:
August 8 to 10: 'Nothing particular. No rain'.
August 12 to 16: 'Still no rain'.
August 17: 'No rain falling. I am in the most deplorable condition…'

He resorted to desperate measures:
August 22: 'This morning I caught a large turtle, and drank near a quart of her blood, and took some eggs and fat…I drank my own urine'.

Hasenbosch survived for just over another month on eggs, turtle meat, blood and urine:
October 7: 'I was again oblig’d to drink my own urine; I likewise eat raw flesh'.
From October 9 to 14: 'I liv’d as before'. 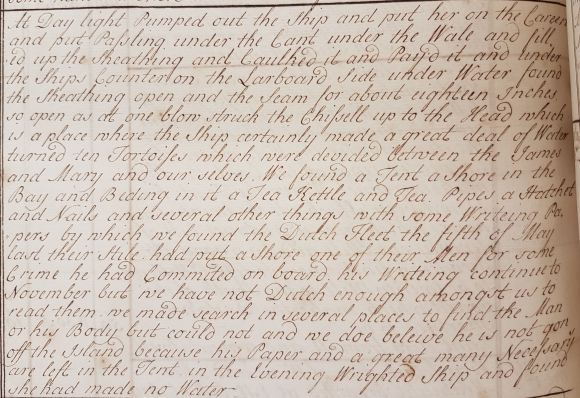 In January 1726, the East India Company ship Compton discovered Hasenbosch’s camp – a tent, bedding, and items including a kettle and tea, pipes, a hatchet and nails, and his diary up to November.  The Compton’s men searched in vain for the man or his body.  They did not believe that he had left the island because ‘his Paper and a great many Necessarys’ had been left in the tent.

Tragically, there are two fresh water sources on Ascension Island but Hasenbosch didn’t find either.  His diary was brought back in the Compton to England where it was published.  Other editions followed, some more homophobic than others.  His identity was only determined centuries later.

As the sailors didn’t find a skeleton in Leendert Hasenbosch’s camp, there is a glimmer of hope that maybe, just maybe, he was rescued by a passing ship and survived.