Letters of James Jackson of the Royal Navy – Part 1

An interesting new addition to the India Office Private Papers gives a glimpse into the life of a seaman in the British Royal Navy in the late 18th century.  Little is known about James Jackson other than he was serving aboard HMS Suffolk from 1793 to 1796.  His letters were sent home to his ‘brother and sister’ who were living in Enfield, England at that time.

The first three letters were written at Spithead on 18 November 1793, 5 January 1794 and 19 April 1794 where the Suffolk was being refitted in preparation for sailing with the next fleet to India.  In his first letter he apologises for not writing sooner ‘but was prevented from fulfilling it by our ship’s being unexpectedly ordered to sea’.  He mentions mutual friends, and says ‘I think Brother John Clarkson has met his fate poor fellow in the watery Element as well as Robert or you would have heard some tidings of him before this’. 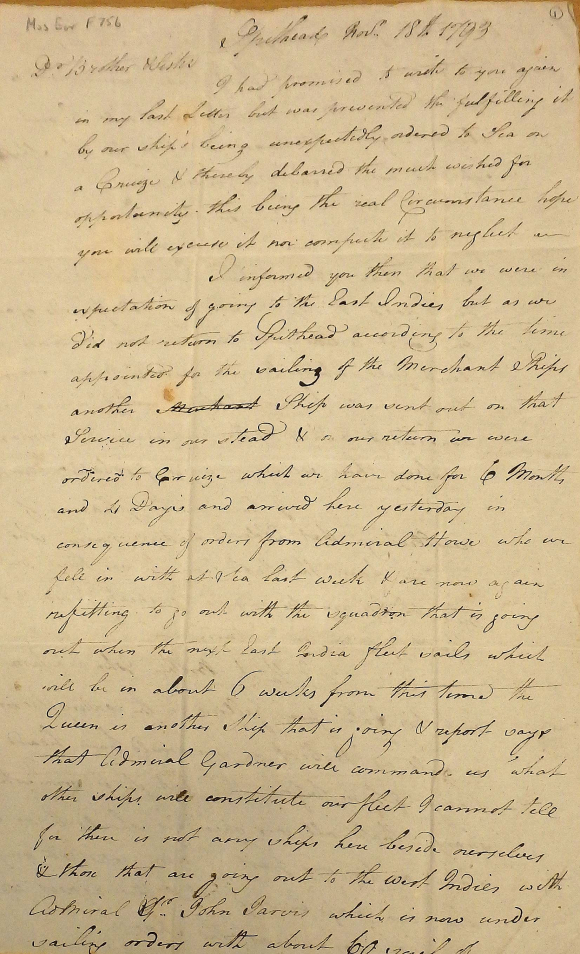 In these letters he enquires anxiously after the health of his sister who he had heard was ill, and reports a rumour that he had heard from an officer who he is friendly with that they will be continuing on to the East Indies, and that they will be attacking islands belonging to the French.  James believes that they will not be returning to England for about two years.  He mentions that if he gets the opportunity he will try to contact their brother William who is in India.  The collection does also include three letters from William Jackson in Calcutta.  He thanks them for paying the postage on their reply to his previous letter as ‘otherwise I could not redeem it at present we have not been paid as it is customary to be the last thing before we sail altho’ we are now quite ready for sea waiting for it’. 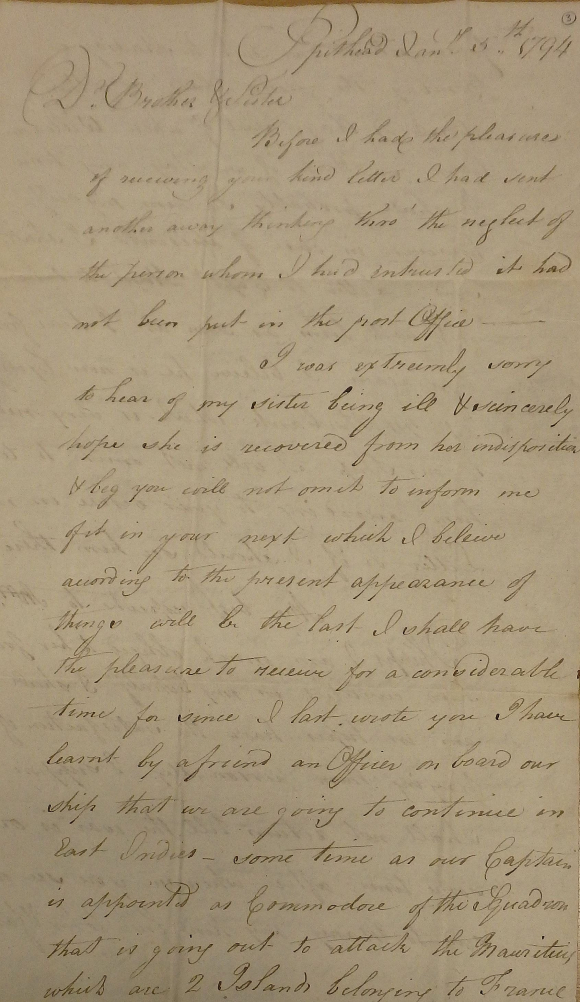 In his third letter, on the eve of sailing he wrote: ‘it is a pleasing satisfaction to me to be able to inform you that I leave this country without the least regret and in good health which I hope will be continued till my return both on my part and yours’.  He promises to write whenever he can but warns that it may be eighteen months or longer before they hear from him again.  In May 1794, the Suffolk under the command of Captain Peter Rainier led a convoy of merchant ships to Madras.  During the voyage, James was able to send off a letter home, via the East Indiaman Earl of Wycombe to St Helena, dated 6 June 1794 ‘at sea’: ‘I have this first opportunity embraced to forward you this letter according to your request as also to acquaint you that I am very well.  I might say never better only very warm for we are at this time nearly under the sun….we shall touch at Rio Janario in South America’.  He concludes ‘I wish you well but the boat is waiting alongside so adieu’. We will catch up with James in a forthcoming post.