Thomas Richardson Colledge, favourite student of Sir Astley Cooper, became a renowned medical missionary.  Educated at Rugby, with initial training at Leicester Infirmary, Colledge entered the East India Company’s service in 1819 as a ship’s surgeon.  Eight years later he joined the Company’s China factory in Macau and Canton.  He was responsible for establishing the Medical Missionary Society of China.

Details of Colledge’s twelve years in China may be found in histories of British involvement in China and the celebrated diaries of his American friend Harriet Low. Colledge’s contemporaries in China included Jardine, Dent, Lindsay, Inglis and Elliott. He is noted for his support for the dying Lord Napier, Britain’s first Chief Superintendent of Trade at Canton. Colledge left China before the First Opium War. 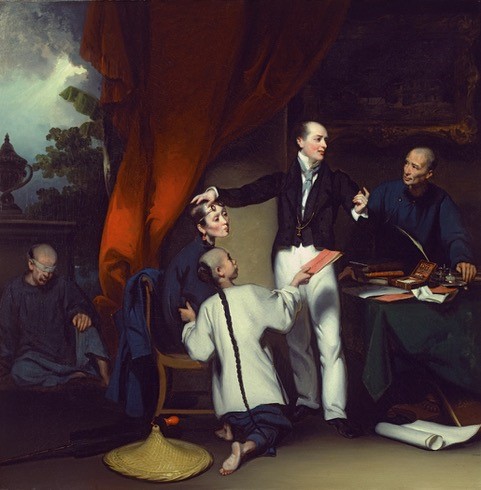 'Thomas Richardson Colledge, M.D., and His Assistant Afun in Their Ophthalmic Hospital, Macau', by George Chinnery, 1833, oil on canvas.
Gift of Cecilia Colledge, in memory of her father, Lionel Colledge, FRCS, 2003, M23017. Courtesy of the Peabody Essex Museum, Salem, MA.

Whilst there are glimpses of his later life as a highly respected opthalmic physician and pillar of Cheltenham society, there is little or nothing about the formative early period he spent at sea.  Ships’ journals in the India Office Records help shed light on these years.

Each of Colledge’s four voyages to China presented its own challenges and learning experiences.  The first three voyages were on board the East Indiaman General Harris, Captain George Welstead.

During the 1819 voyage to Penang and China, the General Harris was struck by lightning in Cape latitudes and there were many casualties.  Five men died and one man was terribly mangled.  The rest were very lucky to escape - a fire on a wooden ship carrying casks of strong spirits stored close to powder barrels was to be avoided at all costs.  Later in the voyage, the large number of sick crew placed the ship at risk when navigating the dangerous shoals of the Palawan Passage.

The second voyage in 1821 was far longer and even more trying .  Within days of arrival in Madras, cholera ran through the ship.  To Colledge’s credit only one man died.  However Colledge was lucky to survive when a boat returning him to the ship capsized.

Some months later the General Harris assisted the General Kyd, lying dangerously beached on the notorious South Sands of the Malacca Straits.  The two ships then encountered a typhoon which reduced the General Harris to bare poles.  After stopping for essential repairs in St John’s Bay, the ships arrived in China to be caught up in a suspension of trade caused by a dispute between the Chinese and HMS Topaze.  For several weeks the General Harris was held back at Chuenpi and then ordered to sail back to the Straits of Malacca to return the following season.  The General Harris arrived home in April 1823, after an absence of more than two years.

The voyage of the General Harris in 1824 was disrupted by a tornado, ill-discipline, and an uncharted reef in the South China Sea.  A minor collision in Anjer was followed by a furious gale off the Cape which brought a great deal of water on board.

Colledge’s fourth and last voyage to China on the troop transport Abercrombie Robinson, Captain John Innes, appears to have been relatively uneventful.  The journal records two births on board and the punishment of Private John Kent, who received 150 lashes out of a sentence of 300.

After eight years at sea, the offer of a posting in China must have been a most attractive proposition!