In the late 1830s both the Madras Military Male Orphan Asylum and Madras Female Orphan Asylum were experiencing difficulty finding employment for children old enough to leave the institution.  The Madras Government approached the authorities in New South Wales outlining a scheme for sending children to be apprenticed there.  It was said that the Asylum pupils’ superior education and the care bestowed on their morals might make them a valuable acquisition to the colony, especially the girls. 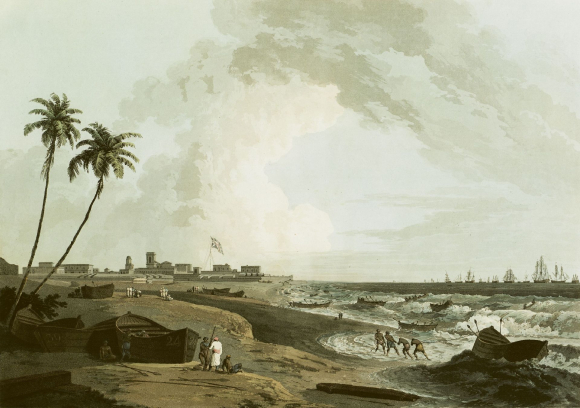 The New South Wales authorities agreed on condition that the children would be at least twelve years of age and of ‘pure European descent’.  They were to be sent to Sydney free of charge and would be apprenticed in the same way as children from local orphan schools.  Apprenticeships lasted until 21 for males and until 21 or marriage for females.  Masters or mistresses had to provide sufficient and suitable food, clothing and bedding, and make payments into the Savings Bank of New South Wales which were handed to the apprentice, with accrued interest, at the end of their term.  When practicable, apprentices had to attend divine service at least once every Sunday.  Particular attention was to be given to the apprentice’s morals.  Justices were to investigate complaints about ill-treatment by masters, lack of provisions etc, as well as misdemeanours by apprentices.

The Madras Military Male Orphan Asylum compiled a list in August 1840 of seven boys willing to emigrate who met the criteria set by New South Wales.

The terms of emigration and apprenticeship were explained carefully to these boys.  They arrived in Sydney in the Sesostris in February 1841.

Five more lads from the Asylum ‘anxious to emigrate’ took their passage in the British Sovereign (or Royal Sovereign) which arrived in Sydney in December 1841.

Our next post will tell the story of what happened to these twelve boys when they arrived in New South Wales.

Further reading:
IOR/F/4/1855/78481 Proposal of John Sullivan that boy and girl pupils from the Madras Military Male and Female Orphan Asylums should be sent as apprentices to New South Wales - Madras Government forward the proposal to the New South Wales Government, 1838-1839.
IOR/F/4/1916/82082 Seven boys of the Madras Military Male Orphan Asylum are at their own request sent to New South Wales to be apprenticed under the Government of that colony - the Madras Government provides them with a passage to Sydney, [1834]-1841.
Findmypast for baptisms, marriages and burials from the India Office Records.
Trove for Australian newspaper reports.
FIBIS wiki.