On 22 February 1841 the first group of boys from the Madras Military Male Orphan Asylum arrived safely in New South Wales on board the Sesostris.  The Sydney Monitor and Commercial Advertiser wrote: ‘Seven youths, all of whom have been taught trades. have arrived from Madras, to the care of the Government of this Colony.  These youthful immigrants, all of whom are natives of Madras, are said to have been reared in one of the public Orphan Schools.  They promise to be excellent mechanics, and are very intelligent.  Those who have arrived are tailors, carpenters, and printers’. 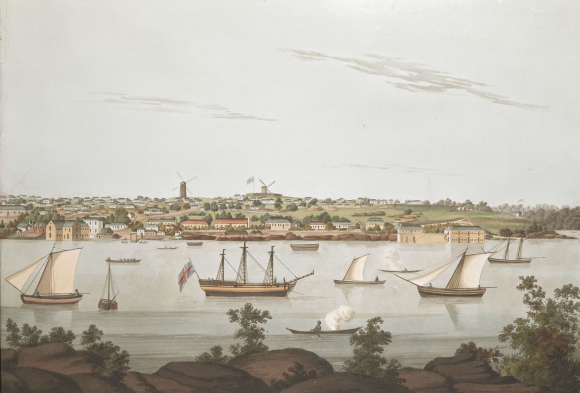 New South Wales - View of Sydney, from the east side of the cove by John Heaviside Clark (1810) BL flickr

The boys were kept at the Orphan School for two or three months so they could adjust to the climate before being apprenticed.  The New South Wales government promised that great care would be taken to find suitable masters for them, and the East India Company directors in London were keen for the Madras authorities to obtain reports from Australia on the boys.

A report on the Sesostris boys was sent in February 1844.
• James Marlow was apprenticed to Alexander Martin of the Cowpastures as a farmer.  He was generally well-behaved although somewhat sullen, and was becoming a useful worker.
• Christopher Connors, Samuel Hobart and John Harris were apprenticed as shoemakers to William Mackie, J. Fletcher and James Scott respectively.  All were diligent and well-behaved.
• William Bird was apprenticed as gardener to Henry Cox. a magistrate residing at Penrith.  Cox had no reason to be dissatisfied with William, who displayed ‘no symptom of vice in his disposition’.
• James Barry (named as John in the report) had been apprenticed to Captain G. B. Christmas as a miller who stated that the boy’s behaviour was very bad at first but now greatly improved.  His weak constitution and small size prevented him from being employed in the mill at present and he was on light work until he gained strength.
• James Mackin was apprenticed to Mr Urquhart as a coachbuilder.  His initial stubborn disposition had improved and he was making good progress.

In October 1842 the New South Wales government reported on the boys who had arrived in December 1841 in the British Sovereign (also called Royal Sovereign in the records).
• Matthew Thornhill and Edward Wallace had been apprenticed to the Government Printer in Sydney.  Both were doing well, especially Matthew who was already able to work as a compositor.  Edward was not so advanced so he was still attending the Protestant Parochial School of St James every morning.
• Matthew and James Bradshaw were apprenticed to Robert Dawson, a magistrate living four miles from Sydney.  Matthew was a gardener and James a house servant.  At first, Matthew had tried being a tailor but had not made much progress.  James had a skull fracture before arriving in Sydney and so a house job had seemed best for him.  Both boys were free from any vicious habits, but rather dull and indolent.  The Australians believed that their indolence could be attributed to early habits contracted in India.
• James Callaghan had poor sight so he had been kept in the Male Orphan School of New South Wales.  He was now considered fit for apprenticeship and would be placed once a suitable master was found.

Our next post will tell the story of the girl emigrants from the Madras Female Orphan Asylum.