Discussions about sending girls to New South Wales from the Madras Female Orphan Asylum took place throughout 1841 and 1842.  The Asylum drew up a list of girls willing to emigrate, with details of their ‘Character, Disposition, and Proficiency’.
• Caroline Davey – 13 years 11 months.  Generally quiet and obliging, not far advanced in learning.
• Mary Ann Cardwell – 13 years 7 months, and Caroline Smith – 14 years 11 months.  Both generally quick, but indifferent workers.
• Mary Watts – 15 years 2 months, and Ellen Tooner – 13 years 4 months.  Both generally quiet but not very good-tempered.

On 3 January 1843 the ship Duchess of Kent arrived in Sydney with these five girls travelling in steerage.  There were a number of convicts on board but no objection was raised because a ‘steady and respectable matron’ had been employed to look after the girls in case they might be ‘corrupted’.  Mrs Wooller accompanied the girls for a fee of £35, half paid in advance and half paid on arrival in Australia once the ship’s captain had confirmed that she had discharged her duties properly.  She had recently accompanied the family of Major Cortlandt Taylor from New South Wales to Madras and now wished to return home to Hobart Town. 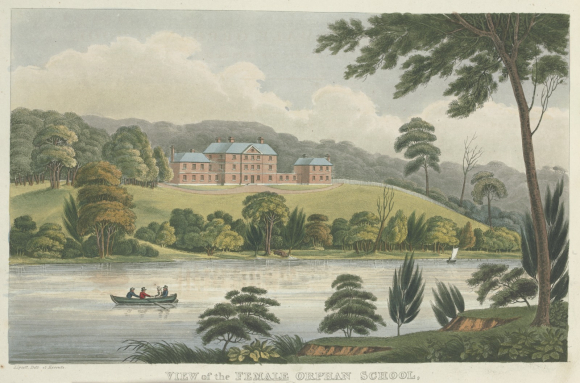 The girls were taken initially to the Female Orphan School near Parramatta, and the New South Wales authorities said a report on their ‘disposal’ would be sent after six months.  A letter from Sydney to Madras dated 26 April 1844 explained that the enclosed report from the school matron had been delayed because of a reluctance to give an unfavourable one.  It was said that the girls had been ‘kept in India too long, having apparently acquired confirmed habits of indolence’.  In future, no girls should be sent from Madras above the age of ten or eleven.  The girls’ wages when placed as domestic servants were £5 per annum, increasing by £1 each year to a maximum of £10.

• Caroline Davey – Placed on 7 August 1843 with Mrs Hallen at Prospect as a children’s maid.  Conduct good but sent back to school on 23 August because she had ringworm (not true).  Went in September to Mr Pearse, a farmer at Seven Hills.  Nothing heard of her since.
• Mary Ann Cardwell – Indolent at school, not troubling to learn anything.  Placed with Dr Bell of Windsor on 18 July 1843 as a children’s maid.  Nothing heard of her since.
• Caroline Smith – Sullen and idle.  Went to Mr Mills, schoolmaster at Parramatta, on 25 July 1843 as a children’s maid.  Conduct so bad that she was only kept there two months.  Then sent to Mr Buchanan, a clerk at North Shore, without wages.  Was returned again to the school with ‘a most disgraceful character’.
• Mary Watts – Very good conduct.  Went on 25 July 1843 to live with Dr Smith of 99th Regiment as children’s maid, but returned on 2 December after the baby died.  Went on 4 December to Mr Fletcher, shoemaker in George Street Sydney.
• Ellen Tooner – Still in the school, ‘the worst conducted Girl I ever met with’.  Would learn nothing even though great pains were taken with her.

Here the evidence from India about the girls’ lives  appears to end.  Australian archives might reveal what happened next to the children sent from Madras.