Looting of golden bells from the Temple of Heaven

The Boxer Rebellion (1899-1900) began as an uprising against foreign influence in China and resulted in fighting between Chinese forces and an eight-nation alliance, which included Britain and Germany.  Following the conflict, troops from the foreign coalition occupied areas in northern China for over a year, during which time looting and acts of violence were common.

In 1920, the British Foreign Office was informed that an individual had approached German officials offering - for a price - evidence of such looting carried out by Indian Army personnel.  The individual believed this would interest the German government as the Treaty of Versailles required them to return looted items, and such evidence might give them some political benefit.  The Germans declined to purchase it, but its existence prompted the British to investigate the matter.

The evidence comprised communications between officers in the 16th Cavalry and inspired a flurry of correspondence between India and the UK.  Reading these, we can determine the sequence of events. 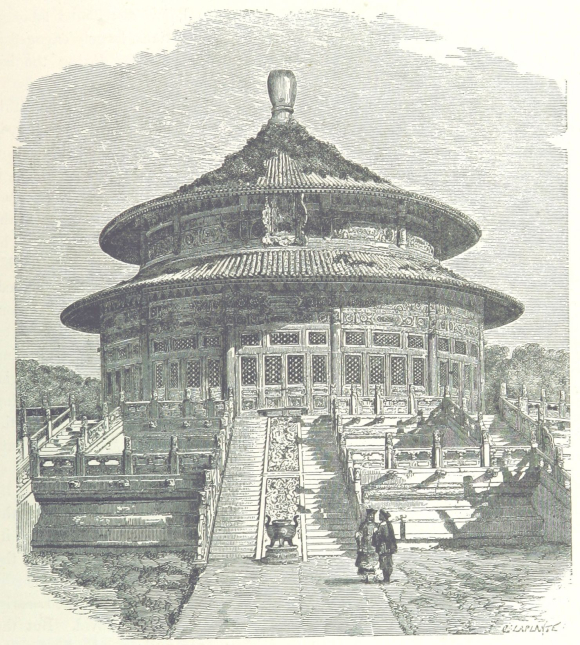 The Temple of Heaven, Peking from The Earth and its Inhabitants. The European section of the Universal Geography by E. Reclus. Edited by E. G. Ravenstein (London, 1878).

During the occupation of Peking (modern Beijing), two golden bells were taken from the Temple of Heaven by Indian Army officers; one was taken by C. E. Thornton of the 16th Cavalry from what was subsequently described as a rubbish heap.  The commanding officer gave permission for the bells to be taken back to India as regimental trophies, where the 16th kept theirs as mess decoration.  In 1906, while Thornton was on leave for medical reasons, other officers in the regiment voted to sell the bell.  Thornton objected, claiming that as ‘finder’ he had sole rights over the bell.  The dispute prompted Thornton to contact lawyers and the bank where the bell was temporarily stored, and the whole affair was made public.  Ultimately, the British government decided that as the bells were found in ‘rubbish’ and as commanding officers had given permission for their removal, no looting had taken place.

In 1927, Mr H. Beechey started sending letters insisting on the restoration of either the bells or their value to the Temple of Heaven.  Beechey was persistent; he sent multiple letters to the Foreign Office, various politicians, the Prime Minister, and even the King-Emperor George V himself.

The recipients of his letters were dismissive of such demands; however, newspaper articles from the time suggest the general public was not.  In 1921, the Daily Express reported demands raised by Chinese voices in London for the value of the bells to be restored to the Temple.  Articles continued to appear in various papers over the next decade, but eventually the public lost interest in the story.

In 1994, there were reports in online publications of a bell returned by the Indian Government to the Temple of Heaven, one of sixteen that were taken by British troops during the Boxer Rebellion.  Whether the bells mentioned in file IOR L/MIL/7/16819 were part of this set is unclear, but perhaps there are other files in the India Office Records, waiting to be discovered, that could add to the story.

Letters of James Jackson of the Royal Navy – Part 2

A recent post on this blog introduced James Jackson, Royal Navy seaman, whose letters to his family in England have been acquired by the India Office Private Papers.  We left James aboard the HMS Suffolk sailing to India.

On 30 September 1794, James wrote from Madras Roads.  He says that they had a ‘tolerable pleasant voyage of 4 months and 9 days…but the monsoons or winter months are now very near coming on – we yesterday was drove from our anchor to sea in violent weather but are here again all well’.  Of India he says: ‘I find this country very hot but I think it pleasanter than Europe’, although he is unimpressed by the lack of good meat: ‘the beef is not bigger than your small calves of a twelvemonths growth, the sheep are also very diminutive and pigs like rats – all skin and bone’. 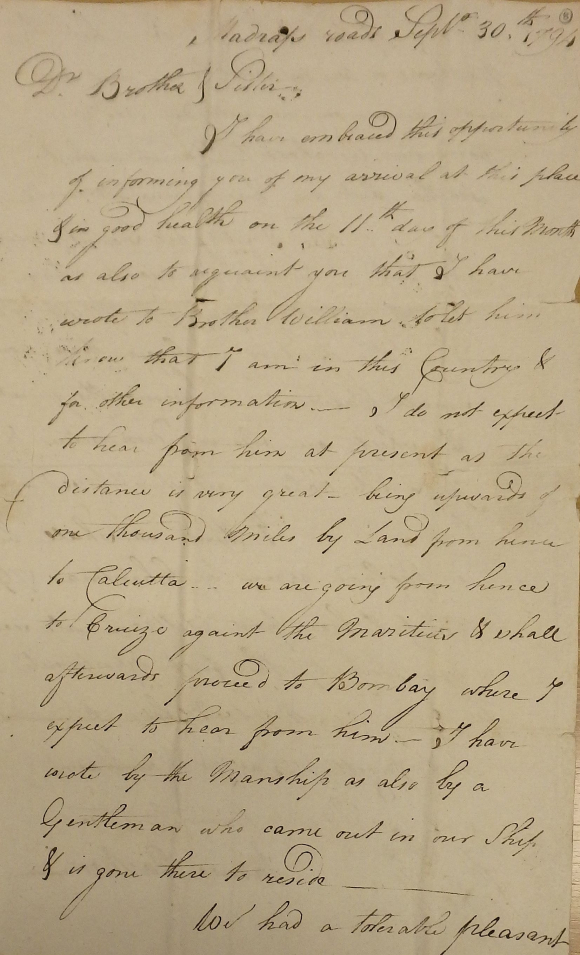 His sixth letter is dated 20 August 1795 and gives news of the British invasion of Ceylon.  He says they have been laying siege to Trincomalee for three weeks, ‘I cannot say how long they may hold it out with us – but we are determined to be victorious – it is the most valuable island the Dutch have in this country and nearly as large as England’.  The British were stopping all vessels that came to Ceylon so that the Dutch could get no supplies: ‘there is a strange vessel in sight of us now and I am going in our boat to board her’.  He also reports on the sinking of the British ship HMS Diomede, ‘but by the endeavours of all people on board the other ships here at that time – her men was saved but the loss was great happening at this critical time’.  He mentions that his brother William was well when last he heard in July, but he does not expect to see him on this voyage. 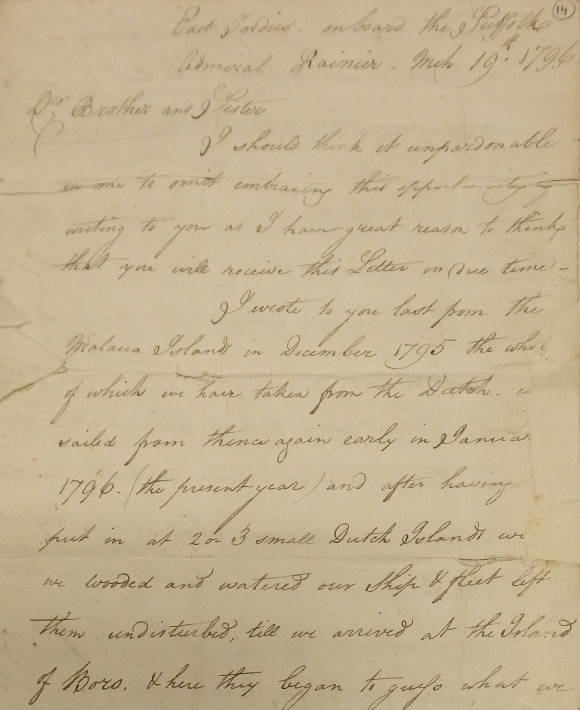 James’s last letter is dated 19 March 1796, on board the Suffolk in the East Indies.  He describes the British attacks on Amboyna (‘this island was full of cloves and other spices and their warehouses were all full’) and Banda (‘the nutmegs on this island alone are valued at two hundred thousand pounds sterling’) in the Dutch-held Molucca islands.  He expected the British ships to sail for Europe about Christmas, but the war had taken its toll: ‘we have not much above half our compliment of men, we have buried a great many indeed’, and he was worried about the lack of fresh provisions ‘as we are all upon very short allowance of victuals - what we have is badly salted - the country is very hot and unhealthy for Europeans in this part which is near the Pacific Ocean’.  However, he is hopeful ‘if our Agents for our prize money do us the least justice in nature we shall be pretty well and decently paid for our troubles’.  James concludes his letter by looking forward to meeting his family again in England.